Andrew Broad MP – spoke of his trip to Palestine 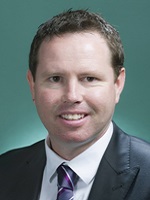 What I found was that there in the West Bank a new settlement had been put. Really, there was no justification that I could see in my mind for putting that settlement there. The Bedouins, who were accessing the well, had had their well capped and had had the water from that well taken to feed that settlement, so the Bedouins were going to have to take their water carts into town to get water.

Mr BROAD (Mallee) (16:57): I think this is a very interesting topic to be talking about. For me, as an MP who represents the Mallee, why does it matter? Why do I care? I am in the Mallee. What do I know about the Middle East? That was the thought process that went through my head as a new MP. I started to get delegations that would come and see me in my office from the Israel lobby group and the Palestinian lobby group. I got offered free trips.

I am a bit of a person who believes that you should go and have a look for yourself, so, at Christmas 2015, my wife and I self-funded a trip and went over there ourselves. We said to the Palestinian lobby group, ‘We’ll give a day to you,’ and to the Israelis, ‘We’ll give a day to you.’ We drove around through the southern end, up to the Golan Heights. I just want to reflect on some of what I saw.

Can I first say that it is always the children that suffer. Whenever we have a conflict of humankind where we cannot sort our stuff out, it is always the children that suffer. It was brought home to me that it actually does matter what Australia thinks, because really there are four or five major nations in the world that do take a position on these issues: the United States, Great Britain, members of the European Union and Australia. It actually does matter what our view is.

If I can reflect on what my view is, it is that little grace is given on either side. I went down to Jericho and, being a farmer, I wanted to sit down with the Bedouins. So we sat down with the Bedouins and ate some rice, and they asked whether my wife, who was accompanying me, was my first wife. I said, ‘No, she’s my only; I don’t need more than one.’ We talked about livestock, the common language. What I found was that there in the West Bank a new settlement had been put. Really, there was no justification that I could see in my mind for putting that settlement there. The Bedouins, who were accessing the well, had had their well capped and had had the water from that well taken to feed that settlement, so the Bedouins were going to have to take their water carts into town to get water.

Now, the farmer in me gets thinking, ‘Well, what does a 30,000-litre tank cost?’—a couple of thousand dollars. What would it have mattered if they had just put a tank there as well, and put a water supply for the Bedouin? It would have cost about $5,000—small steps of grace! I guess this is the take-home message that I got from my trip to Israel: amazing country, amazing people—both Palestinians and Israelis—but unfortunately, increasingly fewer steps of grace. When you give steps of grace, you begin to see the person who is a Palestinian, if you are an Israeli, as a person. If you are a Palestinian, you see the Israeli not as an oppressor but as a person. I have a theory from my observations when travelling: it is that all people really just want to see their child have a better standard of life than they had. It does not have to be a First World standard; just a better standard of life.

I fear about the conflict that appears to be growing in the Middle East. It is because of that lack of graciousness with one another that the Palestinian people are seeing that their children are not having that better standard of life, which is a great political failing of the Israeli government, I have to say. Whilst the Israeli government is seeing their view that security is the most important thing to them—and I must admit, I was at the Golan Heights, and there was Syria just over there, and the Syria conflict was taking place, and I felt very safe in the Golan Heights because of the Israeli defence force—they have missed the one key point, which is that unless you distribute some graciousness, you actually undermine your own domestic security.

Those are some of the reflections I have. In the few minutes remaining I will say that Israel is a great nation and the Palestinians are a proud people. I found that even when I had the meetings on both sides, even internally, no-one could completely agree on what the answers were, and I do not profess to know the answers. But as we individually take small steps of graciousness towards one another we go a long way towards solving the problems of the Middle East. Until governments on both sides commit to that, I think we will continue to have a conflict for many years to come.