Andrew Wilkie MP – spoke about “rethinking our approach” to Palestine 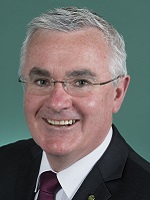 Palestine is another area where we need to rethink our approach, because the situation for the Palestinian people is inarguably dire as Israel continues to illegally development settlements in Palestinian territory. Former Foreign Minister Bob Carr has acknowledged that these settlements are not legal, but the current government will not even do that. What Australia must do is recognise the need for a Palestinian state and condemn Israel’s illegal acts of settlement and violence. It is alarming that too many of our political leaders appear to be beholden to Israeli interests at the expense of the Palestinian people.

Mr WILKIE (Denison) (12:37): I present this petition today which has been accepted by the Standing Committee on Petitions.

The petition read as follows—

This petition of concerned citizens of Australia put forward by the Parish of St Joseph’s Hobart: draws to the attention of the house the large cuts to Foreign Aid in 2015-2016 Federal Budget.

Caritas and other international aid agencies state that these cuts will significantly reduce or close vital aid and humanitarian programs. Australia’s ability to provide essential support in health, education, sustainable livelihoods and resilience to natural disasters in vulnerable communities will be reduced.

Australia is a global leader in the movement to end extreme poverty. While helping lift vulnerable people out of poverty and saving lives, foreign aid serves Australia’s national interests, especially in the Asia Pacific region. The Budget cuts take Australian aid to its lowest level in six decades. A wealthy country with AAA economic ratings, these cuts put Australia near the bottom of the OECD rankings as a contributor to international aid and development.

Australia has the capacity to be compassionate and financially astute. We therefore ask the House to:

(a) Recommit to the government’s promise in the 200 as part of the Millennium Development Goals of raising Foreign Aid contributions to 0.7% of Gross national Income, Immediately ensuring Australia meets its international obligations.

(b) Resource the 2030 Agenda for Sustainable Development and the 17 Development Goals which were adopted and endorsed by the Honourable Julie Bishop at the United Nations General Meeting in September.

Australia is a rich and fortunate country. We can afford to be the best international citizen, we can afford to be most generous in our assistance to countries less fortunate than us and we can afford to be much more active diplomatically when the situation calls for it. Take West Papua, for example. This territory just north of Australia was fraudulently acquired by Indonesia in the 1960s thanks to a dodgy referendum, and the citizens of West Papua have been suffering human rights abuses ever since. The people of West Papua have an inalienable right to determine their circumstances in the future. In fact, the United Nations Declaration on the Granting of Independence to Colonial Countries and Peoples makes it clear that all colonised peoples have the right to self-determination. But, remarkably, the Australian government has been virtually silent on the issue. And it is not just that we have been silent. Indeed, there are claims that Australia even helps fund and training the Indonesian security forces who are carrying out the atrocities. So we are not just complicit in these human rights abuses; we are actually a part of the problem.

Another example is the plight of those unfortunate souls in Camp Ashraf, now Camp Liberty, in Iraq. Since the 1980s these camps have been home to over 2,000 displaced Iranians, mostly supporters of the People’s Mojahedin Organization of Iran, the country’s main opposition group. They have been subject to barbaric attacks, including when the camp was stormed by Iraqi security forces in 2009, killing nine people, and just last month when the camp was struck by a barrage of around 80 rockets, killing 23 people and injuring dozens more. These are horrific acts of violence. Countries like Australia—rich and fortunate countries—need to take immediate international action to protect these vulnerable people. Indeed, we need to put whatever pressure we can on the Iraqi government to ensure that these attacks stop and that these people are safe.

Palestine is another area where we need to rethink our approach, because the situation for the Palestinian people is inarguably dire as Israel continues to illegally development settlements in Palestinian territory. Former Foreign Minister Bob Carr has acknowledged that these settlements are not legal, but the current government will not even do that. What Australia must do is recognise the need for a Palestinian state and condemn Israel’s illegal acts of settlement and violence. It is alarming that too many of our political leaders appear to be beholden to Israeli interests at the expense of the Palestinian people.

Australia can afford to be much more generous when it comes to our international aid contribution. After the latest round of cuts to the aid budget Australia’s contribution will be sitting at around 0.2 per cent of gross national income. That is an abysmally low figure when you compare it to other countries. Our aid program works. We know that it saves lives, improves lives for people in the developing world and is consistent with Australia’s economic and security best interest.

The community understands this, so it is no wonder I am able to table the petition today compiled by a group from the St Joseph’s Church in Hobart, in my electorate of Denison, who are concerned with the most recent cuts to the aid budget and are calling on the government to recommit to its promise in the year 2000 to raise foreign aid contributions to 0.7 per cent of gross national income. This petition is just a small snapshot of views from my electorate; more broadly, it is a call echoed by people all around the country. Once upon a time it was also government policy—but, shamefully, not any more. As I have said many times in this place, Australia is one of the most wealthy and fortunate countries in the world; but, too often, we do not act like it. It is time we started acting like the good international citizen the world expects us to be and started being part of the solution, not part of the problem.