Anne Stanley MP – condemned Israel’s “use of banned weapons, tear gas and guns fired at worshippers” at the al-Aqsa Mosque during the month of Ramadan 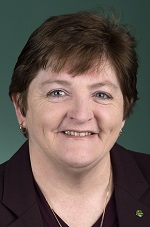 The world has seen further escalation of violence with the bombing of al-Aqsa Mosque. I’m deeply concerned by the violence in Gaza, in Jerusalem and across Palestine and Israel. The escalation of violence, destruction and the loss of life is heartbreaking for many around the world; however, it is far too familiar for those experiencing it firsthand. I welcome the ceasefire between the two parties and will always endorse every call for de-escalation and a return to calm.

Ms STANLEY (Werriwa—Opposition Whip) (19:49): The month of Ramadan came to an end earlier this month. For many it was a joyous time, following the health restrictions of last year’s Ramadan and COVID lockdown. Families, friends and colleagues were once again able to come together during the holiest month of the year for Muslims, including many in Werriwa.

I was honoured to receive so many invitations, and it was with immense pleasure that I attended iftars during the month. Thank you to all those who offered invitations that I was not able to accept because of other commitments. I would like to thank Mr Ayman Alwan, principal of Al Amanah College; the Islamic Charity Projects Association; Mr Aaron Boyd, principal of Unity Grammar; the Sydney Bangladeshi community and Selima Begum; May Jouni and principal Kylie Landrigan at Lurnea High School for inviting me to all of your events. These events highlight to me what is great about our community when it comes together. They are full of not only great hospitality and food but also genuine warmth and willingness to share information about customs and religion. Each of them had a spirit of inclusivity and were attended by a variety of people from all parts of our community. They shared stories of fasting and sacrifice. The iftars also celebrated the success of students with almost perfect HSC results and university degrees.

These events show that we have more in common than we think we do and that, when our community is built on respect, warmth, honour and tolerance, we are all better for it. Regardless of your politics, religion or culture, one of the truly great qualities of our democratic multicultural nation is that we are able to practise our beliefs peacefully and with each other. Unfortunately the same cannot be said for many places around the world. In recent years we’ve seen an escalation in conflict and persecution of peoples, particularly on religious grounds. Article 18 of the United Nations Universal Declaration of Human Rights states that everyone has the right to freedom of thought, conscience and religion. This right includes the freedom to practise and observe. Since my election, I have met with many people whose birthplaces are rocked by unrest: the Uighurs who have not heard from friends and family for many years, Cambodians who have been subject to threats in this country, Kurdish who have family in Turkey, and the Mandaeans whose family and friends have been persecuted for more than three decades.

The world has seen further escalation of violence with the bombing of al-Aqsa Mosque. I’m deeply concerned by the violence in Gaza, in Jerusalem and across Palestine and Israel. The escalation of violence, destruction and the loss of life is heartbreaking for many around the world; however, it is far too familiar for those experiencing it firsthand. I welcome the ceasefire between the two parties and will always endorse every call for de-escalation and a return to calm. However, the use of banned weapons, tear gas and guns fired at worshippers at one of Islam’s holiest sites during the holiest month of the year is unsettling.

Labor condemns all acts of violence and all violations of human rights. Australia should be part of an effective multilateral response to all issues related to human rights. There is no justification for rocket attacks on civilians and no justification for using white phosphorus in artillery shells. My office has received hundreds of emails about the latest conflict. For over two weeks, there have been tens of thousands gathering in cities across the country and across the world. Protesters and activists are not unreasonable when they call for an end to the destruction and the end of forced evictions. I stand with Labor and Foreign Minister Payne in their calls for a halt in action that escalates tensions between Israel and Palestine, including land appropriations, forced evictions, demolitions and settlement activity. Labor has always believed in the rights of Palestinians and the Israelis to live with secure and recognised borders. It is committed to a two-state solution. Any lasting resolution to the Middle East conflict cannot be at the expense of either the Palestinians or the Israelis. The only way that a two-state solution can be achieved is through a negotiated outcome between the two parties based on human rights consistent with international law. I hope the incitement of hate and the cycle of tension, escalation and destruction comes to an end. My thoughts are with the Palestinian and Israeli people during this time.