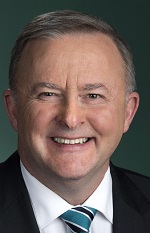 …when I sat with Joe and his dad, who was, of course, born in Bethlehem, in the beach camp at Gaza and looked at the humiliation which Palestinians were forced to undergo in queuing to try to get across to get work each and every day, and the ongoing extreme poverty and lack of rights that people were subjected to, and also the lack of rights for the Israelis when you saw very young people with guns bigger than they were standing on corners in Jerusalem—made it very clear that you cannot have security in those circumstances, where essentially Bethlehem, Jerusalem and Ramallah are really just suburbs of the one place.

Mr ALBANESE (Grayndler) (16:55): I am pleased to be able to add a contribution to the statements that have been made on the retirement of Joe Hockey, and I join with the Prime Minister, the Leader of the Opposition and others, who have acknowledged that Joe Hockey has been one of the most significant figures in the House of Representatives and in Australian politics over the last two decades.

Like me, Joe was elected on 2 March 1996, and immediately after his election he was appointed as chair of the Sydney Airport Community Forum. The Labor Party had made, in the latter years of the Hawke and Keating governments, what I regard as a very bad decision to defer the construction of a second airport for Sydney and to proceed with the third runway. It was the deferral of the construction of a piece of infrastructure that has remained necessary for Sydney; it is still necessary for Sydney and for the nation today. Sydney is Australia’s global city, and when the third runway, the parallel runway running north-south at Sydney airport, was opened a decision was made to shut the east-west runway. That was a very bad decision indeed because not only did it lead to considerable insurrection amongst the residents to the north and south of the runway, who suffered from an absolute concentration of noise, it also led to people who had up to that point supported the second airport being at Badgerys Creek, such as the Western Sydney Regional Organisation of Councils and all its member councils, to reassess their decision. It became a debate about aircraft noise rather than a debate about the economic future of Sydney, about jobs and about the nation.

Joe Hockey, in his position as the chair of the Sydney Airport Community Forum, had a series of public meetings around Sydney to develop the long-term operating plan for that airport. There was consultation and cooperation with me personally as a member of that community consultation committee. I had been member of the community consultation committee prior to my election to the national parliament, and I had been involved in what led to the acquisition of more than 150 homes and public buildings, including a church—the oldest Coptic Church in Australia—and other public facilities, in Sydenham. There was also the insulation of more than 10,000 homes, schools, hospitals, churches and other public buildings.

Joe Hockey, during that period, was prepared to come down to Sydenham in my electorate and to sit down in the lounge rooms and the kitchens without media, and we talked through some of the solutions. One of the problems that had occurred was that many of these homes were very much of working people. They were fibro homes. I remember sitting in a house in Tempe that was due to be insulated, yet the walls of the house literally did not meet the floor of the house; there was a gap. Therefore it was completely impossible to get adequate insulation into that home.

Joe Hockey, I think, from that period on showed himself to be someone who was concerned with people. At the end of the day we can have our ideological differences in this place, but the reason why we are here is to assist the lives of people. Joe Hockey and I have major ideological differences about the role of government and the way in which the state can have an impact compared with the free market. I probably am closer to Mr McCormack and some of the Nationals in that respect than either of us would be to Joe Hockey’s free market approach.

The DEPUTY SPEAKER ( Ms Henderson ): We are all close to Mr McCormack, I have to say.

Mr ALBANESE: Joe Hockey’s statements, for example, about the age of entitlement are ones that I would have fundamental disagreement with, and from my perspective I think the people who feel entitled are quite often the big end of town and the corporate sector, who believe that their entitlements override the rights of working people over issues such as penalty rates, for example, that many people need simply to be able to survive. Notwithstanding that, Joe is someone with whom you could have an ideological or political discussion that was not personal but recognised that differences can be there but you can still have respect for people—and Joe Hockey is someone who has my respect.

Of course, eventually we got there in terms of the second airport. As did Joe and other members who had an interest, while I was the minister I certainly consulted with the process of searching for an appropriate site. In the end it is pretty clear that we came back to where we began, at Badgerys Creek, as the best site. I certainly think that I have played a role in making that decision a reality. Sometimes it needs oppositions, not just governments, to be a part of decision making.

I travelled very early on with Joe and his dad, Richard, to the Middle East—to Egypt, Jordan, Palestine and Israel. Joe and I established the Parliamentary Friends of Palestine, something that was not without controversy and is probably more controversial for the conservative side of politics. But I think that experience—when I sat with Joe and his dad, who was, of course, born in Bethlehem, in the beach camp at Gaza and looked at the humiliation which Palestinians were forced to undergo in queuing to try to get across to get work each and every day, and the ongoing extreme poverty and lack of rights that people were subjected to, and also the lack of rights for the Israelis when you saw very young people with guns bigger than they were standing on corners in Jerusalem—made it very clear that you cannot have security in those circumstances, where essentially Bethlehem, Jerusalem and Ramallah are really just suburbs of the one place. It is a very small place in terms of the distance. I was very privileged to have Joe’s wonderful father, Richard, there as well. It was a visit on which we got quite close to each other on a personal level. We got to visit Petra as well, which was an amazing experience.

If there is one criticism that I would have of Joe Hockey, though—and I will finish my contribution with this—what is it with Nickelback and his music taste? It is a tragedy that he does not understand Nick Cave or the Smiths. Someone of his generation really has no excuse for having the taste in music which he does. He quite rightly has been criticised for it and I join in that condemnation today.

To Melissa and his children, I wish them all the best and thank them for the sacrifices they have made as his family. I certainly wish Joe all the best in terms of his appointment. I was asked about it publicly and made it clear that I do not believe that because someone is on the other side of politics they should be denigrated and we should say they should not make a contribution to public life in some other fashion. I think Joe, as a former Treasurer and senior minister, is someone who could, and no doubt will, make a further outstanding contribution to serving his nation. I thank him for it.