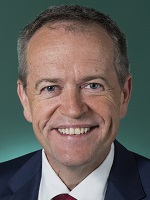 In 1949, Prime Minister Ben Chifley said that the new State of Israel would be ‘a force of special value in the world community’. Seventy years later, as we celebrate the free and prosperous democracy that Israel has become, Chifley’s words still ring true for me, for our party, for our country and for the world community.

Mr SHORTEN (Maribyrnong—Leader of the Opposition) (12:10): I thank the Prime Minister for his words and I acknowledge the many members in this House, on both sides, who share a special appreciation of this significant anniversary. And I’d like to acknowledge the presence of His Excellency, the Ambassador of Israel.

In 1949, Prime Minister Ben Chifley said that the new State of Israel would be ‘a force of special value in the world community’. Seventy years later, as we celebrate the free and prosperous democracy that Israel has become, Chifley’s words still ring true for me, for our party, for our country and for the world community. Chloe and I have had the privilege and pleasure of visiting Israel on a number of occasions. We’ve walked the ancient streets and marvelled at the modern research and innovation. And we’ve been touched every time by the kindness and generosity of the hospitality.

Australians always receive a warm welcome in Israel, particularly because the story of modern Israel contains so many great Australian moments. In 1947, the brilliant Labor internationalist HV Evatt saw Australia cast the first vote in favour of the new Jewish state in the earliest days of the United Nations. The added significance of this moment was that it represented the first time that Australia voted as an independent nation—our first break from the slavish adherence to British foreign policy. As President of the United Nations, Evatt campaigned tirelessly for Israel’s standing and independence, marshalling the conscience of the global community. Fittingly, formal diplomatic recognition and Israel’s inclusion in the ranks of the United Nations came in the final week of Evatt’s presidency. So today’s anniversary, among other things, is a reminder of Australia’s capacity to be a constructive, effective international citizen.

But, of course, the sheer history we celebrate today reaches further back than the United Nations. I think of 31 October 1917, when the 4th Australian Light Horse Brigade broke the lines at Beersheba—a famous victory and a famous cavalry charge: stockmen, ringers and jackaroos on their own horses from home. And there were 100 or so skilled and brave Aboriginal horsemen riding on the frontline. But this stunning victory was built not just on the courage of Australians but on the intelligence provided by a network of Jewish settlers in the then Palestine, led by a remarkable botanist and agronomist, a young Romanian migrant called Aaron Aaronson. These collaborators convinced the Allied command that, rather than sending our Light Horse along the sea to charge the entrenched positions at Gaza, they could use a network of unmapped oases to come through the desert and outflank the Ottomans. Just three days after that storied Australian cavalry charge, Britain issued the Balfour Declaration, an international turning point in the creation of modern Israel.

I mentioned before the personal connection that members of this House and, indeed, many Australians, share with the people and the nation of Israel. In particular, I acknowledge the members of the Jewish diaspora who fled the persecution, tyranny and atrocities of Shoah and built a new life here in Australia. Our nation has been enriched and enlarged beyond calculation by their intellect, their culture, their hard work, their generosity, their philanthropy, their faith and their love of family.

How fortunate is it that, in the midst of the evil of Europe, we had people who survived the very worst of humanity, who came face to face with unimaginable atrocity, yet what they gave to Australia wasn’t a legacy of trauma or fear but a gift of hope for the future. How fortunate was it that the wisdom of the then Australian governments was to admit refugees from war-torn areas to help contribute to the Australian story. I know their children and grandchildren hold the memory of their ancestors’ courage high, and so do we.

Anniversaries are always an important time for reflection. The hard truth is that, 70 years after Israel’s recognition, peace and security still elude the region. All of us in this place should support the right of the people of Israel to live safely within secure borders. And, as a true friend of Israel, my party supports strongly a two-state solution. We expect the Palestinian leadership and their supporters throughout the Middle East to recognise Israel’s legitimate right to security. At the same time, we recognise the people of Palestine’s legitimate aspiration for a state of their own. This will take leadership from both sides to deal with the roadblocks to peace, from settlements, to land swaps, to fundamental provisions such as security and borders—difficulties which we in Australia find hard to imagine, protected as we are by being a nation occupying a continent surrounded by ocean.

Modern Israel came about, in part, because of the success of negotiation; because nations found the capacity to sit at the table, to find common ground and to reach agreement. We need to hold onto that hope and that determination and look forward to, in the years and decades ahead, a just, secure and lasting peace for all the peoples of the Middle East.