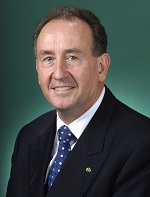 The reality of the BDS movement in Australia is that it has been captured by political parties whose main agenda is not the welfare of the Palestinians under occupation or for a peaceful solution in the Middle East.

Mr MURPHY (Reid) (12:58): More than 10 per cent of my constituents are of Muslim faith and about six per cent are of Middle East background. In a letter to former Israeli Prime Minister Yitzhak Rabin in 1993, former PLO Chairman Yasser Arafat wrote:

The PLO recognizes the right of the state of Israel to exist in peace and security. The PLO accepts United Nations Security Council resolutions 242 and 338.

This commitment was never reciprocated by Israel, which has not recognised the state of Palestine or accepted resolutions 242 and 338, which require Israel to withdraw from the 1967-occupied territories. The Palestinians are annoyed that two decades of face-to-face talks between Israel and the PLO have not delivered Palestinian national aspirations but have prolonged and deepened the Israeli occupation while making Palestinian institutions weaker. The failure of the United States to mediate a peace agreement has led the Palestinian leadership to conclude that, although it has done everything that was asked of it, from recognising Israel, maintaining security and institution building to continuing peace talks, the West has not delivered its end of the bargain. Some people have denigrated the Palestinian application to the United Nations as a unilateral move for statehood or a move to delegitimise Israel. Neither is true. It is not even the preferred course of action of the Palestinian leaders. The credibility of Palestinian Authority President Mahmoud Abbas is based on a promise to bring change through peace negotiations. The failure of the peace process to deliver anything for the Palestinians has led Mr Abbas to try the UN strategy. He has said repeatedly that the United Nations bid is a measure of last resort and he prefers direct bilateral negotiations with Israel.

The Palestinians under military occupation want freedom and human rights. With the peace process at a dead end, many Palestinians have concluded that perhaps there are no peaceful options remaining. The leadership’s UN bid was partly in response to this popular pressure. The Palestinians’ chief negotiator, Saeb Erekat, said that, until Israel and the United States can pursue the peace process more seriously, the option of a two-state solution must be preserved despite the fact that this option is disappearing under the never-ending expansion of Israeli settlements, checkpoints, restrictions on movement and confiscation of land. The head of the General Delegation of Palestine to Australia and New Zealand, Mr Izzat Abdul Hadi, has emphasised the need for a two-state solution.

In 2005, on the first anniversary of the ruling by the International Court of Justice that the Israeli concrete wall is illegal and should be removed, frustrated Palestinian NGOs and trade unions called for a boycott, divestment and sanctions—BDS—targeted at Israel with the stated goals that:

These non-violent punitive measures should be maintained until Israel meets its obligation to recognize the Palestinian people’s inalienable right to self-determination and fully complies with the precepts of international law by: 1. Ending its occupation and colonization of all Arab lands and dismantling the Wall; 2. Recognizing the fundamental rights of the Arab-Palestinian citizens of Israel to full equality; and 3. Respecting, protecting and promoting the rights of Palestinian refugees to return to their homes and properties as stipulated in UN resolution 194.

Boycotts have a long tradition over the centuries. The BDS movement has caught on around the world. I note Archbishop Desmond Tutu as a prominent supporter.

The reality of the BDS movement in Australia is that it has been captured by political parties whose main agenda is not the welfare of the Palestinians under occupation or for a peaceful solution in the Middle East. The Palestinian Authority has distanced itself from the civilian BDS movement except for advocating a limited boycott against companies actually operating in illegal settlements. It does not support general boycotts against Israel, because boycotts are incompatible with negotiating a two-state solution.

When the issue of Palestinian statehood rose again recently, the feedback to my office from the Arab community and all its supporters was limited but consistent: they want Australia to recognise the state of Palestine as part of the two-state solution to the conflict and they oppose the use of violence by those who have taken over the BDS movement. A boycott must be voluntary and peaceful; otherwise it is not a boycott but merely coercion. (Time expired)