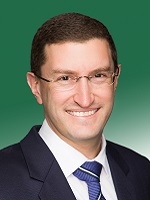 It’s time for the Albanese government to reverse their decision. If they don’t, then the next coalition government will. Australia should not be making foreign policy in such a chaotic way, particularly when that policy alienates longstanding allies like Israel.

(a) Israel, as a sovereign state, is free to decide its own capital; and

(b) for the last 3,000 years Jerusalem has not been the capital of any state other than a Jewish state, and has been the seat of government of Israel since 1950;

(2) recognises that the territory of West Jerusalem:

(a) has been part of Israel’s sovereign territory since the state was established in 1948, and is not part of the territory which Israel captured during the 1967 war;

(b) is therefore outside the scope of United Nations (UN) resolutions since 1967, which are limited expressly to territory occupied by Israel since 1967; and

(c) has never been the subject of peace negotiations between Israel and the Palestinians;

(a) Australia’s recognition of West Jerusalem as Israel’s capital in 2018 did not in any way pre-empt the outcome of peace negotiations, or undermine the prospects of achieving a peaceful settlement of the conflict based on the UN-endorsed principle of two states for two peoples; and

(b) since 2020 four Arab states have officially normalised relations with Israel, thereby disproving claims which were made in 2018 that recognition of West Jerusalem as Israel’s capital would worsen the conflict; and

(4) calls on the Government to:

(a) reverse its recent decision to no longer recognise West Jerusalem as the capital of Israel;

(b) apologise to the Australian people for the lack of consultation or opportunity for public debate in the lead-up to the decision, and for effecting an important change of government policy through an amendment to a government website, and then officially denying the change, before a decision was taken by the Cabinet;

(c) apologise to Israel for this ill-considered decision, and the hasty and careless manner in which it was made; and

(d) apologise to the Australian Jewish community for the failure to consult and for announcing its decision on the Jewish Holy Day of Simchat Torah, when Jewish community organisations were precluded from responding.

I spent the last week in Israel, the Palestinian territories and the United Arab Emirates. The original purpose of my visit was to examine how the Abraham Accords are changing the Middle East for the better. The Abraham Accords put to death two canards of this debate: first, that there can be no peace between Israel and its Arab neighbours while the Israel-Palestinian issue remains unresolved; and second, that the central problem in the Middle East is Israel-Palestine. It’s not. The real challenge in the Middle East is the export of terrorism and regional destabilisation by Iran, and the prevalence of failed states like Syria and Lebanon, which are being picked over by a range of terrorist organisations like ISIS and the Iranian-backed Hezbollah. Unfortunately, rather than celebrating the Abraham Accords, I was constantly having to confront the real sense of hurt that Israelis have about the Australian government’s decision to reverse our policy on Jerusalem. Make no mistake, this was big news in Israel and it has damaged our relationship with a significant ally and the only democracy in the Middle East. I explained this was not a bipartisan decision and that a future coalition government will revert to recognising West Jerusalem as the capital.

Labor’s decision-making was shambolic and wrong. Labor had three positions on this issue in 24 hours. There was no consultation with Israel, and the decision was announced on Simchat Torah. It is hard to think of a more chaotic piece of foreign policy-making in Australia. It was a decision that sends a bad message to all other countries with whom we have long-standing alliances and friendships. The decision was lauded by Hamas and Palestinian Islamic Jihad. You know you’re making bad decisions when they are endorsed by listed terrorist organisations like those.

West Jerusalem has been part of Israel since 1948. It looks like every other capital city in the world. The Knesset—Israel’s parliament—is there, the Supreme Court is there, the Prime Minister lives there and the President lives there. West Jerusalem is not a final status issue. I want to address the government’s three justifications for its decision. First, they say the decision to not recognise Jerusalem had been the position of every government between 1967 and 2018. The simple answer to this proposition is to say that the previous policy was wrong. It was a pointless charade and, to me as a Jewish Australian, it was an offensive form of anti-Semitism, singling Israel out by pretending its capital was somewhere other than it actually was, which was finally corrected by the Morrison government. But when the correct decision has been made by an Australian government, it is no justification for the succeeding government to revert to the previous offensive position by saying that the correct position was out of step with those governments who were in error.

Second, Labor argue that the decision was out of step with a range of countries including France, Spain, South Korea, New Zealand, Germany, Japan, the EU, Singapore, Canada, the UK, Sweden, Finland and Norway. Well, Australia has its own independent foreign policy based on facts, principles and our national interest; it is not some form of groupthink. Third, they described the Morrison government’s announcement as a political stunt. It was not a stunt; it was a policy decision made in an orthodox manner. Over two months between making the announcement that the government was considering recognising West Jerusalem as Israel’s capital and the final decision, there were consultations led by the secretaries of PM&C, DFAT and Home Affairs. Community representatives and people closely involved in the Middle East peace process were involved. Prime Minister Morrison raised the issue with other world leaders personally in bilateral meetings. Compare that process with Labor’s shambolic approach and one can only conclude that the reversal of this decision came about to appease extreme elements in the ALP.

On Israel, Labor speaks with a forked tongue. Before the election, Labor promised they were in lockstep with the coalition. The Attorney-General wrote in the Australian Jewish News:

Australia has for generations spoken with one voice in support of Israel. Labor’s own history of steadfast support for Israel extends back to well before the founding of the modern state in 1948.

The truth is that you do not have to look far to see the reality, and value, of bipartisanship when it comes to Israel.

Well, it took only a few months for Labor to demonstrate this was untrue. As Peter Wertheim from the Executive Council of Australian Jewry pointed out, the ECAJ’s pre-election survey asked:

Please outline your party’s policies on the recognition of Jerusalem as Israel’s capital, including any additional measures it would take if elected to government.

In their answer, the position Labor put to the Jewish community going into the election made no mention that it would cease to recognise West Jerusalem as the capital of Israel. As Peter Wertheim has written:

Significantly, there was no statement as previously, that Labor would reverse the Morrison government’s decision. Was this misleading? It was certainly less than full disclosure.

It’s time for the Albanese government to reverse their decision. If they don’t, then the next coalition government will. Australia should not be making foreign policy in such a chaotic way, particularly when that policy alienates longstanding allies like Israel.

The DEPUTY SPEAKER ( Mr Vasta ): Is the motion seconded?

Mr Violi: I second the motion and reserve my right to speak.