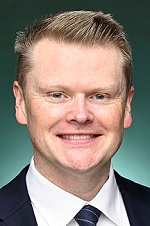 I’m not going to stand here and say, ‘I have the answers on the status of Israel’s capital,’ but I think the point that a sovereign nation can decide its capital is a seductive one. It makes sense; it just does. Was the timing of the announcement, on a by-election, a good thing? Probably not. It probably wasn’t. But that doesn’t justify this timing. That doesn’t justify another mistake, and it could have been handled better.

Mr WOLAHAN (Menzies) (16:44): Can I just begin by acknowledging the member for Macnamara. That was a very moving and heartfelt address. Before I came into this place, you and I met at an event for a Jewish school, and you said something to me that I’ve never forgotten: ‘When you come into this place, never forget what that feeling is like. You never know how long it will last. And use every day to make a contribution’. You’ve just made an excellent contribution.

I don’t claim to know this issue as well as you do, or as well as many other people do, but I often think of a perspective that I can understand a bit better. I was born in Dublin, in Ireland. When we came to Australia in 1988, I would often hear, in the following years, people give ill-informed comments on the status of Northern Ireland, about whether a unified Ireland should happen or whether it should always be part of England. Like this issue, it’s complex and it’s difficult. But, as a kid, growing up, I had the same dream, that Catholic and Protestant kids could go to school together, could work together, could marry and live. It just didn’t make any sense to me that people who looked like family were at war with each other. I never understood that.

Maybe there are some parallels here. I’ve come in as a new member, straight into opposition. I’m happy to be here, but I know that most of my colleagues would like—and I would too—to be where you are one day, and we’ve got to earn that right. When I go to schools, or speak to people in the electorate, and they ask, ‘What is it like?’ one of the things I say is that it’s been quite pleasant working with people from the other side in committees and in some of the training that we do. And, when it comes to defence and foreign affairs, I sing your praises. I’d like to think, almost all of the time, the new government has done a pretty good job on defence and foreign affairs—not perfect, and we will keep a close watch—but I think this was a mistake. It was a mistake in how it was handled.

I’m not going to stand here and say, ‘I have the answers on the status of Israel’s capital,’ but I think the point that a sovereign nation can decide its capital is a seductive one. It makes sense; it just does. Was the timing of the announcement, on a by-election, a good thing? Probably not. It probably wasn’t. But that doesn’t justify this timing. That doesn’t justify another mistake, and it could have been handled better. I had a note here about the Jewish holiday, and I saw, when someone else read it out, that you corrected them, so tell me if this is correct: Simhath Torah.

Can I say this: Australia must remain a strong supporter of a two-state solution in which Israel and a future Palestinian state can coexist. We on this side support Australia continuing to call for all parties to the conflict between the Palestinians and Israel to maintain restraint and to renounce violence. Violence never achieves anything. Labor has made a mistake here. It does need to act more professionally on major foreign policy decisions.

I watched when the criticism came thick and fast about our relationship with France, in relation to AUKUS. That was unfair. With a decision as tightly held as that, of course there was no other way to do it than the way that it occurred. But there was no allowance for that in most of the commentary that I saw from the other side. If you are sitting over here one day and we’re there, if we are doing a good job on defence and foreign affairs, feel free to say so. You’re welcome to do it. As long as I am in this place, I won’t criticise you for putting the national interest first, because that’s why I am here.

But this decision has not come without a cost. It’s not a domestic political cost that we’re seeking to get an advantage from; it’s a cost to the nation. Let’s look at the response from the Israeli Prime Minister:

In light of the way this decision was made … as a hasty response to an incorrect report in the media, we can only hope that the Australian government manages other matters more seriously and professionally

Then Australia’s Ambassador to Israel was summoned by the Israeli foreign minister, who registered his deep disappointment in the face of the Australian government’s decision resulting from short-sighted political considerations. We could have handled the announcement better, but so could you.