Mark Coulton MP – spoke about his recent trip to Palestine 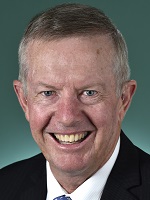 In recent times, I have been made aware of the struggle of the Palestinian people and the effect that 50 years of occupation, since the 1967 war, has had on the Palestinian people….There are two United Nations resolutions that have been passed, criticising and condemning these illegal settlements and demanding that they be removed, which have just been ignored.

Mr COULTON (Parkes—Deputy Speaker) (18:40): I’d like to speak about my recent experiences in Palestine. I will say from the outset that I have always been a strong fan and very impressed with the story of Israel, from what I’ve seen, and the struggle that the Jewish people had to find a home and start the state in Israel. In recent times, I have been made aware of the struggle of the Palestinian people and the effect that 50 years of occupation, since the 1967 war, has had on the Palestinian people.

Recently, in April, I was privileged to lead an unofficial delegation from this parliament to Palestine. It was a bipartisan delegation, and it included my good friend and colleague here the member for Flynn, Mr O’Dowd. Spending eight days in Palestine—staying in Ramallah and living with the Palestinian people with none of the special privileges of being part of an official delegation—gave me a small insight into the daily struggles of the Palestinian people. The reason I’m speaking here tonight is that I am concerned that the Palestinian issue might become a political one in this country. The Greens have a strong position on that. I know the Labor Party is struggling at the moment with a position on Palestine, with strong views on either side. As a member of the National Party, with my colleague here, the member for Flynn, I don’t believe the people of Palestine will be served if this becomes a party political issue in Australia.

I have heard speeches here in support of Israel, but I think it’s important to note that until you actually go and live and stay with these people and understand the deprivation of liberty that goes with being a Palestinian on the West Bank, it’s very hard to comprehend. On a daily basis we not only witnessed but experienced the indignity of going through checkpoints at random at gunpoint. We witnessed people being held up from going to work and from going about their daily activities. We witnessed farmers who didn’t have access to some of their fields because there happened to have been a 700-kilometre dividing wall between their home and their farm. On some days the access was only for a very short period of time, morning and night, and for days at a time, because of various reasons, the access was denied completely. As someone with a farming background, I understand the frustrations and the difficulties a farmer would have in not having control of and access to your lands in a timely manner.

Not only that but we also witnessed the effect of 600,000 illegal settlers living on Palestinian land. There was the demolition of Palestinian houses to allow these settlements to go through. There are roads connecting these settlements back to Israel that can only be driven on by Israeli citizens. There is the indignity of going on a journey that would take 20 minutes by a direct route but having to take two hours because the Palestinian hosts that we had did not have access to those roads that were only for the Jewish settlers.

This is not an anti-Israel speech. I’m reflecting on what I have witnessed and my concern for the future of this area. I believe it’s in the interest of the Israeli people to have a resolution for this. We’ve seen, in other parts of the world where an entire section of the society is repressed and has no hope for the future, how that can lead to a disaster. This is not something that is just coming from me and a few supporters of Palestine in this country. There are two United Nations resolutions that have been passed, criticising and condemning these illegal settlements and demanding that they be removed, which have just been ignored.

This morning, as a matter of fact, I saw on social media a YouTube clip with the Prime Minister of Israel, Mr Netanyahu, asking the rhetorical question: ‘Why are Palestinian children taught to hate?’ And that’s probably something that I think we saw on both sides: that the level of distrust and hatred on both sides, if a resolution cannot be reached soon, will nearly be irrevocable.

The figures are that, in that area, basically 50 per cent of the population are Israelis and 50 per cent are Palestinians. Australia supports a two-state solution and, indeed, from our conversations with the Palestinian Authority, that is what they’re aiming for. I personally am wondering how a two-state solution will possibly work. There is the incursion of the Israeli settlements into those areas, but not only that. In certain areas of the West Bank that are categorised as area C, which is a sort of joint ownership, all the prime farming land and indeed all the water supply is controlled by Israel. We saw the Palestinian farmers removed to the inferior countryside and being starved economically because of that dislocation from their area. We saw in the city of Hebron that settlers have just taken over the centre of the town and now, with the support of the Israeli army, at gunpoint have taken over several city blocks in that area.

So what we have at the moment is basically one state. The West Bank and Israel have all been run by Israel, with an apartheid rule. We’ve seen the outrage of the world, and we saw the downfall of that system in South Africa. We need to make sure that that’s not repeated in this area.

One of the most chilling conversations that I had was with a member of the Palestinian Authority. He said something that I’d actually been thinking, and that is: the young people who have been removed from opportunity, some of them quite well educated, would be vulnerable for radicalisation from outside forces. If that happens, if the Palestinian youth graduate from throwing rocks at the Israeli army and end up being armed and trained by some terrorist force, we are going to see a level of destruction that we could possibly not tolerate.

So my request is that Australia lends its strong support to a resolution of the issue with the occupation of Palestine and the West Bank. I know this is not a simple issue. I know it’s in the interests of Israel to have a resolution to this. I can’t imagine that Israel would want to be ruling that area from the point of a gun for another 50 years. If that happens, I shudder to think what the outcome of that will be. There are many Palestinians who have migrated to Australia. I have some in my electorate. They have great connections back to that area. My strong wish is that as a country, in a bipartisan way, we can put pressure on Israel and we can lend support to the peace process so that we can avert what inevitably will be a large amount of bloodshed if nothing happens.