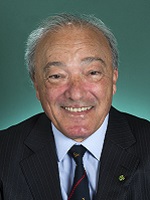 This is a significant milestone worth celebrating, as are a number of longstanding ties that we hold as a nation within the global community. Australia has an important economic bond with the State of Israel, and it’s my sincere hope that our relationship will continue to prosper over the years to come.

Dr FREELANDER (Macarthur) (12:06): I rise today, as my colleagues before me on both sides of the House have, to speak on this motion to commemorate the 70th anniversary of the Israeli-Australian diplomatic relationship. I do so as a proud member of the Australian Jewish community and with the full gravity of the significance of being one of the limited number of Jewish-identifying members of this parliament. This is a significant milestone worth celebrating, as are a number of longstanding ties that we hold as a nation within the global community. Australia has an important economic bond with the State of Israel, and it’s my sincere hope that our relationship will continue to prosper over the years to come. But I do think it’s very important to remember the history of our relationship and how the State of Israel arose.

As members of this place would be aware, our relationship with Israel dates back to 1947, an important period in history for not only both of our young nations but the entire world. The relationship was fostered under our 16th Prime Minister, Ben Chifley, and his Minister for External Affairs, HV Evatt, who ultimately officially recognised Israel in 1949. Both of our nations were navigating the challenging waters in the immediate post World War II era, and in trying times such as those the significance of establishing diplomatic relations with another nation cannot be understated.

It’s also important to understand the trauma that the world was recovering from at that time. I have recently been to Germany to visit my daughter and my new grandchild. I visited the House of Terror Museum in Berlin, which describes, documents and informs about the Holocaust and the terrible, terrible things that happened at that time, and you cannot fail to understand what a symbol the State of Israel was and is for the Jewish people. As one of the few Jewish people in Australia who has never been to Israel, I still see it as a place of sanctuary which the Jewish people found after the terrible trauma of the Second World War. One needs to understand that history when understanding how important it was for Australia to recognise Israel.

My own electorate of Macarthur’s links to Palestine and to Israel go back even further. Every year, we have a commemoration of the Battle of Beersheba, the last great cavalry charge of wartime, when the Australian Light Horse charged the Turkish and German forces at Beersheba and overcame them, which led to the rapid advancement of the Allied forces in the First World War. On 31 October every year, at Menangle Park, we have a celebration of the 4th Australian Light Horse, who trained and camped at Menangle prior to embarking for the Middle East where they undertook that great feat. My father-in-law was one of the last of the Light Horsemen who were dismounted in the Second World War to fight in New Guinea. So our electorate of Macarthur has a strong link with the Middle East and with Palestine.

A number of noteworthy Australians have contributed to and fostered the relationship between our two nations. Perhaps the most significant of these was none other than General Sir John Monash, a famous Jewish Australian renowned throughout the country. Our diplomatic relationship, as with all other nations with which we hold bilateral relations, will overcome adversity through time, surpass governments which come and go and, I hope, stand the test of time. In the modern, globalised world, our relations with our neighbours bring us together as one and help to break down barriers of language, distance and culture. The role of trade and diplomatic relations cannot be underestimated in negating global conflicts and bringing us closer together. It is of vital importance that we continue to foster economic ties with Israel, which is a rapidly developing country with wonderful new start-ups occurring almost every minute. We are as strong as we are united and as weak as we are divided, and we are united with Israel.

Macarthur has a limited number of Jewish Australians residing within its boundaries. However, no doubt Australians from all backgrounds can revel in the success of such a longstanding relationship. Both our nations have experienced a great deal of growth and change throughout our 70-year friendship. As the Leader of the Opposition stated, this anniversary serves as ‘a reminder of Australia’s capacity to be a constructive, effective international citizen’ and it should encourage us all to continue to seek to break down the perceived barriers that have historically divided us.

The geopolitical climate in the Middle East is a difficult one, and division and war still continue to plague the region. However, a democratic society such as Israel should serve as a beacon of hope in this difficult climate, and no doubt it offers hope to the people of other nations who still fight a constant battle for freedom from oppression and tyranny. The people of Israel should be supported by diplomatic friends. The right to prosper safely and freely within their borders should be defended at all times. That much is undeniable.

As an ally of the State of Israel, Australia should continue to speak openly and frankly with our close friend. I have no issue in saying I am a strong supporter of a two-state solution. I believe in a two-state solution. I have hope that peace can be found in this region and that the people of Palestine and Israel can, with willingness from both sides, coexist and live harmoniously. As with all borders and barriers, the things that unite us as human beings far surpass the things that divide us. We just have to want to see an end to conflict and be willing to live in harmony. I’ve said that the people of Israel should be able to live safely and securely within their nation, and I’ll say the same thing for the Palestinian people. Certainly there are barriers to overcome, and no-one should deny the complexity of this situation, but that does not make the goal unobtainable. We have to believe that these obstacles can be overcome and tirelessly pursue a two-state solution, if we truly desire bringing stability to the Middle East.

Our actions and decisions as a nation matter, if we are to help our allies bring peace to this difficult region. The impact of world leaders making sweeping statements on the location of diplomatic postings should not be underestimated, especially if these statements are empty and made with the goal of swinging a few votes in a marginal seat. Our words and our decisions do matter. Australia’s role as a global citizen, as with all nations, should not be placed at risk as a result of ill-conceived actions or notions put forth by an individual without appropriate research and understanding. Our relationship with our allies should outlast governments, which come and go. Our world leaders must act as responsible custodians of the offices they hold, to ensure that these relationships continue to thrive in the future.