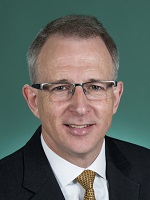 The decision that the current government made recently was badly executed. It was fundamentally wrong. The coalition has no hesitation in calling on the government to reverse it.

Mr FLETCHER (Bradfield—Manager of Opposition Business) (12:20): I am very pleased to rise to strongly support this motion calling on the government to reverse its recent decision to no longer recognise West Jerusalem as the capital of Israel and to apologise to the Australian people, to Israel and to the Australian Jewish community. This motion is necessary because of a shockingly poorly executed and fundamentally ill judged decision by the government. On 17 October, media reported that the Department of Foreign Affairs website had removed references to the recognition of West Jerusalem as Israel’s capital and the commitment to move the embassy. A spokesman for Foreign Minister Penny Wong was asked for clarification and had this to say:

The former Government made the decision to recognise West Jerusalem as the capital of Israel. No decision to change that has been made by the current government.

The very next day, the foreign minister announced at a press conference that Australia would reverse the recognition of West Jerusalem as the capital of Israel.

Extraordinarily and insultingly, the announcement occurred on the Jewish holy day of Simhath Torah and just two weeks before an election in Israel. The Minister for Foreign Affairs did not demonstrate how this abrupt reversal of position was in the national interest, and, indeed, what was particularly troubling about this decision was that it treated so many stakeholders with contempt. The Israeli ambassador was not informed of the decision before the announcement; the Israeli government was not informed. Israel’s Prime Minister Lapid had this to say:

In light of the way in which this decision was made in Australia, as a hasty response to an incorrect report in the media, we can only hope that the Australian government manages other matters more seriously and professionally.

The Israeli government summonsed Australia’s ambassador to Israel to explain the government’s change in policy.

The Executive Council of Australia Jewry said the decision was made in ‘a shoddy manner’, was ‘poor policy’ and was ‘no way to treat an ally’. It’s interesting to note that members of the government themselves expressed disappointment, as did a former Labor member of this place, Michael Danby, who said the government’s decision was ‘chaotic’ and ‘unprofessional’. Of course, this decision was welcomed by some—by two listed terrorist organisations: Hamas and the Palestinian Islamic Jihad. The Albanese Labor government has chosen to give comfort to those organisations at the same time as treating longstanding friends of Australia very poorly.

During the last election campaign, there was no mention by Labor of its plan to reverse this policy. On the contrary, elected senior Labor parliamentarians assured concerned stakeholders that, on the question of Israel, it didn’t matter which way they voted. The now Attorney-General wrote in the Australian Jewish News, claiming that across domestic politics Australia ‘spoke with one voice’, and the member for Macnamara made similar claims on 18 March in the Australian Jewish News, saying that Australia’s Jewish community should feel proud that its interests would be safeguarded ‘irrespective of whoever forms government’. I have seen no apology from either the Attorney-General or the member for Macnamara for their involvement in this shameful misleading of a significant and respected community—the Australian Jewish community.

I contrast this very poor process with the careful process our former government followed in 2018. Then Prime Minister Morrison announced in December 2018 the decision that the Australian government would recognise West Jerusalem, the seat of the Knesset and many of the institutions of the government of Israel, as the capital of Israel, a decision which, of course, respected both a commitment to a two-state solution and longstanding respect for relevant United Nations Security Council resolutions. The then government committed to moving the Australian embassy to West Jerusalem when practical, in support of and after the final status determination of a two-state solution.

In making this decision, Australia acknowledged the aspirations of the Palestinian people for a future state with its capital in East Jerusalem, and the announcement was made following a detailed review and extensive consultation by the secretaries of the departments of the Prime Minister and Cabinet, Foreign Affairs and Trade, Defence, and Home Affairs. The decision that the current government made recently was badly executed. It was fundamentally wrong. The coalition has no hesitation in calling on the government to reverse it.