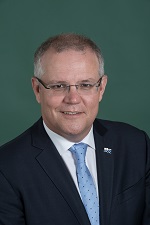 Australia has been a steadfast and loyal friend to Israel since its very creation, and I can assure this House, the people of Australia and our friends in Israel that the Liberal and National parties will never walk back or shrink from the recognition that Australia now affords Israel and the commitments and support for the State of Israel, whether in the General Assembly of the United Nations or elsewhere.

Mr MORRISON (Cook—Prime Minister) (12:01): On indulgence, I rise to acknowledge the 70th anniversary of Australia’s formal diplomatic relationship with the State of Israel and affirm our deep friendship with the people of Israel—and, in doing that, I welcome the ambassador here with us in the chamber today.

Mr MORRISON: In any long friendship there are moments that matter and moments never forgotten. For Australia and Israel it was in 1947 and it was in the United Nations. There was at that point no nation of Israel. Instead, there were broken and scarred Jewish people scattered around the world in places like Auschwitz-Birkenau, Dachau and Buchenwald. Though they no longer existed as state-sponsored machines of death, they seemed more real than a permanent home for the Jewish people at that time. It was as if darkness and hopelessness had covered the Jewish people as the true extent of the Holocaust became known. Maybe it was for such times that the Book of Joel spoke of young men seeing visions and old men dreaming dreams—and the age-old dream, in the words of David Ben-Gurion, was ‘the redemption of Israel’.

It was in this setting that Australia chaired the 1947 UN committee that voted in favour of dividing the territory of mandate Palestine. On 29 November 1947 at the United Nations General Assembly, Australia joined 32 other nations in successfully voting for the partition plan. Looking back across seven decades it might seem that that was a simple thing to do and an obvious choice to make, but it was neither of those things. Australia made, in the words of Doc Evatt, who was instrumental in this recognition, ‘an inevitable and just choice to stand with the Jewish people of the world and their vision for a Jewish state and a place of sanctuary where they would never again, and should never again, face persecution’.

Australia extended official recognition to the State of Israel in January 1949. In May of that same year Australia was proud to preside over the vote which formally admitted Israel as a member of the United Nations. As that new nation formed, the Jewish people arrived, in the words of David Ben-Gurion, ‘with the dew of dreams still moist in our hearts’. Our small part, Australia’s part, is a legacy of which we are proud and one we hold dear today as we mark this anniversary. In the words of our then Prime Minister: ‘The new nation of Israel will be a force of special value in the world community, and its recognition was fair and just’—and so it has proved to be.

Today Israel’s light is now a beacon of democracy in the Middle East. Ours is a 70-year-long friendship between two peoples which share a commitment to democracy and the rule of law, have a multicultural character and are committed to science and research, to a free press, to prosperity for our people and to innovation to overcome the challenges of our often hostile natural environments.

My government has resolved to ensure our commitment to Israel remains as firm today and in the future as it indeed was 70 years ago for Australia. That is why our government has acted for Australia to now recognise West Jerusalem, the seat of the Knesset and many institutions of government, as the capital of the State of Israel. We look forward moving our embassy to West Jerusalem when practical in support of and after the final status determination of a two-state solution. And, in the spirit of a two-state solution, we acknowledge the aspirations of the Palestinian people for a future state with its capital in East Jerusalem.

My government is also currently establishing a trade and defence office in West Jerusalem to enhance and support our deepening collaboration on trade, defence industries, investment and innovation. Just as it was 70 years ago, it remains in our national interests to see Israel continue to flourish as a liberal, participatory democracy in the Middle East. And, now as then, Australia continues to strongly support Israel’s right to exist within secure and internationally recognised borders.

But my government won’t just proclaim these words and sentiments; we will continue to act on them and not step back from or shrink from our commitments. This includes standing by Israel in the face of biased and unfair targeting of Israel in the UN General Assembly. The UN General Assembly is now the place where Israel is bullied and where anti-Semitism is cloaked in the language of human rights. Think about it: a nation of immigrants, with a free press and parliamentary democracy, which is financially prosperous, the source of innovation in the world and a refuge from persecution and genocide, is somehow now the centre of cruelty in the world, according to some in the UN. That is intellectual fraud. Last year, there were 17 UN General Assembly resolutions critical of Israel. This compared with a total of five covering all other countries, including Myanmar, the Syrian Arab Republic, Russia’s actions in Crimea and the Ukraine, Iran and North Korea. This year the Human Rights Council passed six motions condemning Israel compared to a total of 14 across the rest of the world.

Last year, at my direction, Australia opposed six resolutions that attacked Israel in the UN General Assembly. These included the Jerusalem resolution, which contains biased and one-sided language attacking Israel and denies its historical connection to the city, and the Peaceful Settlement of the Question of Palestine resolution, which confers on the Palestinian Authority a status it does not have. In the past, we’d abstained on these resolutions—not anymore and not on my watch.

My government will not turn a blind eye to an anti-Semitic agenda masquerading as defence of human rights in the UN. This is also extended to calling out those who would seek to wipe Israel from the map. Again at my direction, last year, Australia supported a UN General Assembly resolution to condemn the egregious and ongoing violent acts of the terrorist organisation Hamas. Hamas are violent extremists, terrorists who use the Israel-Palestine conflict as an excuse to inflict terror. They should have no friends at the UN. The failure of that resolution to pass with the requisite majority was an indictment, I think, of the UN. Australia condemns Hamas’s activities in the strongest possible terms.

Of course, our partnership has always been underpinned by the peoples of our nations. Australia’s Jewish community began with those who arrived on the First Fleet. Though they were persecuted in Europe, Africa and the Middle East, Australia has been, to quote the words of the member for Berowra, a land, ‘almost uniquely in human history, good to the Jewish people’. Though numbering about one-hundredth of our population, Australians of Jewish heritage have made a remarkable contribution to our national life and our story. We are the nation of John Monash, Isaac Isaacs, Sir Zelman Cowen, Governor Linda Dessau, Frank Lowy, Harry Triguboff, Joan Rosanove and thousands more who, in their own way, have all sought to be the light unto the nations, performing the mitzvot, or good deeds, according to the law of Moses.

Australia has been a steadfast and loyal friend to Israel since its very creation, and I can assure this House, the people of Australia and our friends in Israel that the Liberal and National parties will never walk back or shrink from the recognition that Australia now affords Israel and the commitments and support for the State of Israel, whether in the General Assembly of the United Nations or elsewhere.

We know this is about Israel. They are a steadfast and loyal friend. Seventy years on, this parliament restates our commitment to Israel, to its people and to the deep friendship between our nations. We are friends who have always stood with each other, and may that always be the case.