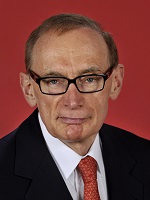 Senator JOYCE (Queensland—Leader of The Nationals in the Senate) (14:15): My question is to the Minister for Foreign Affairs, Senator Carr. I remind the minister that Australia has had a policy since 1948 through the governments of Chifley, Menzies, Holt, McEwen, Gorton, McMahon, Whitlam, Fraser, Hawke, Keating and Rudd to support the secure borders of an Israeli state.

Senator JOYCE: Do you categorically and unambiguously support the—

The PRESIDENT: Order on my right! Just wait, Senator Joyce. When there is silence, we will proceed. Senator Joyce, continue.

Senator JOYCE: Do you, Minister, categorically and unambiguously support the secure borders of Israel?

Moreover, I suspect, unlike the senator who asked me the question, I have argued this case with advocates of the Palestinian cause. I have said to them that Israel can never be bombed towards a two-party state. Unlike you—you would not have engaged in this sort of debate—I have debated this issue for decades, Senator. I have said to Palestinian delegations: you will not achieve peace or advance peace by firing missiles onto Israel. I have said that, until there is an unequivocal commitment to Israel within secure boundaries, the preconditions for a peace between the parties in the Middle East is not met. I do not say that when I am speaking only in the Senate, only in the Australian parliament. I have said it elsewhere. I have said it when I have been honoured to confer a peace prize on Hannan Ashrawi, an honourable spokesperson for the Palestinian cause. I said in that speech in the New South Wales parliament: Israel will not be bombed towards peace negotiations—as simple as that. I have said it when I have met a Palestinian delegation that came to see me after the Parramatta Community Cabinet meeting. I said to these young students—two very bright young girls—we believe in a Palestinian state, but Palestinians will only advance that goal by giving Israel the security guarantees it legitimately wants. I said that is the Australian position. We will not retreat from that position. I said to a group of Palestinians on another occasion, when I was Premier of New South Wales, that Israel responded by building a security barrier because bombs were going off in bus depots and cafeterias. Any government, I said, would do the same.

Senator JOYCE (Queensland—Leader of The Nationals in the Senate) (14:18): Mr President, I ask a supplementary question. Minister, you might state that Israel will not be held to ransom, but the Prime Minister certainly was by Senator Cameron. If it remains the government’s policy to support secure borders of Israel, why is the Australian government not voting against the United Nations granting Palestine observer status when its territory is currently controlled by groups that have at times denied Israel’s right to exist and have allowed the firing of over 2,200 rockets into Israel over the past year?

Senator BOB CARR (New South Wales—Minister for Foreign Affairs) (14:18): I would like to help the honourable senator find his way through these issues. I suspect that, given the expertise on this matter that resides in the Senate chamber on both sides of the house, you have probably been left behind by a debate far more intense and far more sophisticated than your comments suggest. The fact is that this motion does not confer statehood on the Palestinian territories; it does not do that. It gives a non-state status to the Palestinian delegation, which is somewhat higher than what it enjoys at the present time—a non-state status. When the vote takes place later this week, you will see that conservative governments from around the world will cast either a yes vote or an abstention. You will find that to be the case. To accuse them, to accuse the British government— (Time expired)

Senator JOYCE (Queensland—Leader of The Nationals in the Senate) (14:20): Mr President, I ask a further supplementary question. A non-state status—that is oxymoronic. I refer the minister to comments made by the head of the Palestinian National Authority, Mahmoud Abbas.

The PRESIDENT: Order! Senator Joyce, resume your seat. When there is silence we will proceed. Order on my right!

Senator JOYCE: I refer the minister to the comments made by the head of the Palestinian National Authority, Mahmoud Abbas, who in 2010 stated: ‘I turned to the Arab states and I said, “If you want war, and if all of you will fight Israel, we are in favour.”‘ What reassurances has the government received from the Palestinian Authority that there is no longer favour of a pan-Arab invasion of Israel and that it recognises Israel’s right to exist?

The PRESIDENT: Order! That was a very long question. It would assist when people are asking questions if they did not preface them with a comment or a remark so that they may well fit the question into the allotted time.

He is bewildered by the notion of observer status. The resolution before the Senate would lift the status of the Palestinian delegation from ‘other entity’ to ‘observer status’.

Senator Joyce: Mr President, I have a point of order on relevance. The question asked, ‘Do you concur with the views of Mahmoud Abbas that they destroy the State of Israel?’

The PRESIDENT: Order! There is no point of order. The minister has 17 seconds remaining.

Senator BOB CARR: What does the senator want? The fact is that this government’s position—restated last week, restated at every opportunity since 2007 and restated by the Prime Minister in question time in another place—has been that it remains a supporter of a two-state solution with a secure Israel— (Time expired)