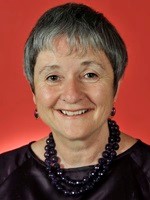 There has been great international outcry. The session of the UN Committee on the Elimination of Racial Discrimination in 2012 concluded that Israel’s policies in the Occupied Palestinian Territory—they used this term, which makes me feel chilled to the bone—are tantamount to apartheid. Additionally, this committee determined that many state policies within Israel also violate the convention on human rights.

Senator MOORE (Queensland) (14:54): Two weeks ago in my office I was visited by Khalil Hamdan, an Australian citizen and a good friend of our community over many years. He is originally from Palestine and is now living in Brisbane after many years of living in exile from his home country. Khalil and two of his supporters who work very closely looking at the issues around Palestinian-Israeli relationships came to see me because they were particularly concerned about Khalil’s brother-in-law Ridha Khalid, who was taken from his home and arrested, in front of his wife and two children, in May this year by soldiers from the Israeli army. His wife, Weam, is the sister of Khalil Hamdan. She contacted her brother in great distress. Mr Khalid’s sister described the arrest of her husband. She said:

25-30 Israeli soldiers, young men and women, broke into their small two bedroom unit at 3 am in the Camp No.1 refugee camp in Nablus, Palestine. They smashed down the door and took Ridha away for no reason and we don’t know why he was taken from us. After they took him away they asked Weam to get out of the unit with her two small children and then these young people in Israeli army uniforms proceeded to destroy everything in their small home—furniture, electrical appliances, including the children’s computer and all the kids’ school books.

I cannot even imagine what that would mean to young children, watching this happen to their home, even young children who have grown up in a refugee camp in the occupied areas of Palestine. The kids were waiting and wondering what was happening around them.

Not content with the destruction of those physical things, it is alleged that the soldiers then took all the food from the refrigerator and cupboards and spread it around the floors and the walls. They removed pictures from the wall and smashed them.

This happened in front of young people and the neighbours knew that something had gone wrong. This woman, with her two children, had nowhere to turn. The next day she was able to contact her brother in Australia and talk to him and say, ‘We need help. We don’t know what has happened to our father.’

Under the current system in Palestine, the administrative detention process, people can be taken from their homes without formal arrest and imprisoned. Lawyers can then apply to a military occupation court for the release of the person who has been removed only after that person has been formally indicted on some charge and then served a period set by the court. Lawyers can visit but they cannot represent or counsel prisoners who are being held without charge. The important thing about this visit I had from my constituent is that Ridha has not been charged. He has just been taken away under charge by soldiers.

It is not the first time that Ridha has been arrested. This is causing particular concern to his family and friends because, the last time he was arrested, he was held for quite a long time. He was treated badly, according to statements that he has made internationally about what occurred, and only then released because of public outrage and also by work undertaken by an Israeli Women’s Peace Group. They are a wonderful group of women who have been working for many years to establish peace so there can be a change in this part of the world.

Also at that time, Australian family and friends got involved in a public campaign to ensure that this man could be released. That happened before. So naturally the concern is great amongst the family and friends to see what will now happen to him.

We need to ensure that there is clear understanding about what people’s rights are in this area. Nobody knows for sure what is happening to the people in this area, but the international community knows that what is going on there is wrong.

There has been great international outcry. The session of the UN Committee on the Elimination of Racial Discrimination in 2012 concluded that Israel’s policies in the Occupied Palestinian Territory—they used this term, which makes me feel chilled to the bone—are tantamount to apartheid. Additionally, this committee determined that many state policies within Israel also violate the convention on human rights.

I think that is why I am most particularly keen this afternoon to talk about the impact on Ridha Khalid, who is a worker, working for the United Nations. He has held down this job for many years. He works within his community and is seen as a community builder. So the impact on the neighbours and the community of seeing this man being taken, without being charged, from his home in the middle of the night is much worse. It gives the message to the people in this area, people living under occupation and in refugee circumstances, that no-one is safe. This is so important to understand. We can have international law, we can have international discussion, but we do not seem to be able to protect the rights of individuals. The only way there seems to be any movement is if there is international outcry. As we saw with the previous arrest of Ridha, it was actually the process around international action that got him released.

Recently we have seen the case of the young soccer player, Mahmoud Sarsak, which again attracted international reaction. He was also taken into custody by the Israeli government and held for a long period without trial. He was taken in July 2009 and was only released recently. There was an international campaign to personalise the process, to tell Mahmoud Sarsak’s story and to explain what he had done in his community, his immense talent as a soccer player and also the impact that sport could have in rebuilding Palestine. It was by telling that personal story that the issues of justice could be brought both into the international area and into individual discussion.

In the coverage of the release of Mr Sarsak last month, the New York Post, which has been covering the cases for a long time, made direct comparison with the case of Palestinian activists such as Mahmoud Sarsak and the outrage in the explanation around the release from China of political activist Chen Guangcheng, who was released from Chinese arrest on 19 May. The New York Post commented on Chen’s detention and said:

The 40-year-old, blind activist said that his lengthy detention—

demonstrates that lawlessness is still the norm in China.

Those same words, replacing the issue in China with the issues in Palestine, could be put out into the international agenda.

Terrorism, occupation, fear and unfair arrest are not peculiar to one area. We need to ensure that human rights are protected across the board and not brought down in a kind of selective way, that human rights in one area are not more important than in others. We continue to ask questions about Ridha Khalid; we have gone through our government and also the UN. We are still awaiting information from the Israeli government. But this kind of action cannot be considered right in any case. We bring the case to attention. Maybe we can get some international action around Ridha and around all the other people who are held in detention in Israeli prisons.

Before I finish I would like to congratulate the Deputy Clerk on his service to the Senate and to acknowledge 20 years of service to, I believe, over 195 senators since he started in this place. Thank you.

The PRESIDENT: I endorse those comments and I call on Senator Boswell.