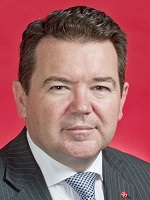 No Australian should be unconcerned by a situation where new generations of Palestinians are having their minds poisoned through disgusting anti-Semitic propaganda campaigns that only serve to make the already difficult goal of peace even more difficult—more difficult for this generation; more difficult for future generations… This is why I am particularly proud and honoured to be a patron of the Friends of Israel in my home state of Western Australia.

Senator SMITH (Western Australia—Deputy Government Whip in the Senate) (13:16): I am grateful for the opportunity today to make a contribution on a subject that is important to me but I think also important to the friends of freedom and democracy in this Senate chamber, in our country and around the world. That, of course, is the issue of safety and security for the state of Israel.

As a patron of the Friends of Israel in Western Australia, it was my distinct pleasure recently to host a small gathering which included a fascinating presentation by Mr Simon Henderson, who is a Baker fellow at the Washington Institute. Simon Henderson is considered one of the world’s foremost experts on Middle East issues, particularly on the conservative states of the Persian Gulf and on energy matters. He has garnered significant on-the-ground experience dealing with those matters, not just in his present post but also as a journalist with the Financial Times and the BBC in London.

Simon’s presentation to those of us fortunate enough to meet him during his recent visit to Western Australia focused on Israel’s relationship with the Sunni Arab world. The insights he shared were fascinating, because I think for most Australians, to the extent that we pay attention to the Middle East as a region, that term has become a byword for the Israeli-Palestinian question. But as Simon’s presentation showed, there are many, many moving parts to this sensitive global issue, and those moving parts are changing the nature of the region and will have a significant impact on the Israeli-Palestinian question over time.

Of particular note in this regard is the noticeable thawing that is taking place in connection with Israel’s relations with Saudi Arabia. There is now considerable evidence that those two nations are taking positive steps towards friendlier relations in politics, economics and security. Recent developments have included a Saudi delegation that visited Israel in July this year to explore matters of mutual interest, and very high-level discussions between members of the Saudi royal family and officials close to Israel’s Prime Minister, Benjamin Netanyahu. This is particularly driven by commercial considerations, to be sure. But, equally, the changing nature of the relationship is being driven by security considerations, in particular in relation to Iran, and a shared concern—unfortunate as it is—that the United States may not be able to be relied upon to act in the region as it has done so competently in the past. These are early steps, and they are very tentative, but we must be realistic about the capacity for change after so many decades of open hostility. But, as we consider our own attitudes to the Middle East, they are developments we should keep in mind.

When we are in the midst of continuing debates about freedom of speech and participatory democracy here in our own country, where I think we can sometimes be a little too blase about these things and take them too easily for granted, it is important to hear about those parts of the world where those rights and freedoms are perhaps a little more fragile. The links between Australia and Israel are fundamental and enduring. All Australians need to recognise and understand that, despite our geographical distance from these places and these events, what is occurring in the Middle East is very, very relevant to our own experience, especially in a world that is increasingly connected and which faces new and complex security challenges.

It is very tempting to think of these things as being a long way removed from us in our comfortable Australia. But that distance exists only in a geographical sense; it does not necessarily apply in a cultural sense. Those values for which Israel stands—personal freedoms and democracy above all else—are also the values for which Australia stands and which Australians have fought and died to protect for generations. If we want to preserve the values that underpin our open, democratic societies, we will have to work resolutely with each other to defend and protect the freedoms we hold dear. And we need to understand the threat that exists to those values not only in our own region within the world but also in a global sense. That is why the continuing attacks we see on Israel and on Israeli citizens on an all-too-regular basis are unacceptable.

Even more unacceptable are the continuing attitudes that exist in some quarters that seek to glorify such hostility and attacks. We have seen it again in just the past couple of days, with the Fatah organisation, headed by Mahmoud Abbas, using its Facebook page to celebrate—using social media to celebrate—the anniversary of the terrorist attack on the 1972 Munich Olympics, when terrorists took Israeli hostages and demanded the release of 236 prisoners from Israeli prisons. In the end, 11 Israeli athletes were murdered by the terrorists. This week, using the anniversary of those killings, Fatah called these events a ‘heroic operation’ and sought to glorify the event by publishing photos of the terrorists carrying out the attacks and praising ‘the courage of the Palestinian resistance fighter’, whilst leaving the Israeli victims unnamed. This sort of thing, sadly, is not atypical. No Australian could possibly hold sympathy with, or defend, the outrageous behaviour of some Palestinian clerics who actively encourage their followers to murder Jews at random on the streets of Afula, Tel Aviv and Jerusalem. No Australian could possibly support the words of Palestinian President Abbas—a self-proclaimed moderate, we are told—who has told his people, ‘Every drop of blood spilled in Jerusalem is pure,’ and said that murderers will be ‘rewarded by God’. These are not the words of a moderate, I would argue. No Australian should be unconcerned by a situation where new generations of Palestinians are having their minds poisoned through disgusting anti-Semitic propaganda campaigns that only serve to make the already difficult goal of peace even more difficult—more difficult for this generation; more difficult for future generations.

This is why I am particularly proud and honoured to be a patron of the Friends of Israel in my home state of Western Australia. It is why I was pleased to attend the organisation’s recent annual general meeting, at which the long-serving chairperson, Bob Kucera, handed over after six years in the role. Bob Kucera, for those who do not know, was a state Labor minister in a former state Labor government in Western Australia and was a very distinguished policeman in the Western Australian police force before entering politics.

Israel celebrates life and fiercely protects those basic human rights that are now reviled and used as a weapon against some of the most vulnerable nations in their region, and now across the world. That is why as Australians we must support the only nation in their region that stands as a bastion against the assaults on our values, our freedoms and the democratic principles that serve us all so well.

I think it is worth acknowledging some of those who work as part of the Friends of Israel WA committee because their contributions have been crucial in getting this message out to Western Australians. In his last address as the chairman—remembering, of course, that he had been the founding chairman and chairman for six years before giving up the role recently—Bob went on to say:

It is always dangerous to acknowledge individuals because often you leave out someone that has contributed so much, but can I thank all of my outgoing committee members and committee friends—Deputy Chair Graham Lienert, Steve Lieblich, the irrepressible JJ Jermalinski, our wonderful newsletter and web editor, Judith Lewis, Lauren Cayoun, Melanie Jones, membership officer and pamphleteer extraordinaire, Joanna Fox, Feamma Brass, Paul Mortley and many others—

who support the cause of Israel in Western Australia. He goes on to say a very special thanks to the committee’s treasurer, Ian Klevanski, and his lovely wife, Illana, who ensure the viability of such an important organisation. He went on to thank Ruth Marion from Bridges for Peace, whose ‘boundless enthusiasm is infectious’ and who ‘epitomises the Christian support’ that Israel continues to enjoy.

May I congratulate Bob Kucera and all of the Friends of Israel committee for the outstanding work that they have done over the last year, and for Bob’s contribution, in particular, over the last six years in reminding us in my home state of Western Australia how important it is to maintain a strong relationship with Israel.