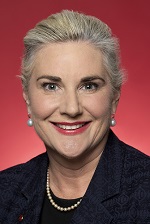 I think the ABC potentially has some questions to answer, because last year AbuGosh warned that ‘there is a great Zionist project to dominate and control all Arabs in the region’. That sounds very anti-Israel to me. Is that the view of the ABC? But it gets worse. Surprisingly, it gets worse.

Senator HUGHES (New South Wales) (13:13): Yesterday I made a two-minute speech with regard to the trip to Israel that I took under AIJAC, the Australia/Israel & Jewish Affairs Council, and some of the disturbing things we learnt when visiting Ramallah and meeting with the Palestinian Prime Minister.

I began to touch upon some appalling behaviour that has apparently been endorsed by the Australian Broadcasting Corporation, the ABC. Fouad AbuGosh has worked for the ABC since 2004 and in fact, even more appallingly, won a Walkley award in 2016 for his reporting from Syria—but we know what the status of the Walkley awards are in this current day and age. He has now deleted his Twitter account. It is important to note that, prior to deleting this account, just a week or so, AbuGosh’s official title on his Twitter account read: ‘Middle East producer for Australian Broadcasting Corporation. Opinions are mine and ABC’s.’ I think the ABC potentially has some questions to answer, because last year AbuGosh warned that ‘there is a great Zionist project to dominate and control all Arabs in the region’. That sounds very anti-Israel to me. Is that the view of the ABC? But it gets worse. Surprisingly, it gets worse.

In April this year, there were further posts in response to a screenshot of an Israeli policeman detaining an unidentified civilian. I was lucky enough to be in Israel just last week. Those of us who have experienced Israel, who understand where the borders are and what is occurring within the different areas—particularly around Jerusalem, Bethlehem, the different parts of Temple Mount, all of the old city of Jerusalem and the very holy lands—know that what is portrayed in the media is not necessarily what is actually going on. Never let the facts get in the way of a good story, particularly in the ABC!

In response to that photo—and apparently this is the view of the Australian Broadcasting Corporation—Abu Ghosh tweeted:

This is how the Nazis treated the Jews, maybe it’s time for….!!!!

To me, that is up there with one of the most appalling things you could possibly say. But this is the view of the Israeli correspondent in the Middle East, who, on his Twitter account—until it was recently deleted—determined that these were not only his views but the views of the ABC. David Anderson, Ita Buttrose and the rest of the ABC deserve to give every Australian who pays for this organisation an explanation. They deserve to let all Australians who fund them—not only Jewish Australians, not only our friends in Israel—know if these are their views. It seems to me that they are going out of their way to ensure that they alienate huge sections of the community and contribute to the misinformation that is consistently being peddled.

I will touch on another issue very briefly, and I’m sure I will come back to this. One of the things that we heard whilst in meetings in Israel is this new piece of propaganda that somehow Israel is a state of apartheid. This emanates from an antiracism conference in Durban which was deliberately put there in coordination with a group of Arab states and the Palestine Liberation Army. The PLO and Arab states put together an antiracism conference in Durban, and somehow they compare Israel—Israel is the most inclusive state, as those who have ever been there know.

One of the people we met with, who is absolutely amazing, is an Arab citizen of Israel. He’s been a journalist there for over 38 years, and he said that he was incredibly grateful to live in Israel. I would have thought that, if you’re an Arab Israeli and this is really a state of apartheid, that’s probably not where you’d want to be. As I said, I’m going to come back to this. Amnesty International has used a definition of apartheid that has never been signed by a Western nation—it was actually only developed by the USSR—to claim that Israel is an apartheid state. Amnesty International is discredited. It is disgraceful, and the ABC owes us an explanation.