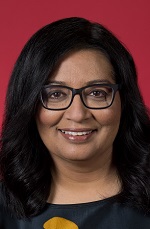 Senator FARUQI (New South Wales) (21:41): Today is the International Day of Solidarity with the Palestinian people. The year 2022 has been a year of tragedy after tragedy. Yet, day after day, the courageous Palestinian people resist occupation and oppression.

On 15 April, Israeli forces stormed the Al-Aqsa Mosque compound in Jerusalem and injured more than 150 Palestinians, including children. This was an appalling attack and a flagrant violation of international conventions. On 11 May, veteran Al Jazeera journalist Shireen Abu Akleh was killed by Israeli forces while on assignment in the occupied West Bank. She was wearing a protective vest marked with ‘press’ in big bold letters and standing with other journalists when she was shot dead by an Israeli sniper. It was an assassination for which we have seen no justice, and she is the latest in a long line of journalists killed by the Israeli military.

On 5 August, the Israeli regime began a three-day bombing assault in the Gaza Strip, which killed at least 49 Palestinians, including 17 children, and injured hundreds of others. On 18 August, seven Palestinian civil society and human rights organisations were forcibly shut by Israeli raids. Offices were ransacked, equipment confiscated and doors welded shut. Six were labelled terrorist organisations with no credible evidence. These are organisations working in areas such as human rights, prisoner support, children’s rights and health care.

On 30 August, an Israeli court sentenced Mohammad El Halabi, former head of operations at World Vision in Gaza, to 12 years in prison. He has been imprisoned despite several independent investigations showing no evidence of any wrongdoing on his part. His sentence appeared to have only one purpose: to stop aid organisations from supporting the desperate humanitarian situation in Gaza.

Earlier this month, Israeli forces demolished a recently built Palestinian primary school in the Masafer Yatta region of the occupied West Bank, where residents are facing the ongoing threat of forced displacement. The school was demolished while in session, with students inside. The school demolition came days after an 18-year-old Palestinian student was shot dead by Israeli forces while he was on his way to school.

With all this violence, death and injustice there is still no action from the Australian government. What is happening in Palestine is this: Israel is committing the crime of apartheid. Human Rights Watch has said it. Amnesty International has said it. The UN special rapporteur for Palestine has said it. The Australian government must loudly call out every injustice committed and firmly resist Israel’s attempts to whitewash its crimes. We know from a recent report that the Israel lobby is in overdrive. In the last four years, Australian federal parliamentarians received more sponsored trips to Israel than any other country. As former Labor Minister for Foreign Affairs, Bob Carr, said, the trips, and other activities, have only one objective, and that’s to see that no matter what Israel does it will never be criticised by Canberra.

The Australian government should also increase funding to agencies like the United Nations Relief and Works Agency for Palestine Refugees in the Near East, known as UNRWA. UNRWA supports 5.7 million Palestinian refugees, including providing education, medical clinics, food distribution and emergency assistance. Most of these people are stateless and living in poverty. Among them are more than half a million Palestinian children who UNRWA provides with education.

Under the Labor government, Australia, quite rightly, became one of UNRWA’s largest donors. But in 2018, the then US president Donald Trump abruptly halted US funding for UNRWA. Pathetically and predictably, our own Trump-wannabe PM at the time followed suit, halving our contributions from $20 million to $10 million. Thankfully, Labor has reversed the coalition cuts but the amount needs to be much higher. I urge the government to do the right thing and urgently increase the funding to $40 million per year.

The Greens express our full solidarity with the Palestinian people and their struggle. I will always, unapologetically and proudly, stand against occupation and for Palestinian rights to self-determination.