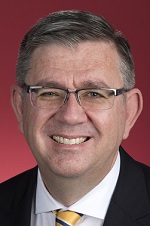 So it greatly concerns me that in this place there are those who seek to make short-term political issues out of these matters. We must unite as a community, as a country, against vile extremism, whether it’s from the Left or the Right. This should not be a political matter in this chamber.

Senator SCARR (Queensland) (17:31): Quite often I rise in this place and the person sitting in your spot, Madam Acting Deputy President, mistakenly refers to me as Senator Carr. Typically in response to that I say, ‘I’m not insulted by that because I do have a high regard for Senator Carr and I’ve learned a lot from Senator Carr from serving with him on a number of committees established in this place.’ However, today, I must say I’m completely at odds with his characterisation of my party.

I think the most disappointing thing about this resolution—and I note that it is not Senator Carr’s resolution; it comes from Senator Lines—is in part 2 where it refers to:

… the spread of far-right extremism and destructive conspiracy theories both within their own party and in the broader community.

Those are the words that really disappoint me. I believe, if we are to be successful in defeating extremism in this country, those of us who consider anti-Semitism, fascism and extremism of all types to be vile and unacceptable in our society need to come together. We should seek in our rhetoric in this place to bring each other together rather than to throw stones at each other.

I am going to talk about anti-Semitism in this context. I know Senator Carr is a passionate opponent of anti-Semitism in all of its forms in our community. I want to use that particular vile type of extremism as an example to demonstrate that extremism is not wholly the domain of the far Right. It occurs in the Left as well. If people coming into this place want to be sanctimonious and throw stones at this side of the chamber, they better be prepared to hear the sound of shattering glass.

Let me quote to you from the Executive Council of Australian Jewry’s 2018 report on anti-Semitism in Australia. I am not going to specifically name the members of the Left who are referred to in this report. I am not going to refer to the members of the Left. I am not going to make it personal. I am just going to quote from a number of case studies. The first one was a New South Wales Labor upper house MP and opposition whip at the time of this report. He refused entry to a leader of the New South Wales Jewish community at the launch of the Labor Union Multicultural Action Committee on 13 August 2013. The Labor Union Multicultural Action Committee itself did not invite any representatives of the Jewish community to the launch, but representatives from other ethnic communities and organisations were invited. More than 10 other ethnic community organisations expressed outrage at the discrimination and exclusion of the Jewish leadership and community. That is example No. 1 from the Left, Senator Carr.

I now refer to example No. 2—again, from the Left. This was a Labor member of parliament between the years 2007 and 2016. Senator Carr may well be able to identify them, I suspect, as may Senator Sterle. This person was the Labor candidate for the WA seat of Curtin in the 2019 federal election, before they had to withdraw their candidacy. Let me quote to you the vile statement, the vile misinformation, expressed by this person—a candidate for the federal Labor Party:

One case I remember vividly, a pregnant refugee woman was ordered at a checkpoint in Gaza to drink a bottle of bleach.

It burnt out all her throat and insides. Fortunately her baby was saved.

Another refugee was forced to put her baby through the X-ray machine.

It’s a vile lie and it’s misrepresentation and misinformation from an endorsed Labor candidate who, thankfully, did not pursue her nomination and did not stand for election. In response to this misinformation, this vile information from the Left, a journalist by the name of James Campbell responded:

Considering the long history of slanders of the Jewish people, it’s really quite an achievement to be an innovator.

After all, this is a people that has been accused over the centuries of sacrificing Christian children to obtain blood for Passover bread and nursing a plan for global domination.

Let’s go to example No. 3: a Labor candidate in the Northern Territory at the last election, who put up on Facebook something entitled ‘Rothschild Zionism’. The Labor Senate candidate for the Northern Territory posted anti-Semitic conspiracy theories on Facebook. These came to light during the election campaign. He posted an image in October 2016 of Jacob Rothschild. Both items were in support of David Icke—an absolutely vile human being—and his conspiracy theory that the Rothschild family secretly run the world by controlling the media, governments and global finance. Icke is also known for his anti-Semitic conspiracy theory that the world is run by a secret society of Jewish shape-shifting lizards. This was an endorsed Labor candidate at the last federal election, who was forced to resign as a Labor candidate in April 2019. And, before Senator Faruqi contributes to this debate, let me say that I’ve got examples of Greens candidates and Greens members of parliament who also appear in these reports.

A person I greatly admire in relation to combating anti-Semitism is a lady by the name of Deborah Lipstadt. She was the person who took that vile Holocaust denier David Irving to court and won. She won, when he brought a defamation case. Let me quote from her great book, which I recommend to all those people in this chamber. It’s called Antisemitism: Here and Now. On page 67, she says:

I’ll close by referring to a comment I made at the outset of this exchange, when I expressed the hope that my answers would leave both those on the right and the left—

on the Right and the Left—

discomforted. That discomfort should be caused by an acknowledgment on everyone’s part that extremism and antisemitism are found not only among people on the other side of the political spectrum. As long as we are blind to it in our midst, our fight against it will be futile.

That is the great Deborah Lipstadt, from her book Antisemitism: Here and Now.

Finally, I quote from the 2020 report of the Executive Council of Australian Jewry. Page 101 of their report says:

There is a distinct overlap between sections of the far Right and far Left when it comes to Jews and/or Israel. Nazi-style Jew-hating comments have frequently been posted on anti-Israel or pro-Palestinian social media pages of ostensibly left-wing organisations, and elicit supportive posted comments.

So it greatly concerns me that in this place there are those who seek to make short-term political issues out of these matters. We must unite as a community, as a country, against vile extremism, whether it’s from the Left or the Right. This should not be a political matter in this chamber. We should unite as a country and provide a united front and support for all groups in our society, whether they’re Indigenous Australians, people who are multigeneration Australians, or our newest migrants. Certainly my community in Queensland expects me to do that, and I request them to judge my performance in this regard on what I say in this place every single day I have the honour of serving here.