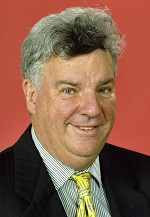 Senator BOSWELL (Queensland) (16:11): The motion I moved was actually congratulating one of Senator Brown’s members of parliament. How anyone can construe that as an unmitigated attack on the Greens is beyond comprehension. Senator Brown is floundering, and he is as guilty as sin on this. I have in my possession photographs taken with a swastika super­imposed on a Jewish flag. I have here a Star of David superimposed over a pig on a placard. That is shameful from anyone’s perspective. I know Senator Milne is terrified about this and worried about it. She is a decent woman and does not want to be associated with this. I do not blame her for one minute.

This matter has to be debated. We have to find out one way or the other whether Senator Brown and his party believe in a BDS—a sanction over all Israeli businesses and all trade with Israel and all sporting connections. Senator Brown says he does not but every time he is put to the test he goes down. Every time he is requested to make a decision in the Senate he votes against it. He voted against it again today. It is no good going out there and every time you meet the press saying you have pulled Senator Rhiannon into line and you have spoken harshly with her and you have had vigorous debates. She thumbs her nose at you continually. She has said there has never, ever been a decision on the BDS in the Greens—it has never been voted on. If you do not have the guts to put a proposition to your own party, if you cannot go to your own party and put up a motion without fear of it being defeated, then you are not a leader’s bootlace. You are a chameleon—you do not know whether you are for something or you are against something. You are being exposed as a great fraud.

The DEPUTY PRESIDENT: Senator Boswell, please address your remarks through the chair, not directly across the chamber.

Senator BOSWELL: I am sorry, Mr Deputy President. This has been an ongoing problem for this parliament and this chamber. Senator Brown attracts eight or nine per cent of the vote. What the people who support the Greens want to know is whether the Greens are an environment party, a green party, or whether they are an anti-Semitic, extreme Labor party—more than Labor; more than Dougie Cameron; he is to the left but the Greens are to the left of the left of the left of the Left. We have to know, and this is why this motion of censure has to be put to the Senate. It is going to be interesting to see where the Labor Party goes on this. I know they are going to be stuck between a rock and hard place. I hope they have the courage of their convictions and vote the same way as they voted in the last motion. I have warned the Labor Party time and time again. In fact the last time I warned them I said: ‘Your vote is going down like a lift. You’re on 34 per cent. It’s time you stood up to the Greens. It’s time you threw out the anchor. It’s time to reclaim your own territory.’ There was no acceptance of me warning them. Now their vote is down to 25 per cent or, if you take the Greens two per cent that has been transferred, it is 27 per cent. You are going down like a brick. You have been warned to disassociate yourselves from the Greens and you are paying the price now because you will not take any notice of the warning.