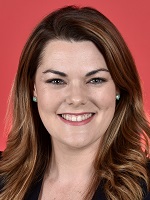 Senator HANSON-YOUNG: Mr Anderson, there’s been some commentary in relation to a petition that Australian journalists, media workers and writers have signed in relation to fair reporting on Palestine and Israel… It’s been asserted by some people who have signed this letter and organised this that reporters at the ABC were encouraged to not sign it. Are you aware of that?

Senator HANSON-YOUNG: Mr Anderson, there’s been some commentary in relation to a petition that Australian journalists, media workers and writers have signed in relation to fair reporting on Palestine and Israel. Are you aware of that open letter?

Senator HANSON-YOUNG: It’s been asserted by some people who have signed this letter and organised this that reporters at the ABC were encouraged to not sign it. Are you aware of that?

Mr Anderson : I think that, on inquiry—this is my understanding—some reporters that sought advice were reminded, along the lines of our use of personal social media, that they should not do anything that otherwise compromises their ability to be seen to be impartial when reporting any matter. As to whether our people were actively getting in touch with reporters, I don’t know of that.

Senator HANSON-YOUNG: So you’re saying some ABC staff—journalists or other roles—sought advice as to whether they were able to put their name on a letter. Is that what you’re saying to me?

Mr Anderson : So I can’t give names, and I don’t know—

Senator HANSON-YOUNG: I’m not asking for names. I guess I’m just asking for clarification as to whether there was any direction given to staff not to sign this letter.

Mr Anderson : I know of no direction, no.

Senator HANSON-YOUNG: Okay. Has it been raised at a management level?

Mr Anderson : Yes, we have discussed it. We’ve looked at—along the lines of, as I said before, use of personal social media—people’s names appearing on a petition, particularly. I don’t think any of our staff are compromised in any way. Judge people by what it is that they publish and what it is that we present the Australian people and what we do officially. I think that’s how people should be judged. And I think our reporting is of the highest standard and we hold ourselves to account. So the fact that people have made their own choice as individuals to put their name on that petition is one thing. But I think they should be judged on their reporting.

Senator HANSON-YOUNG: Just to be clear, what you’re saying to me, then, is there has been no direction to stop people from signing this open letter. Do I take it from that there’s been no disciplinary action for people who have?

Mr Anderson : No. I have not issued a direction, and I know not of any of my team that have either, when it comes to not signing that petition. Certainly no disciplinary action has been taken by anyone who put their name to it.

Senator HANSON-YOUNG: Have you received any concerns or complaints—and perhaps this is from an editorial perspective—internally about the coverage that the ABC has given to the recent terrible activities and violence in the Gaza Strip?

Mr Anderson : Have we had complaints? Yes. I went through those before. We’ve had 57 editorial complaints overall with regard to this terrible situation that’s happening overseas; 29 complaints have alleged particular coverage was pro-Palestine—

Senator HANSON-YOUNG: My question is: have there been any internal complaints in relation to the coverage?

Mr Anderson : Not that I know of.

Senator HANSON-YOUNG: Is that something you—

Mr McMurtrie : Not that I’m aware of, no.

CHAIR: Senator Hanson-Young, you can have one very quick supplementary question.

Senator HANSON-YOUNG: Thank you, Chair. Mr Anderson, does the ABC have a specific style guide to direct journalists and your staff as to how to report and publish information in relation to Israel and Palestine?

Mr Anderson : Anything regarding a style guide, I would suggest, is our editorial policies, which we ask and demand that our journalists abide by. There are certain guidelines that go with that. Mr McMurtrie, is there anything you’d like to add?

Mr McMurtrie : We provide guidance, particularly on a story like the big one we just had recently. We provide guidance every day directly to journalists working on stories. And sometimes, when we need to clarify something, we will issue a note—if that’s what you’re referring to.

Mr McMurtrie : There isn’t a standing document which deals with reporting just that one particular issue, no.