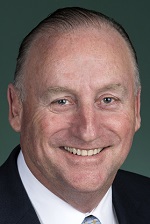 I rise today in support of the motion put forward by the member for Fadden in respect of Israel’s right to defend its citizens against terrorist attacks…Like all conflicts, the issues surrounding that of Palestine and Israel are complex. I strongly support the member for Fadden’s calls for Israeli and Palestinian authorities to return to negotiations in good faith and without preconditions. Peace is the goal.

Mr IRONS (Swan) (11:36): I rise today in support of the motion put forward by the member for Fadden in respect of Israel’s right to defend its citizens against terrorist attacks. I am reminded that Australia has had a long involvement with Israel. On 31 October, it will be the 100th anniversary of the charge of the Light Horse Brigade which led to the liberation of Jerusalem in December 1917. It shows that Australia has had a long involvement.

It is a pleasure to support the member for Fadden and the work he has done in this space for a very long time. Ever since we entered the parliament in 2007—and I am sure he did it before that—he has been a strong supporter of the state of Israel and very vocal and committed in his beliefs. I would also like to acknowledge the member for Melbourne Ports, who has been a consistent advocate and supporter for the state of Israel. I know that during the time I have been in parliament he has never shied away from making his thoughts and ideas known about that particular issue. I would also like to thank the member for Fadden for his passionate speech on this issue, which I know he holds very close to his heart.

Mr IRONS: Thank you. In 2005, Israel withdrew from the Gaza Strip with the intention that Palestinians would be able to set-up a peaceful autonomous region within Israel. The expected flow-on effects of this were that it would lead to further withdrawal from the West Bank. Instead, the Palestinians retaliated with rocket and mortar fire, and the situation was further exacerbated when Hamas took over the Gaza Strip after a coup in 2007. Ten years on, Palestine has sought to use international organisations such as the United Nations to put pressure on Israel and to gain recognition of their state from as many government and non-governmental bodies as possible. In doing so, Palestine has avoided the need to compromise in the path to long-term and genuine peace whilst continuing to voice claims against Israel, particularly the claim to the right of return. As the member for Fadden has noted, this is not a recipe for peace but has continued to cause friction and encourage further conflict. In a speech to the United Nations General Assembly in 2015, Prime Minister Netanyahu noted that, in the preceding 12 months, the General Assembly had adopted 20 resolutions critical of Israel compared to just one in response to the war in Syria, which has resulted in more than 250,000 people killed or driven from their homes.

I would like to expand on this for the benefit of the chamber: the world has been shocked by the number of people displaced because of the conflict in Syria and Iraq. The brutality of the Assad regime and the Islamic extremists are an enormous threat to security within the region and to the safety of civilian populations. We have heard of indiscriminate violence, slaughter of innocent and unarmed civilians and continued persecutions of religious groups.

On the other side of the world, the decisions of the North Korean military regime are deeply concerning. I encourage all states to consider their paths and move towards a peaceful future, which is what this motion that the member for Fadden has brought to the House is about. I echo the sentiments of the Prime Minister, from earlier this year, in saying that the coalition government will not support one-sided resolutions criticising Israel of the kind recently adopted by the UN Security Council. We deplore the boycott campaigns designed to delegitimise the Jewish state. The Boycott, Divestment and Sanctions—BDS—movement encourages conflict, allows for the persecution of civilians and is in no way an effective strategy to achieve peace within the region. In an article attacking the BDS campaign, Charles Krauthammer writes:

And don’t tell me this is merely about Zionism. The ruse is transparent. Israel is the world’s only Jewish state. To apply to the state of the Jews a double standard that you apply to none other, to judge one people in a way you judge no other, to single out that one people for condemnation and isolation—is to engage in a gross act of discrimination.

And discrimination against Jews has a name. It’s called anti-Semitism.

It’s a privilege to support the member for Fadden in his motion for peace.