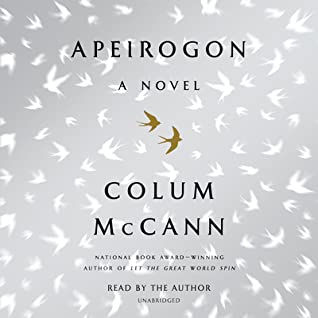 Colum McCann, the Irish author of Apeirogon, A novel, was the focus of a Zoom session during the recent Melbourne Jewish Book Week.  In conversation with Mark Raphael Baker, he related being told “you think Ireland is complicated?  You ought to come to the Middle East!”   He has since travelled there many times and uses W B Yeats’ phrase “a terrible beauty” to describe what he sees.

Apeirogon’s source lies in Kingdom of Olives and Ash: Writers confront the Occupation, published in 2017 with contributors including Colm Tóibín, Geraldine Brooks and Mario Vargas Llosa.  McCann’s essay, Two Stories too Many was based on a visit to Beit Jala near Bethlehem to meet members of the organisation Combatants for Peace, in particular Palestinian Bassam Aramin and Israeli Rami Elhanan.  McCann returned to his New York home wanting to write more.  Apeirogon, recently long-listed for the 2020 Booker Prize,is the result.

The definition of apeirogon is “a shape with a countably infinite number of sides” – from the Greek, apeiron: to be boundless, endless and the Indo-European root of per: to try, to risk.  Within the shape “anywhere is reachable.  Anything is possible, even the seemingly impossible.”  It is a complicated definition for the complicated, intractable situation in Palestine and Israel, but surely it is an expression of hope.  McCann’s admits some sections are invention, but the basis is cold, hard, heart-breaking facts.  It is a moving story based on grief and loss.

Bassam and Ram, now known internationally for their advocacy for peace and dialogue in their troubled homelands, became members of another group, The Parents Circle Family Forum, whose tragic qualification for membership is the loss of a beloved child.   Rami’s daughter, Smadar, aged almost 14, was killed in 1997 by a Palestinian suicide bomber in East Jerusalem while shopping with friends and listening to her Walkman.  Ten years later, Basam’s ten-year-old daughter Abir, was shot in the back of the head with a rubber bullet by an Israeli Border Guard on a school day, leaving a sweet shop after buying a candy bracelet for her sister.

Rami, identifies now as an Israeli against the Occupation, served as a soldier in the October 1973 war in Sinai.  He later studied art and design and established a successful career as a graphic artist.  Bassam, arrested after attempting an act of revenge on Israeli troops, served seven years in jail.  He used those years of cruel incarceration to learn Hebrew and English, to study Gandhi and Martin Luther King and to think deeply.  A television documentary about the Holocaust seen in jail, led years later to a scholarship to Bradford University.  The oldest in his class in Peace Studies, this Palestinian, Muslim activist’s master’s thesis was titled “The Holocaust: The use and abuse of history and memory”.   They are unusual men.

Throughout the powerful book, seemingly disconnected topics inevitably link to the philosophical apeirogon – stones, salt, Theresienstadt, shrapnel and above all birds; real, created, symbolic, their powers of flight and patterns of migration.  McCann has the fathers, now close friends and powerful allies, returning again and again to the details of their daughters’ murders.  They are highly articulate, likeable men who travel worldwide, relating the stories of their lives and losses while advocating for peace, reconciliation and healing.  In the middle of the book they are given their own voice in statements made to McCann.  The book is arranged in a curious way with 1001 chapters, some only a line or two long, numbered 1-500 and then 500-1 with 1001 in the centre.  The reference is to the classic orientalist 1001 Nights or Arabian Nights, where the king postpones the story-teller’s execution for another night in order to hear the rest of the story.

Rami and Bassam’s stories are truth itself, told over and over again, the two stories becoming one in their quest to prevent “this unbearable pain for others”.  They say that “it will not be over until we talk”.