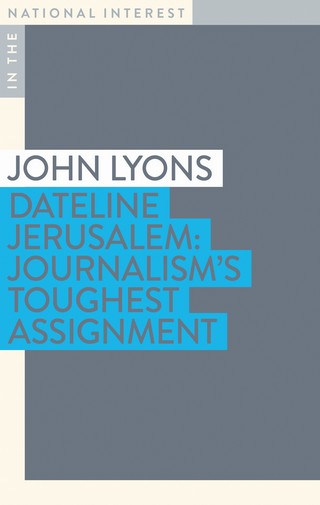 Veteran journalist John Lyon’s has just released an explosive 88 page book exposing the extent to which the Australian media is influenced by the pro-Israel lobby.  The book cites concrete examples of this influence drawn from interviews with journalists, editors, Palestinian Australians and from his own 40 years of journalism, including his 6 years serving as the Middle East Correspondent for Murdoch’s The Australian.

The book’s significance is as much about who has written it as it is about its compelling content: John Lyons is currently the Head of Investigative Journalism for the ABC. That is, the book has not been written from the safety of retirement and the rear-view mirror. Lyons is still ‘in the game.’ His message to his colleagues is a bold challenge to be braver, to be less self-censoring in their work.

The book also practices what it preaches by profiling the experiences of Palestinians in Australia.  Lyon’s text systematically describes how so many of these people have been maligned, denied publication or editorialized due to the actions of the local anti-Palestinian lobby. For example, he details negative experiences of Samah Sabawi, APAN Board members Bassam Dally and Issa Shaweesh, and senior journalist Maher Mughrabi. Most chilling is the experience of Palestinian Australian journalist Jennine Khalik who was just 21 years when she joined The Australian. The undermining of her work began with Israeli diplomats meeting with the Editor of the paper criticizing them for even daring to hire a Palestinian.  This account ascends to a hideous crescendo where Khalik is verbally abused by an editor who screamed “PALESTINE DOES NOT EXIST”.  Lyons concludes, “For me, its irrefutable that a double-standard exists in that, if someone has a Palestinian or Arab background, they will be personally targeted, whereas this never occurs on the other side”.

The book also outlines key facts the author believes should be part of Australian media narratives, but are not. These include, that the so-called settlements, and their continual expansion, have a long-term strategic purpose; that the military occupation is brutal, and that the experience of systematic displacement in Jerusalem led to the protests in May 2021. These parts of the book seem to serve as a primer for how Palestinian advocates might speak to the less informed “Joe public” about Palestine.

Lyons contends that the Australian media are far more timid than the Israel media. In making this claim he cites the example of his piece Stone Cold Justice. This story, he notes, was published without controversy in Israel, but faced complaints in Australia before it was even aired.. This is perhaps Lyon’s key point: “the Israeli-Palestinian issue is the single issue – the only issue – which the (Australian) media will not cover with the rigor with which it covers every other issue.”

The book describes in detail the tactics of lobbyists – the high-class all expenses paid tours to Israel for politicians and journalists, the weasel-worded fact-sheets and briefings, the barrage of complaint letters to media outlets, and the power of political donations.  While painting the lobbyists as ferocious, relentless and presumptuous in their approach, he is not overly critical of their tactics per se. Rather, Lyons’s primary criticism is that journalists and editors should not allow these tactics to influence them.  “In my experience, very few editors or journalists will say no to Rubenstein, the only lobbyist in the country known only by his first name”.  He quotes Chris Mitchell, former editor of The Australian – “It’s important for journalists not to have their thought-patterns mapped out by lobbyists.”  This conclusion raises some interesting questions about the way power operates. That is, the media is supposed to be the fourth pillar of democracy, but it is very naïve to think that the media are not influenced by the reach of actors who have the political power to influence decisions. Colin Rubenstein isn’t powerful only because he asserts he is, but because powerful people think he should be listened to. Just this month one of the most prominent pro-Israel lobbyists was appointed by a federal minister to the SBS Board. In so many ways, politics influences our media.

The book has already struck quite a chord. Responses have been written by the publisher, Palestinian authors, a former Foreign Minister, other former Middle East Correspondents, and unsurprisingly the pro-Israel lobby.

Encouragingly, the response to the book presents a positive indication that the media is capable of responses that do not cower.  For example, the Sydney Morning Herald has published Lyons’ Opinion Piece about the book, and he has been interviewed on the ABC’s Radio National. Independent bookshop Gleebooks hosted an event with John Lyons and Stan Grant, saying it was its most popular event it has ever held.

The media clearly can do better, and they might just yet do that.