The Hundred Year’s War on Palestine: A History of Settler Colonial Conquest and Resistance 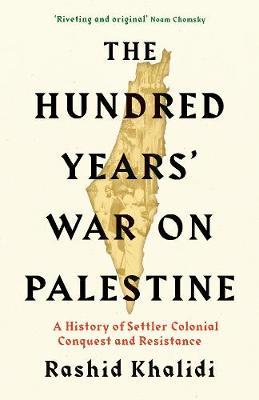 The Hundred Years’ War on Palestine chronicles the many conflicts that have afflicted Palestine. Starting with the double-cross, inspired by the Zionist movement and implemented by the Western powers, notably Great Britain, in the period during and after World War I; continuing to the assaults on Gaza culminating in the violent destruction in 2014. Khalidi includes comments on the Trump Presidency so the timespan of the book is from Balfour to Trump.

The root of the issue is the Zionist colonial enterprise and its territorial ambitions. Khalidi not only identifies Israel’s Zionist and colonial ideology, he also pinpoints other matters which underpinned the ongoing conflict. These include the intransigence of successive US administrations; the divisions in the PLO and the PA and their lack of transparency and strategy; the situation where opponents of Israel invariably underestimate the Israeli military superiority and the fact that some Arab governments, while mouthing words of support for the Palestinian cause, make accommodations with Israel.

Does Khalidi offer any hope for peace after 100 years of war? He says that the Palestinians and Israelis should build bridges between themselves, the US needs to be isolated, the PA needs significant reform to make it more sophisticated, and it is urgent to build public opinion in the west and in the Arab countries. These ideas are contestable but are worthy of vigorous discussion.

Khalidi’s writing is scholarly with interwoven personal views including references to his grandfather, an official in the Ottoman Empire and his own memories first as a child of a UN official and later as a resident of Beirut during the 1982 siege. He also includes the voices of journalists, poets and resistance leaders.

The book is highly recommended.