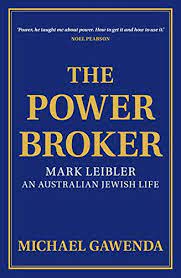 Mark Leibler is a taxation specialist and Zionist lobbyist. According to Michael Gawenda, ex-Fairfax editor and the author of this biography, Leibler has had tremendous success in both these roles. Not only does this book give the critically informed reader the chance to consider this claim, but a gift is given that the author may be unaware he has offered: the outing of the assumptions and biases that give the book its context and meaning.

Gawenda features two examples of Leibler’s “triumphs” in representing wealth. The first concerns his success in campaigning to save his clients from the consequences of their involvement in the infamous ‘bottom of the harbour’ tax avoidance scheme; the second his success in lobbying the Australian government to minimise the tax liability of those who repatriate funds that had been deposited in Swiss banks at the time of the second world war.

The book also features many examples of Leibler’s effectiveness as a Zionist leader and lobbyist. These stories are presented, in the main, without apparent ethical concern. Also troubling, key instances are reported as fact without corroborating evidence; what is reported as fact is often what Gawenda read in Leibler’s personal notes, or had said in his discussions with the author. This elision delivers a curious benefit – one can learn more than the author probably intended. This is especially true for neutral readers and those aligned with the Palestinian cause. How so? Because even-handedness and reflectiveness are eschewed, the reader is given uncensored access to the author’s awe-stuck account: look at a Zionist warrior’s leadership and lobbying power! In this sense the reader is taken on quite a ride.

For example, the reader is told the Australian government had no in-principle objection to the extra-judicial killing of Mahmoud al-Mabhouh, a Hamas official, by Mossad agents in Dubai in 2010 but that Kevin Rudd, the then prime minister, was angry the killers had used fake Australian passports. Not only did prime minister Rudd judge this forgery egregious in and of itself, he was incensed because Israeli agents had previously been caught using fake Australian passports in 2003 and had made the commitment to not do this again. That Israeli authorities were prepared to disregard the position their misuse of the status accorded an Australian passport had very worrying implications, for example, some observers would read this to mean that Australia was complicit in a controversial murder, and/or that Australia was should be perceived as an Israeli poodle, as. This difficult circumstance demanded an intervention. Enter Mark Leibler, the hero. Our fixer-king not only talked to Stephen Smith, the foreign minister, he met with Dennis Richardson, the head of Department of Foreign Affairs and Trade (and ex-ASIO boss), and he also arranged to meet with the head of Mossad. His mission? To smooth over, to move on from, this hiccup. Putting aside Gwenda’s awe at his subject’s power, what is to be made of an unelected lobbyist being given privileged access to the highest level of the Australian government whilst also having access to the head of the security service of another sovereign state?

That Leibler played this role was transgressive. What is also notable is that, in effect, the author boasts about this aberrant happening. This is a tell. It is a message that becomes clearer as the book builds towards its congratulatory conclusion. Progressively, hubris is lead out from the shadows to bask in the sun. Without any effort at disguise, along the way the reader is told of Leibler’s success in cultivating, and eventually suborning, key Labor Party figures. Less shocking is his success in dictating to Liberal politicians. This latter point is summarized in a 2013 quote attributed to Tony Abbott: “Oh, my position (on Palestine/Israel) is whatever Mark (Leibler) and Colin’s (Rubenstein) position is” (341).

The reader is being told ‘our’ lobby – the Zionist lobby – owns the game. This status is celebrated to such an extent the author fails to recognize what the unbiased reader will find offensive. For example, it is reported that Leibler lobbied Alexander Downer to allow Israel-directed donations to remain tax deductible despite the rule that this status was inapplicable to donations directed to ‘first-world’ nations. The author tells us Leibler won the argument by guaranteeing Downer donations would only be directed to recent immigrants and the poor. Several pages later the reader is informed the majority of donated funds will be directed to promoting Zionist renewal in the USA. The message given to the reader is that Downer was duped, but that’s OK. More speculatively, the reader might read into this affair the implication that, if you think you’re the boss, there is no surprise if you occasionally let your disguise slip. After all it’s good for your prestige, every now and then, to have a crow.

A deeply troubling aspect of the book concerns Leibler’s reported approach to people. Not only is he reported to be serially ruthless and bullying, multiple accounts describe him as a manipulative user. His method is to ‘develop his political networks over the years – with informal meetings and contacts, and in some cases, by developing (targeted) friendships’ (111). Once identified, the person of influence is groomed to achieve a strategic friendship. Gawenda’s account of how Leibler developed his ties with Julia Gillard illustrates his dubious prowess. This is his message: I am caring and loyal, a teacher and a fixer, but beware – if you betray me, if you break with my friendship, know there will be hell.  Graeme Samuel, then boss of the ACCC, can testify to this vengefulness. Daring to defy his patriarch, Samuel’s became a “pariah” for prosecuting billionaire cheat Dick Pratt. Who said ‘hold your friends close, and your enemies closer’ ?

Although it has the status accorded a university house publication, the book has no chapter titles, no index, no references and only a sketchy glossary, e.g. there is no definition of Zionism. This speaks of smug and lazy journalism. More, the prose is flat; the pitch only occasionally rises to eulogize the hero or castigate an enemy: Bob Carr is said to have acted “like a spurned lover” for objecting to the attack methods employed by the Zionist lobby.

Criticisms noted, this book can be read in a way that raises topics that genuinely deserve discussion. Not least of these is a purported identification between Zionists and Australian Aboriginal people (Despite its misshapen logic and historical inaccuracy, this proposition is egregiously asserted in the book; a less partisan account surely would have problematised, rather than egregiously re-cycled, this fallacy).The author also fails to distinguish power from authority, or to question Leibler’s ruthless appropriation of the right to speak on behalf of all Australian Jews. These flaws signal an endemic bias: anyone who describes the sustained assault on Gaza in 2008, an attack that killed almost a hundred-times more Gazans than Israelis, as the “Israel-Gaza war” (267) cannot pretend to be even-handed. Perhaps the most provocative topic raised is implicit. Can a land be meaningfully shared if the disposition of one side is reflected in the views the author attributes to Mark Leibler?