Till We Have Built Jerusalem: Architects of a new city 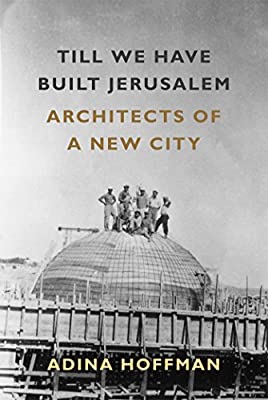 American writer, Adina Hoffman divides her life between Jerusalem and USA.  She spoke recently on ABC RN’s Blueprint for Living about Till we have built Jerusalem.  A much-acclaimed earlier book was the first biography of a Palestinian writer ever published.

Modern Jerusalem was built, not in Blake’s words, ‘in England’s green and pleasant land’, but beyond the ancient city walls after the Ottoman Turks constructed the Jerusalem to Jaffa road in 1867.  Today a walk along this road reveals in close proximity, Spyro Houris’ apartment building, Erich Mendelsohn’s Anglo-Palestinian Bank and Austen Harrison’s Central Post Office.

Erich Mendelsohn (1887-1954) pioneered Art Deco architecture before fleeing Nazi Germany to work in Jerusalem 1934-1940.  He recognised the Palestinian context and believed modern architecture should respect traditional culture.  Arrogant and difficult, he found in Jerusalem “every act is a struggle”; construction of the Hadassah Medical Complex and buildings on the Hebrew University campus exemplified this.  Initially he found the visible struggle invigorating, unlike the “concealed, clandestine” atmosphere of Europe, but the fight wore him down.

Austen St Barbe Harrison (1891-1976) was from 1923 to 1937 Chief Architect to the Department of Public Works in British Mandatory Palestine.  Fascinated by Byzantine and Islamic design, he included elements in buildings such as the former British Government House and the Palestine Archaeological Museum.  Refined, reclusive and “quietly inspired, he shared with the “defiantly visionary” Mendelsohn, the hope for a cosmopolitan Jerusalem.  The pacifist Harrison was crushed by the prevailing violence and fled the city.

Was Spyro Houris or Khouri (1883-1936) Greek or Arab?  Mendelsohn and Harrison’s careers are well documented, Houris’ story is mostly mystery.  Several of his buildings bear the enigmatic inscription, in Latin characters not Arabic, Spyro G. Houris, Architecte.  Such signatures were unusual and why the French “architecte”?  Exhaustive searches revealed little more than birth in Alexandria, death in Jerusalem and Freemason membership.  His legacy is highly-decorative private residences, then the height of chic, his eclecticism re-echoing Mendelsohn and Harrison’s stylistic cross-fertilisation.  He did not design public buildings, but accommodated the individual tastes of clients – Greek, Turkish, Ashkenazi and Sephardic Jews, Muslim and Christian Arabs.

Other fascinating characters inhabit the book – Salman Schocken, Mendelsohn’s wealthy patron in both Germany and Palestine; Ronald Storrs the “first military Governor of Jerusalem since Pontius Pilate” who decreed all Jerusalem’s buildings must be faced with local stone; David Ohannessian, the Armenian ceramicist whose magnificent tiles were used in the restoration of the Dome of the Rock.  One young man is unnamed – “unflappably Palestinian N., with his pious Muslim bearing and beard”.  Conversant with Ottoman Turkish, he helps the author search for Houris in the Israel State Archives, her despair heightened by the “steady stream of high volume anti-Arab invective” from an office telephone conversation about the dreadful 2014 summer war in Gaza.

This fascinating book is illustrated with many black and white photographs, tantalisingly tiny.  A Socratic quotation “Beautiful things are difficult” is the title of the section on Harrison.  It could be a leitmotif for the book.  Full of dichotomies, Jerusalem, indeed a beautiful thing, is difficult.