Palestinians have the right to their own land. However, this right is being eroded as Israel relentlessly pursues policies of land appropriation and transfers of its Jewish population onto occupied Palestinian territory, deepening its de facto annexation.  Israel also undertakes formal annexation of lands.  This factsheet clarifies the specific legal context and consequences of Israel’s actions.

A territory is considered ‘occupied’ when it is under the control of a hostile army. According to international law the occupying power is restricted by law to act only as the temporary administrator until it returns the territory in full, in as short and as reasonable a time as possible, back to the inherent sovereign and protected population.  The occupier is prohibited from:

Israel has and continues to breach every one of these conditions.  In addition Israel’s military occupation of Palestine has now been going for more than half a century – one of the longest in modern history.

There are two types of annexation, de jure where a state formally annexes a territory proclaiming sovereignty over it, and de facto where it is done implicitly.

Both forms of annexation are illegal under international law.

Since 1967 Israel has been systematically progressing an expansionist policy of annexation, which profoundly undermines the viability of the two state solution with East Jerusalem as the future Palestinian capital.

Israel’s policies create “Facts on the Ground” on occupied territory that are intentionally irreversible changes designed to control as much land and resources as possible, with as few Palestinian people on that land as possible.

In 1967 Israel occupied Palestinian East Jerusalem and extended the municipal boundaries, putting both East and West Jerusalem under its sovereignty and civil law. In 1980 it passed the Jerusalem Law, declaring “Jerusalem, complete and united, is the capital of Israel”, making its annexation explicit. The UN has repeatedly condemned Israel’s actions,  which are illegal under international law.  Until December 2017 when the Trump administration recognised Jerusalem as Israel’s capital, all states had collectively rejected Israel’s annexation.

Israel has disregarded calls to withdraw from East Jerusalem, instead systematically building and expanding Jewish settlements (now housing over 209,000 settlers) and oppressing Palestinian neighbourhoods with impunity.  Analysis by Israeli group Peace Now indicates that while Palestinians make up more than 60% of the population in East Jerusalem, they have received only 30% of the building permits issued since 1991. Israel’s policies, such as the May 2018 five-year plan for occupied East Jerusalem, aim to create a demographic and geographic reality to entrench the annexation.

Israel is increasingly proposing formal annexation of  illegal settlements and large areas of Palestinian land into Israel. In September 2019, Prime Minister Benjamin Netanyahu promised to extend Israeli sovereignty to all Israeli settlements in the West Bank, as well as to the Jordan Valley (home to 65,000 Palestinians and 11,000 Israeli settlers according to the Israeli human rights group B’Tselem).

Since 1967, Israel has allowed and provided incentives for more than 620,000 Israeli Jewish settlers to illegally and forcibly take possession of Palestinian land in the West Bank (including Jerusalem).

These settlers live under Israeli civilian law as if they are living in the State of Israel.  The settlements provide high quality infrastructure, Israeli only highways, public transport, shopping centres, sport and entertainment facilities. For Israelis, this infrastructure seamlessly integrates the settlements into Israel, hiding the reality that they are located on occupied Palestinian territory, and are not part of the internationally recognised State of Israel. At the same time, Palestinian movement is severely restricted.

Palestinian communities neighbouring settlements often experience attacks by settlers, as well as endure constant surveillance and incursions by the Israeli military.  These communities endure a humanitarian crisis, unable to access their agricultural land or sufficient water, unable to build any infrastructure or develop their communities without the permission of the Israeli military, which is invariably denied.  Palestinians have scant access to the Jordan Valley, the most fertile lands in the West Bank, as Israel has declared vast swathes of land as ‘closed military zones’ allowing settlers to farm the land.  Israeli human rights organisation B’Tselem estimates 40% of the West Bank is controlled by settlements.

Israel began building the separation wall in 2002 which has been deemed illegal by the International Court of Justice. The wall does not follow the 1967 border (Green Line), instead it incorporates into Israel large amounts of Palestinian land, cutting through villages, prohibiting Palestinian farmers’ access to their lands, and cutting off thousands of Palestinians living in Palestinian-populated areas in East Jerusalem.  Many see the wall as Israel pre-emptively claiming lands, especially now the Trump administration’s 2020 proposal concedes most of this land to Israel.

According to the Israeli rights group Yesh Din, Israel has adopted a number of laws in recent years, such as the 2017 settlement regularisation law, as well as other measures that apply Israeli law to the West Bank. Yesh Din states this reflects the “transition from de facto annexation to de jure annexation” of the West Bank. 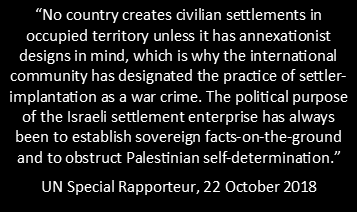 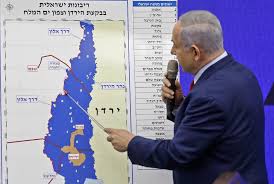