The international community has important systems in place to ensure people in power are held accountable for their actions – whoever and wherever they are. The International Criminal Court (ICC) is one such institution. The ICC has opened an investigation into crimes committed in Palestine. Shockingly, the Australian Government knows that this is the only place for Palestinians to have war crimes prosecuted but still argued against the court opening an investigation.

The International Criminal Court investigates and, where warranted, tries individuals charged with the gravest crimes of concern to the international community: genocide, war crimes, crimes against humanity and the crime of aggression.

Thus far there have been 30 cases before the Court, with some cases having more than one defendant.

The Rome Statute: Treaty which gives legal basis to the ICC

The Treaty that allows the International Criminal Court to function is the Rome Statute. It was adopted in July 1998 and gained the 60 ratifications required to bring it into force by 2002. Seven countries voted against the Treaty, including the USA and Israel.

There are currently 123 State Parties to the Treaty.

Since 2015, ICC prosecutors have undertaken a preliminary examination into allegations of war crimes and crimes against humanity in Palestine. These investigations have focused on settlements in the West Bank and East Jerusalem, and military attacks in Gaza. The investigation into the former is focused on possible crimes of the Israeli Defence Force (IDF), the latter also includes armed Palestinian groups such as Hamas.

The ICC prosecutor’s report released in December 2019 indicated that “all the statutory criteria under the Rome Statute for the opening of an investigation have been met” .

Given the complexity of the Palestinian territories, and that Israel is not a signatory to the Rome Statute, the ICC Prosecutor asked the “ICC Pre-Trial Chamber to confirm their opinion regarding the territorial jurisdiction”. The Pre-Trial Chamber invited submissions to its inquiry.

In February 2021, the Pre-Trial Chamber resolved that Palestine is indeed a State Party to the Statute, and that the alleged crimes had been conducted within this State’s territory of the Gaza Strip, and the West Bank including East Jerusalem.

It concluded that “Palestine has agreed to subject itself to the terms of the ICC Rome Statute and has the right to be treated as any other State Party for the matters related to the implementation of the Statute.”

On March 3 2021 the Prosecutor announced it would be commencing an investigation. The Prosecutor emphasised that the investigation “will be conducted independently, impartially and objectively, without fear or favour”.

Palestinians, including Hamas who faces investigation, welcomed the decision. The Israeli Prime Minister, who is facing domestic corruption charges, accused the Court of antisemitism.

APAN celebrates the decision as a major step towards ending impunity for actions committed in Palestine.

Australian positions on the ICC and Palestine

The Australian Government has voiced opposition to the ICC proceedings in Palestine, arguing that Palestine is not a state and therefore the ICC does not have territorial jurisdiction in this area. Australia was one of seven countries that  made formal representations to this effect to the ICC Pre-Trial Chamber. When the Pre-Trial Chamber released its ruling in February 2021 the Foreign Minister’s Press Release declared that Australia has “deep concerns” with the ruling, and “Australia does not therefore recognise the right of any so-called ‘State of Palestine’ to accede to the Rome Statute. The International Criminal Court should not exercise jurisdiction in this matter”.

During Senate Estimates in March 2020, a spokesperson from the Department of Foreign Affairs and Trade confirmed that Israel had made representations to the Australian Government on this issue. The spokesperson also stated that there is no other Court where Palestine could seek redress for any crimes committed in their territory.

Australian opposition parties have expressed their objections to the Australian Government position. In May 2020 a press release from Greens leader Adam Bandt stated that “it’s shameful that Australia lined up with just a handful of countries to try to deny the Palestinian people recourse through international institutions like the ICC”. In a letter to constituents, in August 2020 Labor Foreign Affairs spokesperson Senator Penny Wong stated “Labor is concerned about the Australian Government’s decision to provide observations, alongside several other countries, regarding the ICC’s ability to investigate alleged war crimes in the Palestinian Territories, which would appear to favour the legal position advocated by Israel”.

The Australian government consistently endorses, and calls on countries to respect the rules-based international order. It is concerning when the government undermines this order to support an ally, despite Israel’s violations of international law in establishing illegal settlements in occupied Palestinian territory, and its military committing serious crimes against unarmed Palestinian civilians, including children.

APAN calls on the Australian Government to support the International Criminal Court in all its investigations. 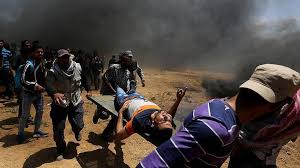