Why the IHRA Working Definition of Antisemitism is causing controversy

Discrimination of any kind has no part in the movement for a just peace for Palestinians.

We oppose discrimination and racism against Palestinians and we stand with our Jewish friends in identifying and challenging antisemitism wherever we find it.

We also need to ensure that accusations of antisemitism are not used in a way that shut down human rights conversations, which is why we do not support the use of the International Holocaust Remembrance Alliance (IHRA) Working Definition of Antisemitism as a tool for public policy.

Dictionary definitions of antisemitism are consistent, short and precise—such as The hostility toward or discrimination against Jews as a religious, ethnic, or racial group.

The IHRA is an inter-Governmental organisation founded by the Swedish Prime Minister in 1988. It focuses on Holocaust education, research and remembrance worldwide. Australia is one of 34 member countries, having joined in 2019.

The working definition of antisemitism is based on a draft developed by the European Monitoring Centre on Racism and Xenophobia in the early 2000s, which was never formally adopted.

This working definition was adopted by members of the IHRA in 2016, following intervention from the Simon Wiesenthal Center. The Center, a pro-Israel organisation which has attempted to smear the work of UN bodies in Palestine, boast that they “introduced and steered the Working Definition to adoption”.

The definition is increasingly being used as a tool for public policy, having been adopted in a number of countries including by the US State Department, Germany, France and Israel, as well as organisations, local councils and political parties.

Who has concerns with IHRA definition?

Kenneth Stern – key drafter of IHRA definition. He states the definition is being used to “restrict academic freedom and punish political speech”.

Human Rights Groups – including Liberty in the UK.

Jewish progressive organisations – a joint statement was issued by 41 groups worldwide in 2018 and the Progressive Israel Network in 2021. Signatories to these statements include: New Israel Fund; J-Street; Jewish Voice for Peace. The New Israel Fund in Australia made their own statement in October 2021.

122 Palestinian academics and intellectuals in 2020.

Concerns about the IHRA definition

Definitions will always be contested. What is concerning, however, is that the definition is used to police speech. The examples of antisemitism provided by the definition have been taken up in a way which enforces unacceptable limits on what can be said.

In both Canada and the UK, funding to universities is being threatened unless they adopt this particular definition.

This is happening in a broader context where accusations of antisemitism are being used to stifle legitimate debate and criticism of the policies and actions of Israel.

Text of the IHRA definition

Antisemitism is a certain perception of Jews, which may be expressed as hatred toward Jews. Rhetorical and physical manifestations of antisemitism are directed toward Jewish or non-Jewish individuals and/or their property, toward Jewish community institutions and religious facilities.

To guide IHRA in its work, the following examples may serve as illustrations:

Manifestations might include the targeting of the state of Israel, conceived as a Jewish collectivity. However, criticisms of Israel similar to those levelled against any other country cannot be regarded as antisemitic. Antisemitism frequently charges Jews with conspiring to harm humanity, and it is often used to blame Jews for “why things go wrong.” It is expressed in speech, writing, visual forms and action, and employs sinister stereotypes and negative character traits.

Contemporary examples of antisemitism in public life, the media, schools, the workplace, and in the religious sphere could, taking into account the overall context, include, but are not limited to: 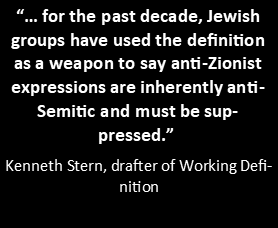