We expect that all citizens in democratic societies have equal rights and opportunities, regardless of one’s ethnicity and religion. However, this is not the case for the 1.6 million Palestinian citizens of Israel who are 20% of Israel’s population.

Israeli leaders claim that as a democracy its citizens are given equal treatment. However, Palestinians have never been treated equally. Up until 1966 Palestinian citizens of Israel were subjected to military rule which allowed Israel to confiscate Palestinian land, restrict their movement, as well as suppress political activity.

Institutionalised and systematic marginalisation and discrimination embodied in over 65 laws of Israel have made Palestinian citizens of Israel second-class citizens. These laws infringe upon all aspects of Palestinians’ lives including their legal, political, social, cultural, religious and economic rights.

During 1947-48 up to 750,000 Palestinians were expelled from their homes, reducing the numbers of non-Jewish people who were inside the State of Israel.

However 150,000 Palestinians remained (many of whom were internally displaced) effectively becoming citizens of this newly formed state as a minority group.

We all have a fundamental right to choose how we are identified. Yet, the Israeli government and media choose not to refer to the Palestinian citizens of Israel as ‘Palestinians’, but rather labels them as ‘Arab Israelis’.

This denies recognition of Palestinian identity, preventing legitimisation of this national identity and Palestinians’ historical claims to their lands.

Palestinians also face discrimination in housing. Israeli authorities primarily invest in non-Palestinian neighbourhoods, resulting in housing shortages. Adalah, the Legal Center for Arab Minority Rights in Israel, says that: The housing shortage in Arab localities in Israel… is the product of a systematic and deliberate policy carried out by the state since 1948 that has viewed Palestinian citizens of Israel as enemies and aliens, while the state pursues its agenda to ‘Judaize’ all parts of the country.

Israel’s denial of Palestinian existence is legalised in the 2018 Nation-State law. This discriminatory law:

Israel’s adoption of ‘The Absentee’s Property Law’ (1950) defined Palestinian refugees who fled the widespread armed violence in 1947 as ‘absentees’, and thus granted the newly formed Israeli state the right to confiscate their properties. Many of these Palestinians did not leave Israel, yet they were barred from returning to their homes. Jewish communities were then built on their confiscated lands.

To this day, land confiscation, expropriation and the demolition of Palestinian homes takes place not only in the West Bank, but also in Israel itself, as the Israeli state prioritises development of Jewish communities.

Israeli authorities often deny Palestinians permits required to construct, extend, repair or rebuild their homes. Building without a permit can result in a person’s home being demolished.

Israel also has not recognised many Palestinian villages, which results in them being excluded from the planning of essential services, and often leaves the whole village at threat of demolition.

The example of Umm Al-Hiran

Umm al-Hiran is a Palestinian-Bedouin village in the Negev region of Israel.  In 2015 it had about 1000 residents.

The village was established in 1956 after Israel refused the villagers a request to return to their original lands where a Kibbutz had been established.

Israel did not recognise this village, and in 2001 the Israeli Land Office identified the residents as a ‘special obstacle’ to establishing new Jewish villages in the region.

Israeli authorities sought orders to demolish the village. These were contested in Israeli court for many years, but in the end the orders were granted.

In 2017 during a pre-dawn demolition operation, a villager was shot and killed by Israeli forces.

Faced with forced eviction, in 2018, the villagers were coerced to sign an agreement to be relocated to the town of Hura.

The State of Israel’s ‘Law of Return’ (1950) gives the right to any Jewish person to migrate to Israel and become an Israeli citizen. By contrast, hundreds of thousands of Palestinians who were expelled from their homeland are denied the ‘right of return’, despite their legal right to do so under international law (UN General Assembly Resolution 194). A purpose of Israel’s policy is to ensure the majority-Jewish demography of Israel.

According to the ‘Citizenship and Entry Law’ (2003), Palestinian spouses (from the Occupied Territories) of Israeli citizens are forbidden to live with their partner in Israel.

Amnesty International identifies this as “a law that disproportionately affects Palestinian citizens of Israel”.  As Adalah notes, “thousands of Palestinian families have been affected by the law, forced to split apart, move abroad or live in Israel in fear of constant deportation”, representing “one of the most extreme measures in a series of governmental actions aimed at undermining the rights of Palestinian citizens of Israel”.

The ‘Nakba Law’ (2011) removes state funding to public institutions that commemorate the nakba, that is, the dispossession and mass expulsion of Palestinians from their homeland in 1947. This clearly violates Palestinian cultural and political rights and their freedom of expression as citizens of an alleged democratic state. This law also silences Palestinian historical narratives and historical connections to the lands. 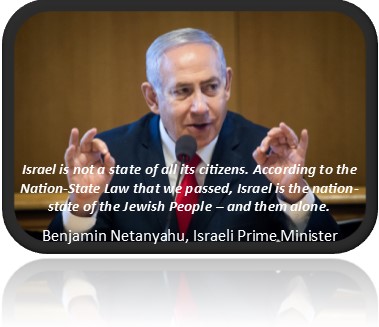 Women of Um al-Hiran at their demolished homes in 2017