Over the nine days, journalists met with a range of local journalists; humanitarian and human rights organisations; parliamentarians and officials.

The group also visited a military court, witnessed the aftermath of a home demolition (pictured),  toured through Hebron’s old city as well as Bethlehem, Nazareth and Jerusalem. More than 20% of Australian federal parliamentarians signed a statement calling for Israel to end abuse of Palestinian children by its military.

The statement was covered in international news.

Maria Vamvakinou MP moved a motion in Parliament calling on the Australian Government to raise concerns with the Israeli Government about the treatment of Palestinian children.  There were speeches in support of this motion made by:

Speeches were also delivered by Senator Anne Urquhart (Labor) in the Senate; and by Andrew Broad MP (Nationals) talking about his trip to Palestine. Many hundreds of Palestinians joyfully participated in this momentous occasion APAN hosted Professor Dugard in Canberra while he was in Australia to deliver the Edward Said Memorial lecture.

Professor John Dugard is a renowned international law specialist, and served as the UN Special Rapporteur for Palestine.

In the lead up to the federal election, APAN’s campaign enabled people around the country to contact their local candidates asking them to commit to supporting Palestine.  Emails were sent out from 90% of electorates, with 127 candidates responding to constituents.    APAN also distributed bumper stickers “I support Palestine and I vote”.

APAN hosted pre-election forum in the marginal seat of Melbourne (Green/Labor contest) that was attended by over 100 people.  APAN also supported people around the country to ask questions in their local candidate forums.

APAN collated a list of the candidate responses, and promoted a star rating to each party based on their responses.

APAN also undertook intensive parliamentary lobbying both before and after the election with seven visits to parliament, meeting with dozens of new and existing parliamentarians. 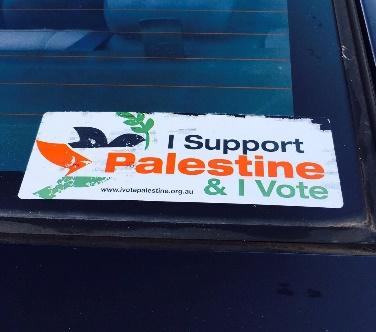