Palestinians aspire to live in peace and freedom enjoying justice and equal rights. Palestinians desire what we in Australia take for granted.

Who are the Palestinians?

Palestinians have lived in the land west of the Jordan River for thousands of years. Up until the rise of Zionism in the late nineteenth century, Muslim, Christian, and Jewish Palestinians lived together as one community, largely at peace.

Today no matter where Palestinians live, they share two things in common – their deep connection to their land and their culture.

In the West Bank, Palestinian families and communities have lived under Israeli military occupation for over 50 years. All aspects of their lives are controlled by Israel: movement is restricted; building permits denied; access to land and water, and trade with other countries severely limited.

The Gaza Strip has been under a permanent state of siege since 2007. Goods can’t get in or out – food, medicines and other necessities are restricted. The health system is crumbling from damage to hospitals by the Israeli military and a lack of drugs and equipment. Severe electricity shortages impact on all aspects of life. Sewage is untreated, 90% of water is unsafe to drink, more than half the population is unemployed – all as a direct result of the blockade imposed by Israel and Egypt.

The birth of Israel resulted in more than 700,000 Palestinians being forcibly removed from their homes and lands to become internally displaced or refugees in neighbouring countries. What the Palestinians know as the Nakba – or the catastrophe.

To this day they and their families live under the UN refugee charter and resolutions and have the right to return to their homes.

Many of these refugees are in the West Bank and Gaza, are stateless in neighbouring countries or spread throughout the world as the Palestinian diaspora. Palestinians make up 21% of the global refugee population (as of 12/18).

20% of the population of Israel are Palestinians. Most of these people were internally displaced
in 1948, and have been unable to return to their homes. Palestinians in Israel live as second class citizens with over 65 basic laws discriminating against them and in favour of Israeli Jews.

Israel passed the Nation State Law in 2018 which legalises apartheid inside Israel.

What can the Australian Government do?

What can you do? 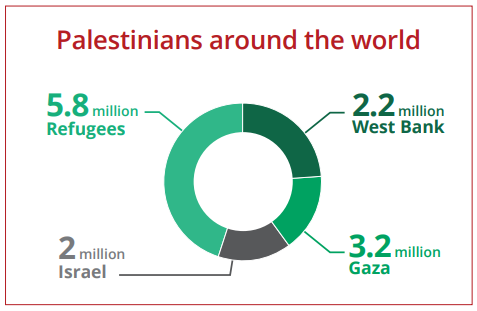 The settlements I saw here [in the West Bank] reminded me of what we had suffered in South Africa because we also were surrounded by many settlements and were not allowed to move from one place to another freely. Palestinians are being subjected to the worst version of apartheid. Israel is not a state of all its citizens. According to the basic nationality law we passed, Israel is the nation state of the Jewish people – and only it.