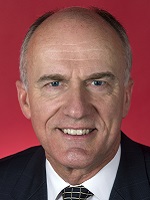 Questioned SBS coverage of an attack on an Israeli police officer.

I make reference to the SBS World News report of 17 June 2017 about the fatal attack on an Israeli policewoman by Palestinian attackers. Is it agreed SBS found the report to have breached its own code for accuracy and impartiality?

Senator ABETZ: Thank you, Chair. I have a brief bracket of questions, given the time. I make reference to the SBS World News report of 17 June 2017 about the fatal attack on an Israeli policewoman by Palestinian attackers. Is it agreed SBS found the report to have breached its own code for accuracy and impartiality?

Mr Ebeid : I recall something about it, but I don’t have the details, Senator. I’m happy to take that on notice and check. I think there was a complaint, and I just don’t remember what the outcome of that complaint was, because it was a couple of months ago now.

Senator ABETZ: Is a Ms Begbie with us or not?

Senator ABETZ: She is the signatory to the letter that I have.

Senator ABETZ: Take it from me that the letter she signed said:

The report did not state that one of the police victims, female officer Hadas Malka, had died as a result of the attack. The fact was available prior to broadcast and should have been included in the SBS report.

Mr Ebeid : Ms Begbie is very thorough—so you’ve got the answer in front of you?

Senator ABETZ: You’d be gracious enough to accept that, thank you. The letter continues to say that the report could have left the average viewer with an unfair impression of the incident. Then, over the page, we are told;

SBS apologises for this breach … As a result of this breach the Director of News and Current Affairs, Jim Carroll—

… has reminded his staff of the need for fact checking and fairness in reporting.

Was that just a general spammed-out email to all staff that they should be fact-checking and fair in their reporting?

Mr Ebeid : Knowing how accurate Mr Carroll is with these things, I suspect it was both. It would’ve been a discussion with the people who put that report together and then a general reminder to the newsroom. I suspect he would have done both, but I’m more than happy to take it on notice to tell you what he did, but we take those things very seriously.

Senator ABETZ: If you could take on notice—if you are able to provide me with a copy of the general notice that went out in reference to this comment in the letter—

Senator ABETZ: ‘reminded his staff of the need for fact checking and fairness in reporting,’ how that was communicated and, if it was in written form, if we could have a copy of it. Can I then ask specifically, in relation to the journalist involved, was any—take this on notice, please—specific counselling or other advice offered to this journalist; and were there any specific consequences for that journalist? Then: was there any correcting broadcast?

Mr Ebeid : There probably would have been, if a letter like that went out, I’m pretty sure, but, again, I’ll take that on notice.

Senator ABETZ: Please take that on notice. If there was, can you let us know when it was run and how often? If there wasn’t a correcting broadcast, why not, because the viewing public would have been left with—to quote the letter from SBS—’an unfair impression of the incident’?

Mr Ebeid : As you can see from that letter, we are very transparent. When we get it wrong like that, we certainly tell the complainant we did so, and I recall from that complaint we received a very gracious letter from the complainant thanking us for the thorough response that we had. I feel proud that we have an ombudsman that is impartial like that and takes those matters seriously.

Senator ABETZ: It’d just be good if your fellow public broadcaster were able to follow suit in relation to some of these matters. If I could then simply ask you to follow up on those questions on notice—

Senator ABETZ: to ensure that the viewing public do not continue to be left with an inaccurate, partial or non-impartial a story.