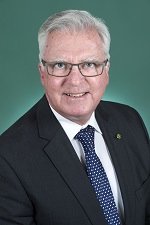 I call on the government to work with the UNHCR to process registrations of Palestinians fleeing Syria, so that they can at least be entitled to apply to the Australian government for the possibility of being resettled as part of the additional 12,000 refugee places being earmarked for Syrian refugees.

Mr HAYES (Fowler—Chief Opposition Whip) (11:11): Over the past four years, the civil war in Syria has resulted in the worst humanitarian crisis since the Second World War. Over five million people, including Christian minorities, Yazidis and Kurds in addition to many millions of Muslims, have sought refuge in neighbouring countries.

Amongst these minorities are Palestinian refugees who have fled the suffering and widespread human rights violations, war crimes and crimes against humanity. Sadly, they seem to be falling through the cracks as the United Nations High Commissioner for Refugees protection program does not appear to extend to them.

When the hostilities of the Arab and Israeli conflict started in 1948, more than 700,000 Palestinian civilians became displaced. Many sought refuge in camps in West Bank, Gaza, Jordan, Lebanon and Syria. At that time, the United Nations Relief and Works Agency—UNRWA—was established by the United Nations to carry out direct relief work and works programs for Palestinian refugees in these regions. Unfortunately in 1967, the Palestinians were once again forced into exile as a result of the conflicts on the West Bank and the Gaza Strip.

More than 500,000 Palestinian refugees migrated to Syria, with the biggest proportion now in the Yarmouk Camp in Damascus. However, given the conflict and upheavals that are continuing to plague the region, approximately 270,000 Palestinian refugees have been internally displaced by the Syrian conflict. According to reports by Amnesty International, more than 50,000 are reported to have fled to Lebanon; 11,000 to Jordan; 6,000 to Egypt; 1,000 to Libya; 1,000 to Gaza; and others to Turkey and other countries.

The UNRWA continues to contribute to the welfare and human development of these displaced Palestinian refugees through the provision of education, health care and social services. As of August this year, it is reported that there are 570,000 Palestinian refugees registered with the UNRWA in the Middle East.

Since the 1950s, the United Nations High Commission for Refugees, UNHCR, has provided international assistance and protection, and sought permanent and durable solutions for refugees fleeing war-torn communities. Following the Syrian crisis, UNHCR has registered over five million refugees and has assisted many for resettlement to other countries, including Australia. I would also note Australia’s intake program now of an extra 12,000 from that region. Whilst not a requirement of the UNHCR registration process to determine factors for the Australian Department of Immigration and Border Protection, consideration of UNHCR application nevertheless makes a significant contribution.

However, unlike other Syrian refugees, Palestinian refugees are being denied registration by the UNHCR because the Palestinians are already under the mandate of UNWRA. This is despite the fact that UNWRA’s services are only for relief, education and health care, and have no involvement in processing refugees for resettlement. Since 2013, UNWRA has been struggling with its ability to provide for Palestinian refugees due to severe financial and resource restraints. This has left more than half of the Palestinian refugees in the Middle East without access to schools, hospitals and even secure shelter.

Under the 1951 Refugee Convention, UNHCR has a mandate to provide international protection to refugees worldwide, which should include Palestinians, who are fleeing from the very same violence as other refugees exiting Syria at the moment. Palestinian refugees are a vulnerable group, have been subjected to flagrant human rights violations and have experienced the same conditions as everybody else that is fleeing the violence in the Syrian conflict at the moment. Therefore, I call on the government to work with the UNHCR to process registrations of Palestinians fleeing Syria, so that they can at least be entitled to apply to the Australian government for the possibility of being resettled as part of the additional 12,000 refugee places being earmarked for Syrian refugees.