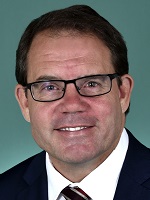 Back in Australia, Bob at the ACTU and then through the International Labour Organization quickly became involved in international issues, becoming a strong supporter of Israel. Bob advocated for Russian Jews who were being denied permission to emigrate to Israel and led a strong union campaign of opposition to the South African Springboks tour of Australia.

Mr GOSLING (Solomon) (16:17): As many other speakers have said, Bob Hawke was a great Australian. He understood the Australian people, and the Australian people loved him for that. He was one of us. He could relate to anyone. But, as well as being a fine Australian and one of us, he was a great internationalist. He was a confident and respected advocate for Australia and championed Australia being an influential middle power in international forums. One of his earliest motivations for joining the Labor club at UWA, the University of Western Australia, was his interest in Labor’s and Arthur Calwell’s immigration policies. This led him to form an international club at the uni. He also saw the immigration policy as good economic policy as well as being good values based humanitarian policy.

Bob’s father, Clem, was a Congregational minister, and Bob loved Clem. Often—and in my case it’s the same—we take our religious beliefs, our values, from our parents, and I’m sure that that was the case with Bob. He was active in the student Christian movement and the Congregational Youth Fellowship. I understand from my research that Bob was actually impressed with some aspects of the Catholic faith, but he never pursued that. But he did head off to India for the World Conference of Christian Youth, and he was shocked by the huge gap between rich and poor and also the apparent indifference of some of the conference delegates to those people in dire poverty around them.

As a Rhodes scholar at Oxford he met bright young people from all around the world. I congratulate the government on establishing the Bob Hawke scholarship for the education of bright young Australians at fine overseas institutions. I think it’s important.

Back in Australia, Bob at the ACTU and then through the International Labour Organization quickly became involved in international issues, becoming a strong supporter of Israel. Bob advocated for Russian Jews who were being denied permission to emigrate to Israel and led a strong union campaign of opposition to the South African Springboks tour of Australia. This was a significant shift in international opposition to apartheid in South Africa, which Bob continued as Prime Minister, and which led to mutual respect and friendship with Nelson Mandela. Bob was solid on the US alliance. Western Australian Governor Kim Beazley pointed me to Bob’s autobiography where, in part, he said:

I was a vocal opponent of the war and of US policy in Vietnam but my attitude towards America remained positive. To me, the overriding importance of Australia’s US alliance was clear. The United States, whatever its mistakes, was the bulwark of the free world.

Bob also foresaw the rise of Asia and of China and he understood that coming rise better than most. After the massacre at Tiananmen Square Bob, as Prime Minister, invited Chinese students in Australia to stay on if they wanted to. These people, these Chinese citizens who stayed in Australia proved to be an enormous asset to Australia. Bob’s act of leadership demonstrated his commitment to a multicultural Australia. I won’t go into them much, but we’ve heard much about the reforms of the education sector that meant more high school graduates and more university graduates.

The Hawke government’s reform of the Australian economy, particularly the floating of the dollar, transformed us into a globally competitive trading nation. Bob was a great Prime Minister and a great Australian leader, as demonstrated by his actions both at home and abroad. He made us a more confident and outward looking nation. My earliest memory of Bob was when we won the America’s Cup in 1983. I had just turned 12 years old. I remember it being early morning, and we were watching the victorious crew of Australia II and our Prime Minister. I remember bounding out of our house to catch the school bus, and I was so proud. I can remember my heart being so full of pride, seeing that crew and our Prime Minister. I remember thinking, ‘Australians can do anything,’ and I remember thinking to myself by extension as a young lad growing up in a country town—not in the city, not from a privileged family—that I could do anything. That was the feeling he gave me. I’ll never forget how that made me feel.

I want to acknowledge Bob’s love of the Territory as well. I’ve received many messages from people in Darwin and Palmerston, my electorate, and from Territorians elsewhere about how much they loved Bob. We’ve heard something from my friend and fellow Territorian the member for Lingiari and others about the handing back of Uluru to its traditional owners and how important that was, about the extension of the protections of Kakadu and, of course, about when Bob received the Barunga Statement.

My friend Father Frank Brennan reminded me today that it was in August 1988 in this place that Prime Minister Bob Hawke proposed that the first item of substantive business in this new Parliament House would be around reconciliation with First Nations people. The idea for the motion arose when the heads of Australian churches issued a statement titled ‘Towards reconciliation in Australian society’ at the beginning of the year of the bicentenary. For the record, this was the motion:

(a) Australia was occupied by Aborigines and Torres Strait Islanders who had settled for thousands of years before British settlement at Sydney Cove on 26 January 1788;

(b) Aborigines and Torres Strait Islanders suffered dispossession and dispersal upon acquisition of their traditional lands by the British Crown; and

(c) Aborigines and Torres Strait Islanders were denied full citizenship rights of the Commonwealth of Australia prior to the 1967 Referendum;

(a) the importance of Aboriginal and Torres Strait Islander culture and heritage; and

(b) the entitlement of Aborigines and Torres Strait Islanders to self-management and self-determination subject to the Constitution and the laws of the Commonwealth of Australia; and

(3) considers it desirable that the Commonwealth further promote reconciliation with Aboriginal and Torres Strait Islander citizens providing recognition of their special place in the Commonwealth of Australia.

Bob remained committed, and I saw that commitment just in recent times in the Northern Territory. The Barunga Statement always stayed with him. In fact, he gave his resignation speech from the prime ministership in front of the Barunga Statement in this building.

My most recent memory of Bob was a simple interaction when we travelled to Arnhem Land for the Garma Festival, hosted by the Yolngu people, where he was continuing to promote reconciliation. We were going through the airport in Nhulunbuy—or Gove as some people might know the town—in Arnhem Land, and when he went through the security screening Bob was pulled up by security for having two cigarette lighters in his pocket. Only one cigarette lighter was allowed per person and he was asked by security to surrender one. Bob didn’t make too much fuss about this, but I could see that he was slightly frustrated. I leaned in and said, ‘Bob, I’d be honoured to receive one of your lighters.’ He simply turned to me, smiled and said, ‘Thanks mate.’ And I said, ‘No, thank you, Bob.’ He smiled with that twinkle in his eye and I was a 12-year-old kid again. It was like when I bounded out of our house after seeing our Prime Minister with the America’s Cup. Bob looked at me and said, ‘Thanks mate,’ and I just felt really special.

And I guess that was Bob’s wonderful gift to Australians—he made all of us feel so special and so proud. Vale, Bob Hawke. My condolences to all who loved him so much.