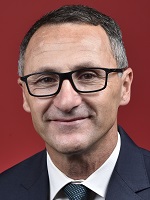 This Morrison government decision to relocate the Australian embassy to Jerusalem is a disgrace. This is a government that seems hell-bent on ruining Australia’s international reputation by cynically lining up behind a dangerous and unstable US President to destroy any prospect of a just peace between Israel and Palestine…

Senator DI NATALE (Victoria—Leader of the Australian Greens) (15:29): I move:

That the Senate take note of an answer given by the Minister for Foreign Affairs (Senator Payne) to a question without notice asked by Senator Di Natale today relating to the Australian Embassy in Israel.

This Morrison government decision to relocate the Australian embassy to Jerusalem is a disgrace. This is a government that seems hell-bent on ruining Australia’s international reputation by cynically lining up behind a dangerous and unstable US President to destroy any prospect of a just peace between Israel and Palestine and, of course, sacrificing our relationship with our friends and neighbours, such as Indonesia. The announcement regarding Jerusalem is nothing more than a craven attempt to effectively play a set piece from the Donald Trump foreign policy manual. It’s about creating a big stir with a controversial statement. It plays to your base. It advances the politics of fear and division and is done with an eye on the Wentworth by-election, which is around the corner. But I have a great faith that many of the Jewish voters in Wentworth don’t share the Prime Minister’s views on Jerusalem and the uranium nuclear deal and they don’t share it for a variety of reasons.

Let’s consider what types of policies and behaviour the Morrison government’s announcement is now rewarding. Just a few months ago, the Israeli government passed the nation-state Basic Law, which states that Israel is the nation state of the Jewish people and that the realisation of national self-determination in the state of Israel will be exclusively for the Jewish people. It announces that greater and united Jerusalem is the capital of Israel and that Arabic loses its status as an official language. And, of course, it confirms that Jewish settlements will continue. Settlements in occupied East Jerusalem and the West Bank are illegal under international law. Almost 600,000 Jewish Israelis now live illegally in the West Bank. In August, Israel approved plans for more than 1,000 settlements, 96 per cent of which are isolated settlements that Israel would likely need to evacuate within a two-state agreement. Let me reiterate: building these settlements is a flagrant violation of international law. It’s illegal. The UN Security Council once again confirmed the illegality of the settlements. How can Palestinians trust that the Israeli government is serious about peace talks when it keeps taking more land and when it deliberately creates, on the ground, a pre-emptive territorial claim?

Settlements make life extremely difficult for ordinary Palestinians, through checkpoints and settler-only roads. They increase the incidence of demolition of homes and communities in Palestine. This is the sort of behaviour that the Australian government is rewarding with its announcement today. If we really wanted to salvage the possibility of a two-state solution, we would recognise Palestine. We wouldn’t pander to Donald Trump and, indeed, to Mr Netanyahu. Recognising a Palestinian state reaffirms the fact that the occupation is illegal. It shows that there are alternatives to armed resistance, and it could represent an important step in unblocking negotiations. It demonstrates that the international community will not let the current reality continue. Once again, I say: shame on you, Mr Morrison, for again giving in to the extreme right of your party and undermining international peace efforts in false pursuit of an electoral outcome on the weekend.