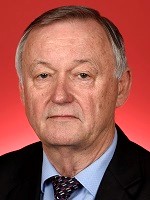 Questioned the topics discussed during a meeting between the Australian and Palestinian Foreign Ministers.

Mr Varghese : That was a useful meeting to survey the range of issues in the Middle East region. They spoke about the peace process and where that stood and what the prospects were. They spoke also about what was happening in relation to the threat from Daesh, and they spoke about Iran, and what you would expect when a Middle East foreign minister meets with an Australian foreign minister.