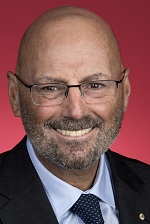 By the government’s action we have given our vote—in effect, our consent—to what Hamas has done.

Senator SINODINOS (New South Wales) (15:11): Today the opposition again extended the hand of bipartisanship on both issues, Israel and the National Disability Insurance Scheme, raised by this motion and, again, that hand was turned away arrogantly, dismissively.

Senator SINODINOS: Seriously. The politics of this is very straightforward if we talk first about the National Disability Insurance Scheme. How do you lock in your opposition to a process? You lock them in by having them be part of the process. The opposition was offering to be locked in with the government in a bipartisan committee that would oversee this. Everybody would be on the same page, speaking the same language and on the same wavelength. The government has nothing to lose from offering the hand of bipartisanship, nothing at all. Politics 101 teaches you that when you offer the hand of bipartisanship, it is almost always to the benefit of the government of the day; yet this government is so incompetent it cannot even see what is in its own interest.

So why do we offer the hand of bipartisanship? Because Tony Abbott took a leadership position on the National Disability Insurance Scheme and the government was forced to respond, as it did in the budget context. But it was dragged, kicking and screaming. It offered $1 billion over the forward estimates, not the $3.9 billion requested, evaluated and recommended by the Productivity Commission. We now wait for the budget to see what funding is put in for the out years, because the sacred promise that Julia Gillard has made to all of those disabled people out there is that the money will be there, that there will be a ramp up of $7 billion or $8 billion on top of what we do already by 2017 or 2018. Those people are waiting. They take it seriously. It is not just a political headline to them. So why treat them with such contempt? Why raise their expectations only to dash them?

In relation to Israel, I will say only this: the events of the last 24 hours confirm that the judgement of Julia Gillard has once again been trashed by her own colleagues. The Prime Minister took a principled view on this, to give her her due. She, as Prime Minister, made a judgement and, as the principal foreign policy spokesman of the government—the person who recently has been doing most on the foreign affairs trail, if you like, representing the government abroad—she took a view, and her colleagues rounded on her. Senator Bob Carr, the Minister for Foreign Affairs, led the charge against the Prime Minister.

I do not ascribe leadership aspirations to Senator Carr but his behaviour was not that of a foreign minister, loyal to the Prime Minister, backing up her judgement. He took on her judgement. They have been emboldened within the Labor Party by the events of the last 48 hours, in which the Prime Minister’s judgement has been rendered under such a cloud by the events in Melbourne of almost two decades ago which have, once again, reminded people that Julia Gillard’s judgement cannot be trusted.

But on the issue of Israel there is a bond of bipartisanship between the Prime Minister and the opposition. The only people not in the cart are the Labor Party. The excuse that was given was that it might upset people in Western Sydney—that is, it is about votes. It is about Chris Bowen’s seat of McMahon and about Tony Burke’s seat of Watson. We were told that it might offend some of our trading partners in the Asia-Pacific and that it might offend people in the live sheep trade or the live cattle trade. Well, we offended them when we unilaterally revoked the trade, when we took away the capacity for Australians to trade with the region. That is what we should have dealt with. You do not trade your foreign policy for your trade policy. You take a principled view.

What are we getting in return from the Palestinians, who will be the beneficiaries of our abstention? Have they given any further commitments on going to the peace table? At least Britain is trying to get something out of the Palestinians in terms of if they get observer status at the United Nations they will not join the International Criminal Court and then try to take Israel to that court to charge them with crimes against humanity. At least the Brits are trying to get something in return. By the government’s action we have given our vote—in effect, our consent—to what Hamas has done.

The DEPUTY PRESIDENT: Thank you, Senator Sinodinos. Before I call the next speaker, it was my error for not bringing you to order earlier in your debate. I let it go and it complicated matters. Please refer to members of the other house and, in particular, office bearers, by their correct title, not just by their names alone. I remind all senators of that for the continuation of this debate.