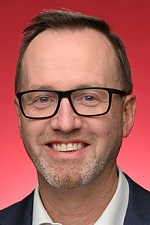 Senator SHOEBRIDGE (New South Wales) (12:35): I’ve seen the video of Sydney icon Danny Lim and the police violence he was subjected to yesterday, and it is genuinely shocking. Danny, a 78-year-old peaceful man, was tackled by two police officers in public and had his face smashed into the ground. He can be heard in the video calling out for help. This was in the centre of Sydney. The last update we’ve received is that he has a fractured skull and bleeding on the brain. He is still in hospital as I speak now. Our thoughts are with him. Danny, if you’re hearing us, we wish you a speedy recovery.

Danny was wearing his signature sandwich board, which has a misspelled four-letter word on it—one I won’t say in this place, but one that is definitely not as offensive as the brutality he was subjected to yesterday. It’s the same word that was on a sandwich board in 2019 when the police arrested and took Danny to court. That case was thrown out, with the magistrate saying the arrest was heavy-handed and unwarranted and that the sign was cheeky but not offensive. He was smashed to the ground yesterday for a cheeky sign. It seems they’ve learnt nothing.

‘Don’t worry,’ say the New South Wales police, ‘There is now an independent review happening of yesterday’s assault.’ We’re still worried, because it’s not independent. We know it will be police investigating police, and that only works for police. There are never any consequences for violent officers, and nothing seems to change. It’s not just a few bad apples and it’s not just one police force. It is a pattern of violent, racist policing where there are no consequences. In WA a report just this week shows that 61 per cent of the people attacked by police dogs—and some were kids—were First Nations people. In Queensland another scathing report shows in horrific detail the deeply racist and sexist actions of many serving police in that state, but not a single police officer has been fired or faced serious sanction.

There aren’t any other jobs I can think of where you can violently assault an elderly man—wrongfully and brutally—and be sure to keep your job. Police forces don’t just need more training; they need a root-and-branch overhaul and a system of oversight with real consequences for bad behaviour. At a time when integrity and transparency are the flavours of the day it’s time to apply exactly those standards to all police in this country.

The Four Corners expose of Australia’s youth detention centres is a national shame and a reminder of institutional abuse in our criminal justice system, a system that seems to condone the routine violation of human rights. Children in jail are our most vulnerable, most neglected and most marginalised children. In the first half of this year there have been 285 instances of self-harm and 20 attempts at suicide at the Banksia Hill Detention Centre alone. Just pause on that for a moment. That’s just one child jail. We all remember 2016 when news broke about the appalling violence in Don Dale. As a nation we vowed to shut it down and stop abusing children like that and yet here we stand, six years later, and it’s still open for business.

Instead of supporting and funding child prisons that repeat and aggravate the cycle of misconduct and reoffending we need to turn those billions of wasted dollars towards supporting kids, not jailing kids; rehabilitation; and recovery. We must not look away from these disturbing reports and disturbing statistics and simply allow business as usual to continue.

Australia continues to perpetuate its tragic and shameful past of invasion and colonisation through this systemically racist criminal justice system. We know it targets poor kids and First Nations kids, some as young as 10 years old. These are systems of institutionalised abuse that incarcerate children, breed intergenerational trauma and will take us backwards. It’s not time for more reports or for more recommendations; it’s time to take the only action that really matters. It’s time to close all children’s prisons in Australia. I want to thank Nirvana for these words and thoughts!

When it comes to cybersecurity, Medibank must be breathing a sigh of relief this week as it looks at the government’s empty promises while millions of Australians are reeling from their sensitive information being compromised and shared. There’s a new penalty regime proposed by the Albanese government for privacy breaches after the Optus, Medibank, Woolworths and Vinomofo breaches—the list goes on. There was probably another one this morning. After those hacks, that new proposed penalty regime will see businesses facing fines of up to $50 million for privacy breaches. Or if the company benefited, they can be fined up to 30 per cent of their annual turnover. That sounds great.

However, after we heard from the Office of the Australian Information Commissioner in the privacy inquiry last week, we know that that office does not have the funds to prosecute these companies, even with the new super penalty on the statute books. The Office of the Australian Information Commissioner has an annual budget of just over $30 million. With that, it’s got to fulfil multiple roles—FOI, privacy, regulator—and we know that it’ll cost $5½ million just to investigate Optus. And yet the OIC has more than 2,000 FOI reviews that are delayed a year or longer, some for as long as four years. That’s because of their lack of resources.

The $50 million fine is not much use if the regulator lacks the funding to undertake the investigation and prosecution of any more than one serious case at a time. The OIC’s excessive workload and lack of funding risks the failure of the fines to act as a deterrent. And Medibank will know this, Woolworths will know this and the next major corporate will know this. Without the investment needed in the OIC, these fines are little more than a headline. There is a real danger that corporate Australia will see the new fines and the inability of the regulator to bring a prosecution, and just shrug their shoulders. We need joined-up policy and public interest law reform that’s matched with the funding to make it work. That’s how we keep our data safe. I want to thank Sally for pulling that piece together.

How long will Palestinians be forced to wait for the most basic of rights—for freedom and for peace with justice? For decades now, Australia has been telling Palestinians to negotiate with Israel and to be a partner for peace. Let’s take a moment to reflect on who the Palestinians have been asked to negotiate with now. Israel has just elected its most far-right government in history, and that’s saying something. Australia’s foreign minister has said that Australia’s position as a friend of Israel will not be affected by the inclusion of far-right parties in the new Netanyahu led government.

So who are our new friends? Israeli Prime Minister-designate Benjamin Netanyahu will form government with parties of the far right, the Religious Zionist alliance, which now form the third-largest bloc in the Knesset. They’re explicitly anti-Palestinian, explicitly anti-LGBTQI rights and ultraconservative. And Jewish party power leader, Itamar Ben-Gvir, who wants to be police minister, was convicted in 2007 for supporting a terror organisation and inciting racism. He said he wants to legislate to strip citizenship from, ‘Anyone working against Israel from within Israel’. He recently attended a memorial for the late far-right movement leader Meir Kahane, whose violent anti-Arab ideology included calls to ban Jewish-Arab intermarriage and for the further mass expulsion of Palestinians. Kahane was considered so offensive that Israel banned his party from running for the Knesset and the US, amongst other countries, listed it as a terrorism group. The Religious Zionist Party leader, Bezalel Smotrich, also has a history of racism and has said the murder of a Palestinian family by Israeli settlers was not terrorism.

Netanyahu has actively worked to ensure these figures are elected, and these extreme elements are likely to be given senior government positions in the new Israeli government. This is all led by Netanyahu, who himself has said that there will be ‘no Palestinian state under his watch’. We only need to look to his record of aggressive settlement expansion to know that on this point, at least, he is speaking the truth.

Make no mistake: illegal Israeli settlements in the occupied West Bank have grown under every single Israeli government for the past half century, despite consistent international opposition. There are now roughly three-quarters of a million Israeli settlers living illegally on occupied Palestinian territory. And 2022 is also on course to be the deadliest year for Palestinians in the occupied West Bank on record, and that’s before this frightening new government has even taken office.

The rise of the far right in Israel heralds an even more terrifying and dangerous time for Palestinians. So why is the Albanese government behaving like it’s business as usual? This is the time for Prime Minister Albanese and foreign minister Penny Wong to explicitly call out an extremist Israeli government. That’s the least we could expect from a party and a government that goes on the record and says it wants to be a friend of Palestinians and a friend of peace, justice and freedom. Well, who are they really friends of?