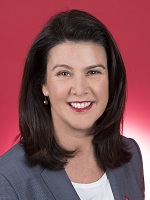 When we talk about things like the Israel-Palestine relationship, you can see the whites of their eyes. They don’t know where they stand on Israel and Palestine.

Senator HUME (Victoria—Deputy Government Whip in the Senate) (16:16): I rise today to speak on the matter of public importance introduced to this place by our very dear friend from the Australian Labor Party Senator Doug Cameron—always cheerful, always merry; ‘Senator Bagpipes’; a happy chap. It was beautifully followed by his dear friend Senator Gallacher, who again is a very cheerful man. I actually didn’t realise that Labor could waste taxpayer money while in opposition, but I’m absolutely certain that I heard exactly the same speech in take note of answers only half an hour ago. That’s quite extraordinary. The taxpayers already paid once today for that drivel that we heard from Senator Gallacher, so that is quite an extraordinary achievement. I think you should be very, very proud indeed!

If you want a party that really cares about governing for all Australians, you can look over here; if you want to see a party that doesn’t care a jot about ordinary Australians, all you need to do is look over there to the opposition benches. On this side of the chamber, it’s quite clear we have a plan that’s working for all Australians. We are making Australia strong. The government’s policies are working. The economy is growing at 3.4 per cent. That is the strongest growth since the height of the mining boom. It’s growing at a stronger rate than the world’s seven largest advanced economies—the USA, Canada, Germany, France, Italy, the UK and Japan. It’s growing faster than the OECD average.

Have a look at small business tax cuts. We’ve given tax cuts to more than 3.3 million businesses, and further tax relief has been legislated to reduce the rate from 27.5 per cent to 25 per cent for businesses with an annual turnover of less than $50 million. For unincorporated businesses with a turnover of less than $5 million, we’ve introduced a tax discount of eight per cent capped at $1,000 and have legislated a further increase to 16 per cent.

We have fixed the budget—in fact, over $41 billion in budget savings have been delivered since the 2016 election alone. We have halved the growth in spending, which was out of control under the six years of Labor government—out of control. We have halved the growth in spending from four per cent a year under Labor to 1.9 per cent under the coalition. That is the most restrained of any government in more than 50 years. The budget deficit in 2017-18 is projected to be $18.2 billion, which is less than half what it was two years ago, and we are on track for a balanced budget in 2019-20, a year earlier than anticipated.

The outcome that I’m most proud of is the promise that we made in 2013 to deliver one million new jobs to the Australian economy within five years, and we have delivered it in spades. In fact we promised it within two terms of government and we delivered it one year early, within five years, with 1,114,500 more Australians in work since September 2013, and over half of those are in full-time jobs. The vast majority of jobs have gone to women, and, in the last 12 months alone, at least 100,000 have gone to regional Australia. In 2017-18 alone, 349,500 jobs were created. That’s the best financial year result since 2004-05, over a decade ago. Most importantly, of those jobs, over 100,000 went to young Australians. In fact, growth in youth employment is the best that we’ve seen in 30 years. The unemployment rate sits at 5.3 per cent, the lowest level since 2012 and well below the level we inherited from Labor in 2013 at 5.7 per cent.