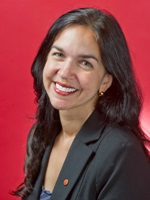 This exhibition featured artwork by Gazan children that was touching and eye-opening. It was about reclaiming childhood in a harsh, harsh world. Some of them, like Farah, whose beautiful images of doves spoke of the peace and calm that people of Gaza long for, had painted about their hopes. Others, like Fatima and Iman, elicited feelings of loss, fear and hopelessness with their paintings of tank tracks and tortured prisoners.

Senator SINGH (Tasmania) (19:41): I rise to share with the Senate an important exhibition, recently held in Hobart, that I had the honour to open, small moments of beauty + truth: Art inspired by the children of Gaza. Small moments of beauty + truth was conceived by the curator Richard Skinner’s simple idea that engaging in the world and committing to change begins with focusing on small, shared moments. This exhibition featured artwork by Gazan children that was touching and eye-opening. It was about reclaiming childhood in a harsh, harsh world. Some of them, like Farah, whose beautiful images of doves spoke of the peace and calm that people of Gaza long for, had painted about their hopes. Others, like Fatima and Iman, elicited feelings of loss, fear and hopelessness with their paintings of tank tracks and tortured prisoners.

The event was supported by artwork donated by local Tasmanian artists which was auctioned to raise funds for the Gaza Children Cinema. The Gaza Children Cinema was established by Ayman Qwaider, who was born and raised in Nuseirat refugee camp, one of eight refugee camps across the Gaza Strip. I had the pleasure to meet Ayman and hear him speak at the exhibition. There he walked us through the life of a Gaza resident about to turn 18. If you are turning 18 this year then you were only seven when the blockade of Gaza began. You’ve spent 11 years suffering for decisions made by others when you were too young to even understand them. You have witnessed multiple wars and bombing campaigns and you have lost family and friends, and this is only a small glimpse into that life; it is something we cannot truly understand.

It was into this world, around the Gaza refugee camps, that, in 2013, Ayman and several of his friends began taking a mobile projector and screen, showing films in open spaces and engaging children in conversations and activities. They were encouraged to draw, play out and share their feelings and experiences. Art, as we know, not only provides a creative and emotional outlet; it also encourages children to create something tangible and long-lasting. For children who struggle to talk about their feelings, art can provide another method of communicating those ideas. The Gaza Children Cinema aims to be a peaceful and creative space where kids can be kids and where the overwhelming realities of siege, loss and war can be temporarily or momentarily forgotten. Children and their families welcomed this venue of refuge and hope in an otherwise dire reality and, in 2017, the volunteers of Gaza Children Cinema held 160 screenings for thousands of children, many of whom were experiencing cinema for the very first time. In June, the NGO Save the Children reported that up to 95 per cent of Gazan young people demonstrated signs of deep psychological distress. For 78 per cent of them, the single biggest source of fear was the sound of warplanes. These children need our help and support in order to heal. That is why I wholeheartedly support Ayman and the Gaza Children Cinema for their exemplary work helping the children of Gaza. In that regard, I urge our Australian government to do everything it can to ensure programs like these get the financial support that they need and that the people of Palestine are not left without help nor hope.

Finally, I would like to thank all of the people in Hobart who joined us at Mawson’s pavilion on the waterfront to support the children of Gaza. And I thank our local artists that participated, particularly those that donated artwork that was then auctioned that evening. Those included Patrick Hall, Di Allison, Dean Chatwin, Irene Briant, Belinda Hall, Julie Gough, Peter Maaseveen, Julie Monro-Alison and Paul Bailey. A special, special thank you to Ayman Qwaider and Samya Jabbour for keeping the Gaza Children Cinema alive. I think through their work we can learn so much about how, with small moments of beauty and truth, we can indeed support the children in Gaza so that they can have a brighter future, a future through cinema that gives them hope and that lifts their spirits in the hope that one day that there will be a peaceful future for them in which to live.