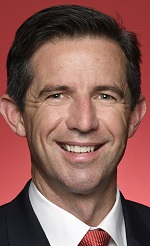 In the context of the government’s decision to reverse the recognition of West Jerusalem as the capital of Israel, Mr Albanese and the Labor Party showed neither courage nor integrity. In fact, it was quite the opposite: Labor’s completely unnecessary decision that Australia will cease to recognise West Jerusalem as the Israeli capital has been a shambolic process.

Senator BIRMINGHAM (South Australia—Leader of the Opposition in the Senate) (16:02): I move:

That, in the opinion of the Senate, the following is a matter of urgency:

The need for the Senate to reaffirm the importance of consultation and careful consideration when dealing with complex and sensitive foreign affairs matters, and the need for Prime Minister Albanese to apologise to Israeli Prime Minister Lapid for the hasty and careless manner in which the decision to no longer recognise West Jerusalem as the capital of Israel was made.

In question time today Senator Wong described the Prime Minister as ‘a man of courage and a man of integrity’. Well, courage entails telling people when you’re going to do things that they might disagree with, that might be unpopular with them and that might have consequences for you in terms of people choosing, in an electoral contest, to vote against you. That would be courage. Integrity, of course, would be being honest, up-front and direct with them.

In the context of the government’s decision to reverse the recognition of West Jerusalem as the capital of Israel, Mr Albanese and the Labor Party showed neither courage nor integrity. In fact, it was quite the opposite: Labor’s completely unnecessary decision that Australia will cease to recognise West Jerusalem as the Israeli capital has been a shambolic process. It has been contemptuous of so many stakeholders and was executed with shocking timing. Firstly, though, the Labor Party and Mr Albanese were deceptive and misleading in this decision-making. Senior Labor members of parliament went to the last election assuring concerned stakeholders, including members of the Australian Jewish community, that, on the question of Israel, it didn’t matter which way they voted at the last election. The now Attorney-General, Mr Dreyfus, wrote an article in Australian Jewish News on 6 March this year attacking Scott Morrison for the suggestion that there was any difference in policies between the two sides; they just said it didn’t matter. Mr Dreyfus claimed that, across domestic politics, Australia, spoke ‘with one voice’. He was echoed by Josh Burns, who did likewise, saying Australia’s Jewish community should feel proud that its interests would be safeguarded irrespective of who forms government.

Mr Dreyfus, Mr Burns and other Labor members and senators who provided those reassurances to Australia’s Jewish community should feel shame, not pride, for misleading the community ahead of the last election. Contrary to their reassurances, the Albanese government has taken not one step but, indeed, multiple steps so far of difference, of change of policy. They did so, in fact, within weeks of their election, when they refused to join 22 other nations, including Canada, Germany, the Netherlands, the UK and the United States, in voting in favour of a key motion put to the UN Human Rights Council. It was a motion simply expressing deep concern at the disproportionate scrutiny placed on Israel from an open-ended commission of inquiry into alleged human rights abuses. This, I note, is the same council that recently declined to even debate a one-off report on serious abuses in the Xinjiang region of China.

The government made the decision to step away from working with like-mindeds and standing for the principle around fairness, equity and scrutiny. They then made this decision to overturn the recognition of West Jerusalem but did so in the most cack-handed and shambolic of ways possible. They misled voters and the community, saying it wasn’t going to happen. Then, when it leaked out onto a departmental website, the minister’s office rushed to reassure the community, the media and the Israeli government that it wasn’t happening, that it hadn’t happened. Then, within hours, the minister came out and announced that it was happening, that they were doing it, that they were reversing the decision, and they happened to do so on a Jewish holy day—really? Who on earth was providing the advice? Where was the due diligence? How chaotic was the process behind the scenes to be so inconsiderate that the Prime Minister and the foreign minister themselves had to acknowledge the failure of the timing there?

It was also two weeks before the Israeli election. Even if the government hadn’t checked the Jewish calendar for holy days, surely they were aware an Israeli election was coming and that this would feed into domestic politics there? Did they speak with the Israeli government? No, not to consult in advance of providing this announcement and decision. The Israeli Prime Minister condemned the government. Mr Albanese should pick up the phone to apologise. This is a mess of the government’s making. It’s been misleading the community and an apology is clearly owed to those who have been affected by this decision. (Time expired)