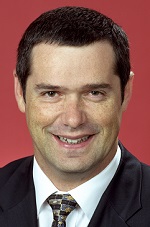 Senator BOB BROWN (Tasmania—Leader of the Australian Greens) (14:23): My question is to Senator Conroy, representing the Minister for Foreign Affairs. Is the government aware of calls, including those from the Australian Jewish Democratic Society, for Australia to back next month’s move by the Palestinian delegation at the United Nations for recognition of Palestine as an independent state?

Senator CONROY (Victoria—Minister for Broadband, Communications and the Digital Economy, Deputy Leader of the Government in the Senate and Minister Assisting the Prime Minister on Digital Productivity) (14:23): I thank Senator Bob Brown for his question and interest in this area. Australia’s position on the Middle East peace process is clear. Australia has consistently and strongly supported a nego­tiated two-state solution that allows a secure and independent Israel to live side by side with a secure and independent future Palestinian state. Australia continues to urge both parties to return to direct negotiations as a matter of urgency. The government and, indeed, the international community are under no illusions about the difficulty of such negotiations.

The Minister for Foreign Affairs, Kevin Rudd, has underlined to both sides Australia’s strong support for a negotiated two-state solution during visits to Israel and the Palestinian Territories in December 2010 and March and April 2011. Australia is a longstanding friend and close partner of Israel. We have a strong longstanding commitment to Israel’s right to security and self-defence. Australia played an important role in the 1948 negotiations that led to Israel’s creation and voted in favour of General Assembly resolution 181 in 1947 to establish separate Jewish and Arab states. This support is unwavering.

Australia is also making a tangible contribution to the peace process through our support for the Palestinian people. Since 2007 we have provided nearly $170 million in humanitarian and institution-building assistance to the Palestinian National Auth­ority and refugees. Australia is now the 10thlargest donor to the UN Relief and Works Agency for Palestine Refugees in the Near East. The government has also established a five-year development partner­ship with the Palestinian Authority, including regular budget support delivered through the World Bank and scholarships focused on disciplines critical to institution building. (Time expired)

Senator BOB BROWN (Tasmania—Leader of the Australian Greens) (14:25): Mr President, I ask a supplementary question. I gave notice of this question to the foreign minister and I would expect an answer to the question I put, which is: will the Australian government next month be supporting or opposing the move, which has a majority of countries supporting it, in the United Nations for Palestine to be recognised as an independent state?

Senator CONROY (Victoria—Minister for Broadband, Communications and the Digital Economy, Deputy Leader of the Government in the Senate and Minister Assisting the Prime Minister on Digital Productivity) (14:26): There have been a number of developments this year that have focused the attention of the international community on the Middle East peace process. The Arab spring has been one of these developments. In May of this year President Obama delivered an important speech on developments in the region, saying that the future borders of Israel and a future Palestine state should be based on 1967 borders with mutually agreed land swaps. There are growing indications that the Palestinians are preparing for some form of statehood initiative at the September meetings of the UN General Assembly. As yet, no draft resolution has been formulated, nor is the nature of the proposed resolution clear.

The government is closely following developments around a possible UN resolu­tion on Palestinian statehood. The govern­ment will make a decision on any vote closer to the time, based on principle and in close consultation with our friends in Israel and the Arab world. In our view, the best, most sustainable and durable solution to the Middle East peace process is a two-state outcome that has been negotiated directly between Israel and the Palestinians. (Time expired)

The PRESIDENT: Order! Interjections are disorderly, you know that.

Senator BOB BROWN: Will the minister give an assurance to the Senate that he will report to the Senate before the United Nations deals with this matter on Australia’s position once the resolution has become clear?

Senator CONROY (Victoria—Minister for Broadband, Communications and the Digital Economy, Deputy Leader of the Government in the Senate and Minister Assisting the Prime Minister on Digital Productivity) (14:28): I am happy to seek any further information from the Minister for Foreign Affairs in response to that final supplementary question and come back to you, Senator Brown.