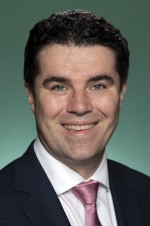 On 18 October, Foreign Minister Wong reaffirmed Australia’s previous longstanding and bipartisan position that Jerusalem is a final status issue and should be resolved as part of any peace negotiations between the Israeli and Palestinian people. This is not an extreme position. Far from it.

Mr WATTS (Gellibrand—Assistant Minister for Foreign Affairs) (16:03): I rise to speak on this MPI more in sadness than in anger. Tonight, the Treasurer will begin the task of cleaning up the mess that the previous government left to us on the fiscal front. We’ll be helping with cost-of-living pressures facing the Australian public and building a better future for our nation. I understand why those opposite don’t want to talk about the budget in this MPI tonight and why they don’t want to talk about the trillion dollars of Liberal debt that they leave this nation as a legacy, with very little economic dividend to show for it. I understand why they didn’t ask any questions, extraordinarily, about the budget in question time today. It’s disappointing that, instead of talking about the budget on budget day, those opposite have chosen to continue the Morrison government’s legacy of putting short-term domestic politics ahead of the long-term national interest on foreign policy. Let me be very clear: the Albanese government does not and will not use sensitive foreign policy to play political games. It’s not in the national interest, and the last election result shows that the Australian public are over it. They are sick of the politics of division.

On 18 October, Foreign Minister Wong reaffirmed Australia’s previous longstanding and bipartisan position that Jerusalem is a final status issue and should be resolved as part of any peace negotiations between the Israeli and Palestinian people. This is not an extreme position. Far from it.

The DEPUTY SPEAKER ( Ms Claydon ): Member for Herbert, you might not interject—you’re not even sitting in your seat. If you do it again, you will be leaving.

The conclusion that I took, and my government took, after very careful and considered advice was that a policy that is well over 40 years old, 50 years old, should remain exactly the same as it is.

Australia’s position remained consistent for decades. It wasn’t changed by the Gorton government following the Six-Day War in 1967, and all through the subsequent events it wasn’t changed by Fraser, Hawke, Howard, Gillard, Turnbull or Rudd. The Liberal Party broke 70 years of bipartisan consensus and broke with international views to play short-term domestic political games in a by-election.

The only exception to the consensus has been former Prime Minister Morrison, who exploited the sensitivity of this issue for his own political purposes. On 15 October 2018, then prime minister Morrison dropped to the media that he was overturning decades of bipartisan policy on the Middle East by going ahead with his intention to move Australia’s embassy from Tel Aviv to Jerusalem. He dropped this to the media on the same day he gave a heads-up to DFAT, and only one day after telling his then foreign minister, who he kept in the dark on this extraordinary foreign policy shift. This was a mere five days before the by-election in the seat of Wentworth took place. Then prime minister Morrison said he was persuaded by views put forward by his political candidate in Wentworth, Dave Sharma—leaving no doubt that this was a cynical attempt to get Mr Sharma elected. At the time of the vote, Penny Wong said, presciently: ‘Floating a change in Liberal foreign policy just to try and hold onto the seat of Wentworth—does anyone believe he’ll actually carry it through? This is posturing ahead of the by-election.’

John Roskam, the director of the IPA, a familiar figure in this chamber for those opposite, said at the time:

If this week’s announcement from the government truly was based on principle the test will come, not if the Liberals hold Wentworth tomorrow, but if they lose it. If the Liberals lose Wentworth and we never hear again about the embassy being moved, the PM will have succeeded in revealing that the Liberals’ commitment to furthering democracy and freedom around the world is as skin deep as a byelection campaign promise.

That was remarkably prescient, because we all know what happened next—or, rather, what did not happen next. We know that then Prime Minister Morrison was only posturing with an announcement on this issue, because he didn’t move the embassy, did he? After the by-election, just two months later, he announced that he was backing down and not moving the embassy. How cynical can you get? He didn’t make the announcement out of conviction; it was just a political tactic, playing with the sensitive topic—the hopes and aspirations of Israelis and Palestinians.

It was doubly cynical, because, before the speaker who just appeared in front of us today, the opposition would not confirm its position on this issue. This week, the opposition leader said that the coalition would make its announcement of their policy ‘in the run-up to the next election’. Senator Birmingham, the spokesman on foreign affairs, said:

Well, that proposition is at least a couple of years away until the next election. So, we think this is an unnecessary decision, the wrong decision to have made at this time. We would not have made this decision. Whether we will reconsider that position in the future is something, of course, that we would look closer to the next election cognisant of events as they unfold.

That’s not the position that the first speaker in this debate just articulated. Their cynicism is only matched by their incompetence.

As Minister Wong has reiterated, what occurred here was that the DFAT website was updated ahead of government processes. She took responsibility for resolving the situation and moved to clear up confusion as quickly as possible. She has expressed regret that the shift away from Australia’s longstanding position and the shift back have been distressing for communities that have deep-rooted and keenly felt stakes in the cessation of conflict, particularly the Australian Jewish community. She has also said that the timing of the announcement, falling as it did on the high holidays, was also deeply regrettable. The Prime Minister has acknowledged that we can always do better on process. We’re a grown-up government. We have acknowledged it. That is what adults do.

The Albanese Labor government is committed to a two-state solution in which Israel and the future Palestinian state co-exist in peace and security within internationally recognised borders. We share this position, that Jerusalem is a final status issue, with like-minded countries, such as France, Spain, South Korea, New Zealand, Germany, Japan, the European Union, Singapore, Canada, the United Kingdom, Sweden, Finland and Norway. Those opposite make like the position held by these countries is equated to a position held by a terrorist group. It’s absurd.

These are serious times for Australia’s international circumstances, and they call for serious political leadership. It’s no secret that diplomacy was deprioritised and disregarded by the previous government. That has harmed our national interest. In contrast, the Albanese Labor government has hit the ground running, renewing Australia’s closest relationships and advancing our interests and values overseas. We are in a race for influence and we’re running that race internationally.

We’re reversing nine wasted years of the Liberals and Nationals slashing Australia’s development assistance, reducing our influence and leaving a vacuum for others to fill. We are working to make Australia a partner of choice for countries in our region to ensure our security and economic strength and to shape the world for the better. Tonight’s budget will be a major step towards that goal of making Australia stronger and more influential in the world. We are building a stronger Pacific family, with a massive increase in support for development, infrastructure and security, including more than $147 million over four years for advancing Pacific security and engagement priorities; and expanding and improving Pacific labour mobility, to reinforce that we are part of the same Pacific family. Our assistance will help our regional partners to become more economically resilient, develop critical infrastructure and provide their own security so they have less need to call on others. Under the Albanese Labor government, Australia is now supporting our Pacific family more than ever before. The foreign minister has already visited 11 Pacific countries. The minister for the Pacific will visit every Pacific island country in this year.

We’re also deepening our engagement with South-East Asia, with more support for economic development, an office for South-East Asia and developing a South-East Asia economic strategy. The foreign minister has shown this renewed commitment by visiting six South-East Asian countries already. We’re strengthening key relationships, including the US alliance and the Quad. Just this weekend we strengthened our joint declaration on security cooperation with Japan. We’re supporting the people of Ukraine, with the Prime Minister showing his personal support by visiting Ukraine, as well as being one of the biggest non-NATO contributors to the Ukrainians’ defence of their homeland and advocacy for Ukraine around the world. We’re restoring Australia’s global climate leadership. As well as restoring Australia’s reputation and rebuilding our relationships, we’re cleaning up the failures of the Liberals’ and Nationals’ failures on our defence capability, which has left 28 projects running more than 97 years late.

We understand that there are few issues more central to many Jewish people than the status of Jerusalem. As Senator Wong has said, it’s more than a political issue. It’s definitional: it’s about history, faith and identity. It’s the heart of Israel’s origins and its future, and there can be no lasting peace that does not address its status. Its sensitivity is so deep for the overwhelming majority of the international community that it has always remained a final status issue that should be resolved as a part of any peace negotiations between the Israeli and Palestinian people. It should not be the subject of political games. When Australia first recognised the State of Israel, Labor’s then foreign minister, Doc Evatt, defined our objective as being to reach a just and fair solution. As Gideon Haigh noted in his biography of Doc Evatt:

No task so consumed Evatt’s energies as the division of Palestine—which is remarkable for there being almost no incentive for him to do so … Populated by fewer than 40,000 Jews, Australia had no ‘Jewish vote’ to be courted, and the idea of a homeland enjoyed far from uniform support anyway.

He did it for national interest reasons.