Gaza is a tiny coastal enclave, home to nearly 2 million Palestinians. Over 70% of Gazans are registered refugees, having been displaced in 1948 or since; and 50% are under 18. Gazans endure appalling conditions as a result of 50 years of Israeli military rule and more recently a cruel blockade. Israel occupies Gaza by maintaining control over virtually all entry and exit from Gaza as well as its coastline and airspace. Gaza is geographically disconnected from the West Bank and East Jerusalem, with Palestinians unable to travel to or from Gaza without the permission of the Israeli military.

Since 2007, in conjunction with Egypt, Israel has maintained a crippling land, sea and air blockade of Gaza.

By effectively controlling who and what can enter and leave Gaza, Israel is considered by the United Nations to be the occupying power. The blockade is collective punishment, a policy used by the Israeli military to punish all Palestinian citizens. This is strictly prohibited under international humanitarian law.

A UN fact finding mission concluded that one of the principal motives behind the imposition of the blockade was a desire to punish the people of the Gaza Strip for having democratically elected Hamas in free and fair elections.

Israel states these attacks are to defend Israel against militant groups in Gaza. However Israel often initiates attacks.  Additionally Israel has been widely condemned for its disproportionate use of force causing devastating damage to basic infrastructure—including hospitals and schools—and killing thousands of Palestinian civilians.  The blockade has impeded many vital rebuilding projects.

In 2008, 2012 and 2014, Israel launched military operations in Gaza, killing thousands.  Most recently, during the largely peaceful Great March of Return protests, Gazans along the fence between Gaza and Israel have been met with gunfire from Israeli snipers, killing more than 200 people, and wounding over 36,000—many critically or requiring life changing amputations.  The dead have included paramedics, journalists and children.

Gaza has a chronic electricity deficit—currently receiving about half of the electricity that is required. Electricity access is only 15 hours per day, and two years ago it was at 5 hours per day.  Amnesty International warns this restricted access to power “could have catastrophic humanitarian consequences for residents”.

According to World Health Organization standards, 96% of Gaza’s coastal aquifer’s water is unsafe for human consumption without treatment, requiring most Gazans to rely on trucked supplies at up to five times the price.

Gaza has grossly insufficient wastewater systems, resulting in millions of untreated or partially treated sewage being pumped into the sea.  In July 2019 44% cent of Gaza’s beaches were contaminated by sewage (74% in April 2018).

People are locked in – and out

The blockade severely restricts the movements of people in and out of Gaza.  There are two crossings open to people—the Rafah Crossing through Egypt and the Erez Crossing through Israel. These crossing are sometimes completely closed and sometimes have restricted hours. Gazans are prohibited from entering the West Bank and East Jerusalem, and vice versa. Any entry or exit requires Israeli permission.

The blockade severely restricts the movement of goods. Exports are less than 20% of what they were before the blockade was imposed, and they remain tightly restricted. Any access to traditional markets in Israel and the West Bank is very limited and inconsistent.

While import restrictions have been eased since the peak of 2010, imports are still severely curtailed. Israel restricts imports of what it deems ‘dual-use’ materials—those it believes can also be put to military use.  This list is long and vague and means Israel screens every item coming in. The list includes basic building materials (such as cement) and significantly impacts on Gaza’s infrastructure needs – house building and repairs, sewage, water and power infrastructure. These restrictions have affected everything from basic medical supplies to fisherfolk being able to update their equipment. 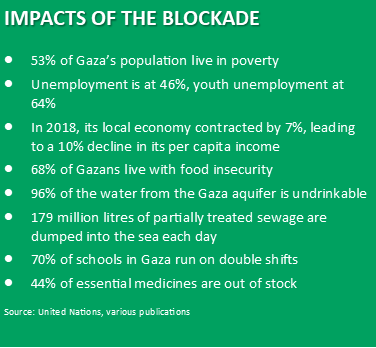