This was the culmination of a significant campaign led by APAN, where thousands of emails were sent to Labor parliamentarians; dozens of meetings were undertaken with candidates; and a significant presence by APAN at the Conference, including a Fringe Event which was addressed by 9 federal parliamentarians. On Human Rights Day, parliamentarians from Australian Federal and State Parliaments wrote to UNICEF calling for action to improve treatment of Palestinian children by the Israeli military.

The letter was signed by 95 parliamentarians of all major and several minor parties.

APAN was honored to work with Australians for Palestine to host the inaugural  Jerusalem (al-Quds) Peace Prize.

The prize was awarded to Professor Stuart Rees for his tireless advocacy for Palestine, and presented by the former Minister for Foreign Affairs, Bob Carr. 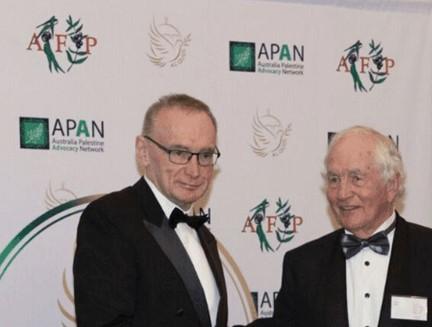 The event featured Palestinian Young people relating what it means for them to be Palestinians in Australia.

The community also participated in a flag raising ceremony as well as Dabke dancing.

Listen to the speeches here. November 2018 | Palestine Comes to You

In conjunction with our Annual General Meeting, APAN hosted a powerful evening listening to 7 young Palestinians talk about their visits to Palestine.

APAN supported each of the youth to craft their story, and hosted the evening.

The audience was deeply moved as they understood the momentous nature of a visit to Palestine for members of the diaspora. APAN facilitated a speaking tour of Military Court Watch staff Gerard Horton and Salwa Duaibis.  Gerard is an Australian lawyer now based in Palestine, and Salwa is a long-term Palestinian advocate for women’s and children’s rights.    Military Court Watch focus specifically on the breaches of Palestinian children’s rights in the way they are arrested, held and tried by the Israeli military system.

There were 21 public events and private meetings during the ten day tour, in six different States.  Events were held in Federal parliament as well as three State parliaments, and private meetings were held in political offices and with the Department of Foreign Affairs and Trade. They met with a significant number of legal groups and public events were co-hosted by legal groups.