Israel and Arab normalisation deals—normalising the oppression of Palestinians

The establishment of a Palestinian state and a just solution for Palestinian refugees are two of the most central and long-held pre-requisites for recognition of Israel by Arab states. However, in 2020, several countries abandoned these principles and normalised diplomatic relations with Israel. These US-brokered agreements excluded Palestinian people and their representatives, trading Palestinian rights for economic, military and geopolitical gains.

Historically, the consensus among Arab States was that normalised relations with Israel would be withheld until a just solution for Palestine could be achieved.

However, on 15 September 2020, Bahrain and the United Arab Emirates (UAE) signed normalisation agreements with Israel. On 23 October, Sudan announced its intention to normalise relations (formally signing an agreement on 6 January 2021), as did Morocco on 14 December. Collectively, these agreements are referred to as the Abraham Accords.

Before 2020, only Egypt and Jordan had normalised relations with Israel. These agreements, reached in the course of post-conflict peace negotiations, were primarily about Israel returning territories. Relations between the countries remain cold.

In 2002, the Arab Peace Initiative was endorsed by the Arab League. The Initiative offered Israel a formal peace agreement and full normalisation of diplomatic ties with Arab States, in return for:

The Initiative places Palestinians at the heart of the peace process and diplomacy. In unilaterally normalising relations with Israel, the governments of Bahrain, the UAE, Sudan, and Morocco have abandoned their commitments to the Initiative and to the Palestinian people.

It is important to note that the normalisation agreements reflect the political agendas of these repressive regimes, not the will of the people. Support for the Palestinian cause and the principles of the Arab Peace Initiative remains strong throughout the Arab world.

What is gained by normalisation?

For Israel, normalisation legitimises the status quo. The brutal military occupation, the blockade of Gaza, settlement expansion, and the blocking of the return of Palestinian refugees are at least tacitly accepted.

For the USA, diplomatic relations between Israel and Arab States challenges Iran’s regional influence by strengthening the US-Israeli-Saudi bloc.

For the autocratic rulers of Bahrain and the UAE, normalisation shores up regional support for their repressive regimes and opens up trade opportunities. These include significant arms deals, providing access to high-tech weapons and military infrastructure. (It remains to be seen how these deals will progress, as in January the incoming Biden Administration put a hold on the sale of 50 F-35 advanced fighter jets to the UAE.)

For Sudan it means removal from the USA’s list of state sponsors of terrorism and the restoration of international aid and investment.

Morocco has been rewarded with US recognition of its sovereignty over the Western Sahara, providing a cloak of legitimacy for its illegal occupation of the region.

For Palestinians, normalisation represents exclusion from the peace process that will determine their future and guarantee their freedoms. These agreements will not improve the lives of Palestinians, nor advance any resolution for justice and peace.

Is this a peace deal?

As Israel has never been at war with Bahrain, the UAE, Sudan or Morocco, the normalisation arrangements cannot be categorised as “peace agreements”.

Peace in Palestine means the active participation of Palestinian people and their representatives in negotiations and decision making. 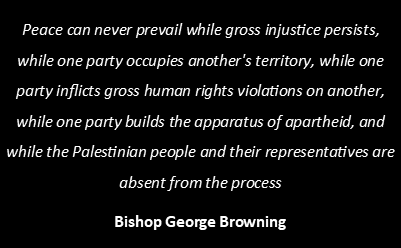 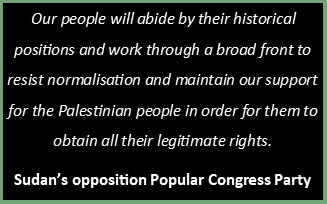