Against the Loveless World 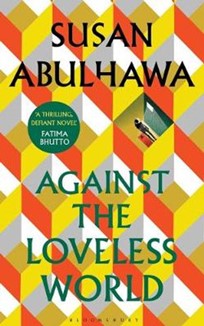 With ‘Against the Loveless World’, Susan Abulhawa has produced another powerful story of Palestinian resistance, a passionate, political tale.

Not simply a novel, this book is part thriller, part history lesson, part love story, and part radical-feminist manifesto. Nahr, the storyteller, is a woman of immense strength. We are immersed in her early life in Kuwait, then in Jordan, then in Palestine, interwoven with the thread of her life in The Cube, her highly sophisticated prison cell in Israel, where she must clamp her hands to the wall before anyone can enter. The lights, shower and toilet flush happen at random times so time becomes unreal.

The silence of solitary confinement is altogether different than the soothing, promising silence of the sky. The quiet here has a sharp, jagged edge that tears at my mind.

And we follow the journey that led to her imprisonment.

The history of Palestine since the Nakba positions the narrative, but it also takes in other key recent events in Middle East history such as the rise and fall of Saddam Hussein and the US war against Iraq. Nahr even predicts current events:

The Saudis are all too happy to appease. They’re as bad as Israel! It wouldn’t surprise me if we don’t wake up in a few years to learn they’re working hand in hand with Zionists, probably against Iran.

Abulhawa explores both gender and sexualities throughout the book, embedded in a powerful political action narrative.

Born to Palestinian refugees, her childhood and adolescence in Kuwait is free and enjoyable, although even as a child, Nahr is a rebel, making trouble in school to stop her brother from being bullied, and defying expectations of being a girl. As a young woman, Nahr explores the boundaries of both sexual pleasure and sexual abuse, always conscious of providing financial support for her family – mother, grandmother and brother.

Forced to flee Iraq after the US invasion, Nahr and her family move to Jordan, and at first reluctantly, she visits the West Bank of Palestine. The place and the people grow on her and she finds both love and a commitment to liberation.

What engaged me most in reading this novel was that I expected Nahr to ‘need’ the reader, that I would need to will her through her ordeals, but at every turn, she does it all herself, in her own way, with her own strength. In some ways this creates a distance from the reader, but it also makes the character even more awe inspiring.

Whilst this is Nahr’s story, Abulhawa also presents others in full dimensions, and uses both humour and pathos to good effect. For example, when they are living under 24 hour curfew during the second intifada, friend Ghassan exclaims:

Those stupid motherfuckers are terrified we’ll outnumber them, so what do they do? They imprison everybody at home for months with nothing to do but make babies. And now there are thousands of little demographic threats. It’s damned poetic!

And describing her mother’s embroidery:

(Mama) would spend hours upon painstaking hours hunched over her lap, needle and thimble pulling and pushing threads in and out of fabric, creating patterns that told the stories of our people in a pictorial language (Tatreez) conceived by Palestinian women over centuries. Mama was fluent.

This is a story of love, for an idea, for a place, for a people and for a person. Overwhelmingly for me, it is a story of a strong, powerful woman, complete in herself, and through that, able to take on every challenge of love and life under occupation. Devour this book and join the movement for a free Palestine.