Still lives: A memoir of Gaza 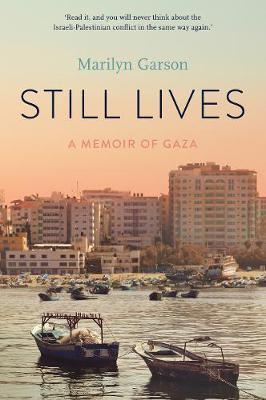 As a leader of an NGO program, and later as a senior United Nations irregular, Marilyn Garson worked in Gaza for almost four years. This period included working through two Israeli assaults, the second the infamous attack in July-August 2014. This dense and historic background presents many choices to a prospective author.

Garson says what she has written is a ‘memoir … a raw cut at a life in progress.’ This memoir ‘concentrates on a single work stream’ – the development of a complex IT social enterprise. This is a clearly stated purpose, but what the reader encounters is not of a piece. Rather, what is delivered in this astonishing book is a complicated, imperfect weave. Part first-hand, but outsider, account of life in Gaza before, during and after Israel’s attacks, part exploration of women’s ways of being and relating in this setting, part account of the initiation and evolution of a social enterprise and, perhaps most surprising, a reflection on the author’s evolving, transgenerational and contested Judeo-Jewish identity. Along the way, there are political points (e.g. ‘Gaza is not Hamas’), links to source documentation, original turns of phrase, and arc-light brilliant observations: ‘The unblinking drones completed the box of Gaza. Every outlook was finite and mechanized and armed.’

The book appears less successful as an account of a social enterprise than it is as a first-hand report of an atrocity – Israel’s 50 day bombardment of Gaza. Garson outlines much that occurred in this horrifying period: the intense, systematic, accumulating destruction, the enduring resistance; the effects on subjectivity and sociality. There is also a description of Garson’s role in the UNRWA’s attempts to shelter and support up to 200,000 Gazans. Around 50 of the book’s 266 pages tightly wrap the reader within an intense account of living through this gigantic crime. This knocks one about, it really does.

At key points in the narrative Garson reports being pre-occupied with Israel’s disregard for the internationally accepted rules meant to govern military behavior. Simply put, Garson finds it incredible that Israel would deliberately transgress norms relating to the safety of civilians. Deeply rooted assumptions die hard. This is especially so for those related to ‘us’ – the ‘we’ of religio-cultural identity. Our kind – in Garson’s case Judaic-Jewish people – are not uncivilized; we do not act barbarically. She comes to see this is an illusion. This is a deeply disturbing conclusion: ‘what am I going to believe: everything I’ve ever been told or the world in front of my eyes?’

A potentially contentious theme in the book concerns Garson’s decision not to disclose her Jewish identity; until the very last days of her stay, this was a secret even to the Gazan women with whom she worked closely. Garson was deeply conscious of the difficulties this decision presented, as she was of her reasons for withholding, and was both relieved and joyous that she was still loved after finally telling her intimates the truth (This acceptance was not immediate; as would be expected, some ‘processing’ had to occur first). That Garson was not eventually understood as a con-woman betrayer, that she was not viewed as someone who had become an intimate by being dishonest, can be contrasted with the reaction of Muslim women when they found out that Geraldine Brooks, a journalist they had come to trust, finally declared she was Jewish (see: Nine Parts of Desire: The Hidden World of Islamic Women). That Brooks and Garson experienced contrasting reactions to what was, in categorical terms, the same ‘omission’ can be interpreted in different ways. What I think is central in understanding this divergence is that Garson, unlike Brooks, did not bring an embedded sense of superiority to her encounters. Across much that divides, it seems a wellspring of sisterhood united Garson with her broader kin.

This review misses much that deserves appreciation, and also points that are well worth debate and criticism. Because so much has been ventured, tough-minded readers can definitely look forward to a thoroughly stimulating read.

For paper copies of the book, please email [email protected]